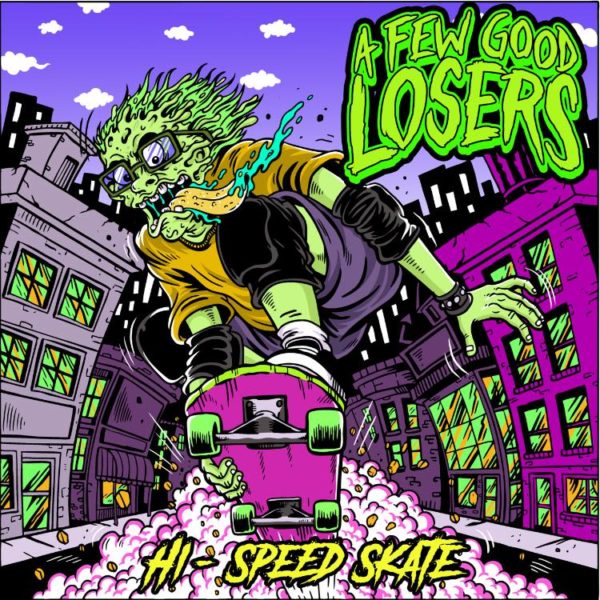 A Few Good Losers and Hi-Speed Skate. The mind boggles. What in the ’90s of Skate Punk could this possibly denote to? While such a ponderous subject is deconstructed, a band by the name of A Few Good Losers from the suburbs of Atlanta, Georgia beckon your attention. Which, interestingly, is of paramount prominence, relevance and naturally occurring proximity to the above. For A Few Good Losers have just released their debut full-length, Hi-Speed Skate and it more than has a penchant for the ever-robust legacy of ’90s Punk-Rock. Shall we?

A Few Good Losers are still relatively new to the contemporary Punk scene as a unit. However, within seconds of the emotionally down-trodden, post-relationship-nullification of ‘Blank Stare’, a band that are the culmination of four-dossiers of sufficient study present themselves. ‘Blank Stare’ breathes melodic, yet jagged and buzzsaw ’90s Skate Punk in a hunk of plain and simple catharsis. The band, however, via better production, still manage to hit the vintage nail on its dated head. A Few Good Losers sit easily comparable to legacy-stalwarts such as Lagwagon or Pulley but also contemporary scene notables such as The Raging Nathans, Raincheck and more. The scene is vibrant, indulge in it.

‘Scandalous Evangelist’ joins the fight of Punk against archaic systems of control. A Few Good Losers are beyond appealing to vintage Skate Punk fanatics but that’s not their main event. Much akin to the likes of The Raging Nathans, A Few Good Losers are articulating raw-thought-to-words as natural as the initial catalytic feeling that inspired it. ‘Religions just another word for dementia […]’ and other ear-worming lines mark track two as some of the band’s best sardonic, sarcastic and playfully on-point topical wit.

‘Flat Earth’, much in the tradition of  ’90s Punk, further pushes the band’s jagged up-beat Skate Punk forward enabling a passionately and mildly humorous reverse-jibe at stupidity. A Few Good Losers are consistent in their melodic approach but in ‘Flat Earth’ subtly apply contrast. The four-piece consciously push towards harder, heavy-set strings in the verses and deeper drive in the chorus. Following on, ’90s Punk is nothing without is drastic cuts in pace and ambling Pop-Punk sensibilities. This is where the witty and lonely story of ‘Grim Reaper’ finds itself.

Archetypical Pop-Skate Punk reminiscent of MxPx shreds its way through crooning existentialism in ‘Fear Of Missing Out’. The band take a youthfully-toned approach but still illuminate a contemporary irritant. That being the all too real and indomitable indiscriminative power of social anxiety and overthinking. If Skate Punk is symbiotic with Pop-Punk on the one side, then it indisputably shares another union with Melodic Hardcore on the other. The band tribute this stylistic genealogy through the excellent, relentless tempo-unto Hardcore riffage and repeat that is ‘Miller Killer’. Although Jason Glenn’s vocals are adaptable to however the band spin their Punk, his harder approach is a welcome variety.

‘Overthinking’ sees the return of the enemy. However, the aforementioned indomitable force is now painted with the crosshairs of determination. Track seven toasts shred-heavy Skate Punk but boasts another collection of easy-absorbing premium quality resonation. A Few Good Losers sound as they wish, say what they wish and do so to the very definition of intrinsic. ‘Love Song’ alternates vocal responsibility in its Pop-Punk classicism rife with the genres less-refined roots. ‘Love Song’, despite being the track you’d expect to glide by unremarkably, is key to the flow both A Few Good Losers and Hi-Speed Skate.

The 0:50 of ‘Poverty Pimp’ is an energised blast lambasting an undesirable character. It is here that Joshua Drumm increasingly shifts onto playing further lead as opposed to the robust serrated rhythms of AFGL’s norm. Much akin to the likes of Cigar and early Lagwagon to name a few, the band are melodic but sparingly and place their whirling solos and threading-lines only where they are required. A criticism? That would depend on what you prefer. ‘Social Casualties’ reminisces the great “talk” of our “betters and elders”. The band’s wit eschews the cliché of topical lyrics and toasts to those who followed their own path. Drumm’s lead is further active and will undoubtedly sound pleasing to Adhesive fans.

“You’re generation does nothing but moan like little snowflakes and expect everything”. The cliches attached to millennial culture canvas all the good that this generation is trying to achieve. ‘Born Millenial’ mocks such cliché but juxtaposes the generalisation and disregard. How? Well with one important line – ‘You think we’re worthless, but I must protest, there’s still several things to address, so let us show you, what it’s like to be born millenial’.

Hi-Speed Skate, stylistically speaking, is absolutely nothing new, but then again, why would you assume it to be? The release tributes to a time where Punk realised that being political wasn’t simply the be-all and end-all. A time where bands directed and showed their inner frustration in a manner exponentially more open. A Few Good Losers at absolutely no stage of this debut full-length allow your attention falter. In but a few words, Hi-Speed Skate is a monument to Skate Punk classicism and is enthrallingly brilliant in every aspect. Change my mind.

Downard and Their 'Permanent Damage'