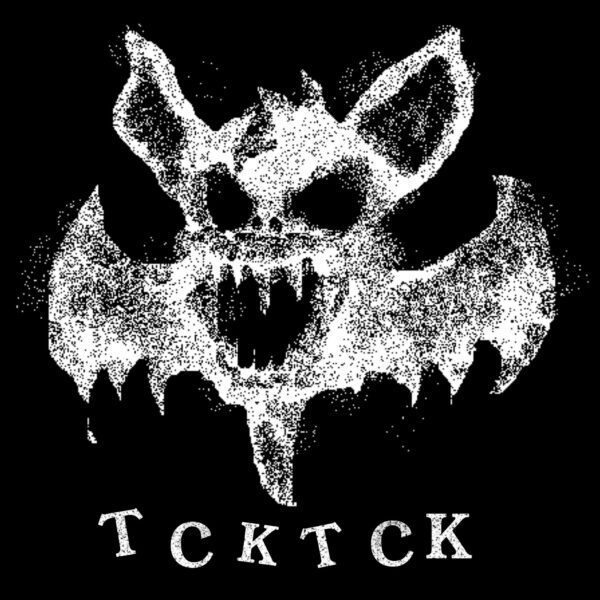 Ah yes, Bristol, what is it up to now? Well, that would be the VIDEO PREMIERE! and INTERVIEW! of TCKTCK and ‘DEMON FACES’! It was so much simpler to regurgitate that title than to over-explain in some grandiose, needless manner. I’ll save that for another time. I shall gather more information from the scene-spanning horse’s mouth shortly but for now, to summarise, this is how TCKTCK are to be described. And yes, THE CAPS ARE NECESSARY!

The Bristol-based project began sometime before Christmas last year. This very article is the bonafide debut and announcement on this very well seasoned-south west unit. TCKTCK are a collaborative whole but are in no small amount owed to the creative prowess of one Mel Pereira, who you may remember from such noisy outfits as Ghost of The Avalanche, Alkahest and Brasher. TCKTCK are a new being taking in the ubiquitous nature of Hardcore Punk and all that is has fostered. ‘DEMON FACES!’ is the very first product being set free in its overdriven, adrenalised birthday-suit as a sample of the chaos SOON TO ENSUE. Not that there is anything else on the way.

SPOILER ALERT! There is and within the project’s theme, it is just as OBNOXIOUSLY TITLED as you’d expect. FLYING DEATH RATS! is set to kick the door down on the 12th March. Metaphorically speaking that is. OR IS IT? Who really knows but Worth Every Penny are handling the digital distribution while the spool-obsessed Killing Moon Records are keeping it physical. 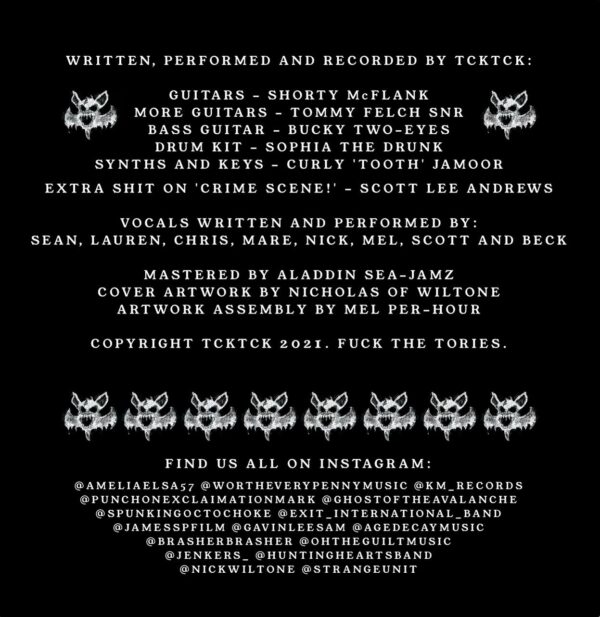 But what of ‘DEMON FACES’? Well, as singles go and I’ve heard the full release, it’s pretty chaotically indicative of the voraciously vehement brand of TCKTCK Punk-Rock found on FLYING DEATH RATS! Deep, rumbling Post-Hardcore spins the chaos of OG Hardcore into overdrive and then plies it in a combustive cocktail with its former self. All the while, a low growl subsisting off all this instrumental rage then moves to feed it in a maniacal symbiosis while dragging itself across a splintered floor and loving it. Oh, and it’s over in forty-one seconds.

I caught up with Mel recently and this is what ensued.

Right so, in the most off-the-cuff obnoxious way possible, who are you and what the devil is a TCKTCK?

I am Mel and I’m a musician in Bristol. A TCKTCK is what you get you’ve been deprived of your usual musical outlet (and need somewhere to release a backlog of ideas) combined with a feeling of ‘music is too serious a lot of the time.’

I wanted to just put out some music that’s not pretentious and just a bit of fun, basically.

I’m sure you can be more obnoxious than that but then again, I’ve heard the album! Was there a defining moment in wanting to do this or did you just fall into it?

Ha! I wouldn’t say there was either, to be honest, I’ve had a lot of these riffs around for a while that weren’t quite suitable for my main band Brasher, so I laid some drums down to go with them. It opened a huge flow of similar ideas to the point where I had the basis for this album in a couple of days. So I kinda fell into it, after wanting to do something with the “scraps’” from the cutting room floor, if that makes sense!

A couple of days? That’s impressive but then again in all the years I’ve known you, I’d say you’re just “pulling a Mel”. So other than the colourful characters named on the back cover of the forthcoming album, what was the catalyst for getting all the comrades involved and how did you choose them?

Haha, I like that! I basically didn’t want to do “another album that’s just Mel” as I have Alkahest for that outlet. I love the Dave Grohl Probot album where there’s a different vocalist for each track, so TCKTCK is kinda my own version. I knew I wanted to get Nick from Ghost Of The Avalanche in (who ended up also doing artwork and being my main encouragement to finish the album) as we have a long history of music together. Scott from Strange Unit was another must-have (I’m a die-hard fan of most all his music, Exit International and Mutation specifically) and was beyond stoked when he added guitars and synths to his track as well as vocals. Beck from Hunting Hearts was my third must-have, HH and Brasher have a short but rich friendship and I wanted to get some more crossover between them via this project.

Everyone else was from a call out! I have so many talented, beautiful friends that I’d have never been able to pick from, so I said ‘who wants to do a track on this project’ via my personal Facebook and let them come to me. I wasn’t disappointed with any of the responses at all.

You seem like you really enjoyed the whole thing! It’s nice to see people coming together to make something positive and reflective of the DIY scene’s talent. Could this be a precursor to something else perhaps?

I found the whole thing really good fun to create, I’m really excited for people to hear it. I don’t think it’ll go anywhere further than this album, I might write another one down the line but I have no plans to. Doubt I’ll ever gig it either unless I can be convinced otherwise …

So how many tracks are collaborative and how many are just you? What are your favourites from either of those “camps”? If you have some that is!

Five of the songs are my vocals, the other seven have guests on doing their thing. All the lyrics were written by the people performing them, except for TREBUCHETS! which was performed by me but written by my pal Nick Woodland, a long-time collaborator with Alkahest.

It’s hard picking a favourite, it honestly changes every day. I love ‘IT STARES BACK!’ which is Chris from Age Decay/Oh, The Guilt. Chris absolutely nailed this one, I was really excited to have them on board. I love ‘BLOOD FETISH!’ as well, I genuinely wet myself laughing when I listen to it. The fave track that I vocalised is probably ‘DEMON FACES!’ or ‘LIFE LESSONS!’ as they were both great fun to record.

How did you find allocating the tracks to those involved and how did you decide on how many you would take full control of?

And, just while you’re here and before we leave people to enjoy the video premiere, do you have anything to say about any of your other projects at all? Brasher released a double single recently and you unleashed another proggy-maelstrom with Alkahest on YouTube only. Are there any Brasher plans on the horizon or do you plan to give the latter any more time or reach?

Finally, if you had to describe the release simply? How would you do so?

The allocations were totally random, I didn’t think about it at all. The tracks I took were the ones left over after assigning the contributors, I’d tried not to think about any of it!

Brasher have no real plans to do anything for some time. I have a huge pile of songs and ideas written for what will become album two but with no access to our rehearsal space we can’t really do anything. Releasing the single and trying to juggle shows during the relaxed restrictions last autumn was surprisingly stressful with constant government changes and we’ve basically resigned not to do anything until there’s some certain stability in the world.

As for the Alkahest album, that was something I’d been working on for about ten months and it finally felt ready to release. I chose YouTube as its quick and the album is gapless, I didn’t want people to be able to skip through easily. I might’ve started recording the follow-up …

I think TCKTCK is just a stupid bit of fun that doesn’t take itself too seriously and I honestly think more bands need to have this attitude. Too many musicians take what they do too seriously (myself included!) and it’s important to step out of that from time to time and write or release something silly instead of trying to create a perfect, polished piece.

And so, TCKTCK and ‘Demon Faces’:

That was that then! The debut song, video and insight into the writhing mass that is TCKTCK. The physical limited edition release pre-order can be found via the band and Killing Moon Records below. FLYING DEATH RATS! will also be on streaming services upon release! The 12th of March is the day!

Don’t forget! When you’re finished, seek out Brasher, Alkahest and all the bands involved in the project.