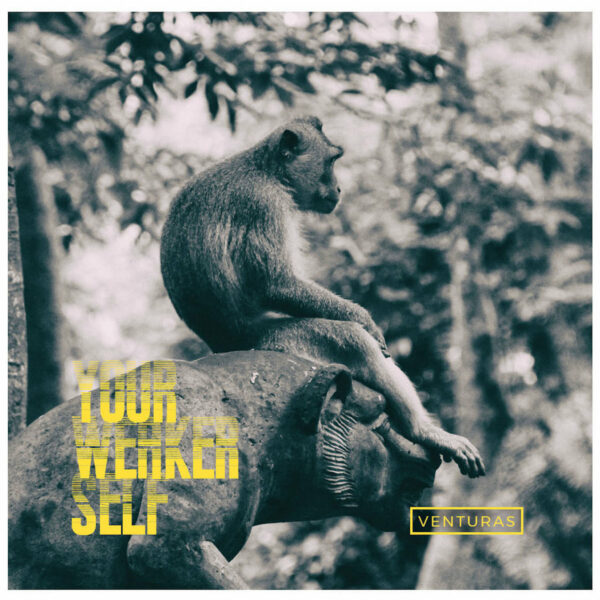 Ah yes, the indomitable soaring of melodic Skate Punk! Enter Venturas and Your Weaker Self. It is true that many consider the genre dead and haven’t listened to anything since 1999 or 2005 at a push. I will say now, with no verbal faeces given, that such an ill-informed statement is absolutely nothing but willful incredulity. Though many of the trailblazers are still active, though even that is often ignored, the contemporary Skate Punk scene is at the top of its game. If the past ten years have taught us anything, it is that Europe exports innumerable fast drumbeats, noodling dual-lead complexities and heartfelt Punk-Rock navigating a fierce Thrash-infused madness. So yes, Venturas and Your Weaker Self then, yes?

The band’s previous EP, which is included on side B of the vinyl, tracks six-through-ten on the CD and on the digital bandcamp release, is essential listening. So, I implore you to track it down either now, or after you’re finished here. This is especially the case if bands such as Straightline, One Hidden Frame, Head Honcho, Zombies No, Protected Left and A Vulture Wake tickle your little ears. Moving on!

Your Weaker Self opens with a two-stage intro in ‘Faded Memories’. It is important to remember, that despite sometimes seeming otherwise, that Venturas are a three-piece and recorded this EP live. ‘Faded Memories’ from its emotive lead onward to its late-’90s catapult through precise, but far from overcomplicated technical Skate Punk, sets the playing field. Or does it? Despite charging forth in the expected, the band alternate into the very opposite. The emotive meandering guitar tone leads a weary and choppy-mid-pace through the tedium and then onward back to the hurtling known. Division is a curious operative. The band’s constant tempo-alternating melodic to serrated Punk is the note-perfect sonic replication of their thoughts on the matter.

‘Waves To Follow’ echoes a vintage One Hidden Frame crossed with A Vulture Wake whilst calling back to the aggression of the band’s previous EP. Venturas are more melodious here but are by no means toned down. Though existing as a three-piece Skate Punk band is comparatively rare these days, Venturas fill the space a fourth body would sit with a confident stride. Track two expedites Venturas’ penchant for Thrash without forgoing the harmonic and heartfelt emotional resonance of the modern genre.

‘Label Free’ occupies the middle of EP with a purpose. Though recorded live, through production clarity, the rate at which the band’s proficiency has truly increased is clear. Three is another slice of late ’90s proto-tech-Punk conditioned with the breakneck, tightly wound everything from the early 2000s and onward. Venturas’ constant deviations in tempo are just as indicative of this increase in skill as the lightning-fast drum fills and seamless everything else. There is no room for error with this band. Venturas are clearly inspired by Skate Punk either side of ’99 and as far forward as the wonderfully grandiose records of the past few years and own it resoundingly. This is a band that nail a key point in the “market”.

The eponymous Propagandhi-esque ‘Your Weaker Self’ is further proof of how unambiguously excellent this band are. Venturas command your attention. Again, their precision permeates their efforts without treading in too much proximity to the ultra-tech Punk that many do so well. The band regard such with high esteem but carve their own path. Their viciously ferocious rhythm section takes this conditioning and produces a hybridised variant of what inspired it in the first place.

‘Empathy’ steals the show as it closes Venturas and Your Weaker Self. If you were to choose one track to encapsulate the Venturas sound and emotional occupation for that matter, it would be ‘Empathy’. Both track five and the EP as a whole are ambitious. Venturas’ emulation of the ultra-tech sound is seamlessly applied to what inspired it. Their guitar and vocal melodies allow the tempo deviations to lose none of the tempo-junkies transfixed to their impressive speed as their emotive lyricism and harmonies beckon you despite their intensity. ‘Empathy’ though subtle in comparison, still punches fervently through the soaring nature of itself, in reminder and hybridisation of the Skate-Thrash the band so effortlessly command throughout Your Weaker Self.

But does anyone really care what I think? Venturas and Your Weaker Self is a self-release with both Mud Cake Records in Germany and Lockjaw Records in the UK assisting with distro.