Think On It – Isle Of Wight, England, United Kingdom 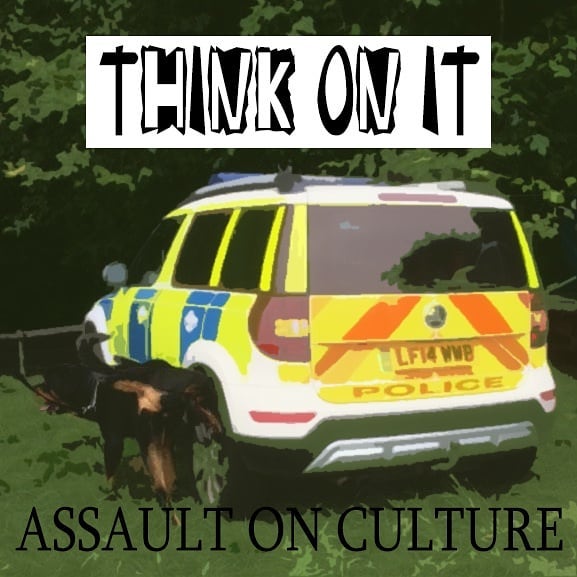 In typical fashion and likely through the fault of myself, whenever a Punk music scene becomes prevalent or even but sparks on the IOW, I’m not there. Circumstantial woe completely aside, the band’s debut EP begins with the 0:56 archetypal silly Punk song, ‘Wet Sock’. There isn’t much to say on the track other than that it is what it is and what it is boils down to said amount of time dedicated to ’76-’77 Punk grit.

Thankfully, ‘Empires, Kingdoms & Cuntries’ is a little longer and has stylistic callbacks to Die For Government-era Anti-Flag. The second track a product of a sardonic wit itself resultant of looking out into the abyss of modern life. Think On it-brand Punk isn’t one of overt displays or gratuitous amounts of showing off but rather an emulation of how it all started way back when. Admittedly, clarity and production issues are present but again, as I’ve said before, within underground music, there is a certain amount of such that can be forgiven and furthermore understood.

Speaking of which, although this is something relevant to ‘One Man Revolution’, the tracks other credentials stand it in better stead. Musically, Think On It maintains their vintage Punk-Rock ply it with noticeably more melody and albeit slightly more modern infusion. Lyrically, Think On It, are clever and yet entertaining within their choice words. The semi-spoken-word struggles somewhat in places but still naturally suits one of the better tracks on the release.

‘Dog Days’ is testament to the youthful exuberance of Think On It and likewise towards their tribute to the days of Punk gone by. Track four of six may well have been written by the Dog on the album cover, but that is a question for another time. ‘Dog Days’ is perhaps one of the more enjoyable tracks on the release and one I can imagine is a treat live as its laden with humour and grit hard not to like.

’12 Thousand Men’ is where the band suddenly change pace and particularly aesthetic almost entirely. Notably, the track makes use of an 8-string-orchestral backing throughout. Within the context of Assault On Culture, this is a little unexpected, especially if this is the first you’ve heard of the band. ’12 Thousand Men’ was the forerunning third single for the EP.

However, stylistically speaking, the tracks idiosyncrasy is more so in part to its influences nearer to contemporary Punk or at least more recent. Yes, the melodic-Punk sound – ala Rise Against – is in complete contrast to the rest of the EP, but it is one I hope the band experiment with further.

‘London Bridge’ closes and sends your ears back to a time where Theresa May was still the head of our not-so-great nation. Fittingly, production, sound-levels and clarity aid this anthem of distrust and raw Punk disaffection that leaves you pondering onto how the band are reacting to more recent events?

Assault on Culture is debut EP via Think On It that may have its issues, but what debut doesn’t? Crucial, in juxtaposition to such, the release cathartically expresses itself with a conviction rather difficult to fault. Think On It are in the garage with their bullshit detector and this is only the beginning.

Physical copies of the release can be purchased from the band and include the bonus track, ‘A Corporate Christmas’ which you can also find via the band’s Spotify profile.