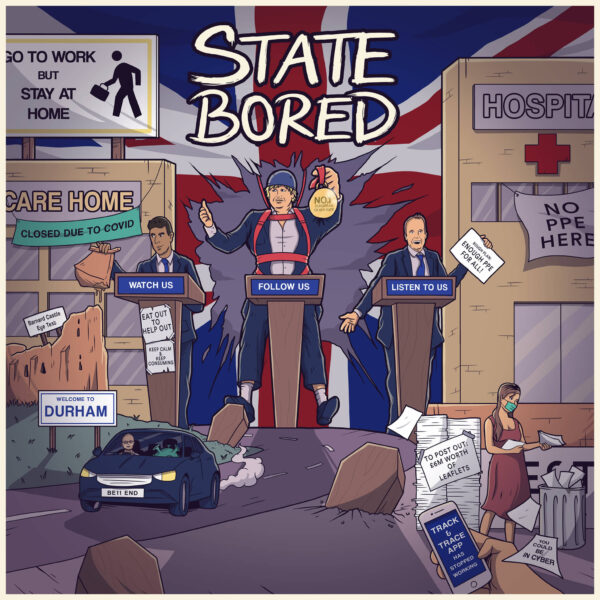 Statebored and ‘Statebored’ were another entry into the melodic Punk-verse earlier this year. The project is based in London and attributed to one fellow London-based collective, Forgotten Names. You can read about and get to know the band’s fledgeling state  – Here – but for now, it is their vocalist and his state-tedium that is important. In a nutshell, Iain Russell of London-town is rather bored of the state he inhabits, and ‘Statebored’ is the product.

I could continue to farm for synonyms of the word “bored” but that would end-up becoming the very definition of the word. The sound of ‘Statebored’ is considerably different to Russell’s work in Forgotten Names. The debut single still occupies the same space of melodic Punk but in this very expanse, it is but a dot on the skyline from where Forgotten Names sit. ‘Statebored’ is exponentially harder. The debut is inclined to Thrash and its own protrusions into Skate Punk and is also harmonic to say the very least.

Full disclosure, this is a political song. So if you can’t ignore that, then it might be worth moving on. ‘Statebored’ is an emphatic cathartic release. One that is in a nutshell, lambasting the response, hypocrisy and continuing twattery that is the Conservative Government’s handling of the pandemic. This of course, all the while exiting within the Brexit-sponsored wall of the downward spiral that is the UK. However, enough of that before I fall into a socio-political rant of my own. Well, more so.

The debut opens upon a cycling drum-beat, kinetically charging itself towards powerful Thrash-Punk. This is then surprisingly contrasted by a soaring, key-led line rather than a guitar. This results in the track’s axes falling into the jagged rhythm-section bolstering its Propagandhi-led Skate Thrash as it rages against a nation’s intellect falling under a cloud of disrespect.

Bereft of positivity, the track dances in and out of it’s more obvious Thrash-Punk but retains its tightly-wound ferocity into its almost crooning and streamlined melodic ’90s sound. Vocally, Russell is reserved and sombre. That said, in unison with the backing vocals, the high-pitched precision metallic lead and the soaring keys, his efforts are but a layer within the greater harmonic whole. ‘Statebored’ is quotable and topically en-point throughout. That said, it is in the slower-chorus where the hammer is hurled at the nail. I say “slower” but there is never a point where the tracks resoundingly Metal-dominated drumming is ever slow. Russell’s displays are perpetually energetic and laced with charged-spasmodic fills imbuing greater variety alongside the notable keys.

This is a project of lockdown origins. So, with that said, the track’s recording and production is obviously relatively reflective of such. However, with all things considered, clarity isn’t too much of an issue. It is also notable that this first offering is part of a set of tracks on the way this year and will likely be re-recorded. Digression aside though, it is safe to say that ‘Statebored’ enters the Skate Punk fray as a pissed-off entity and decidedly bares all.