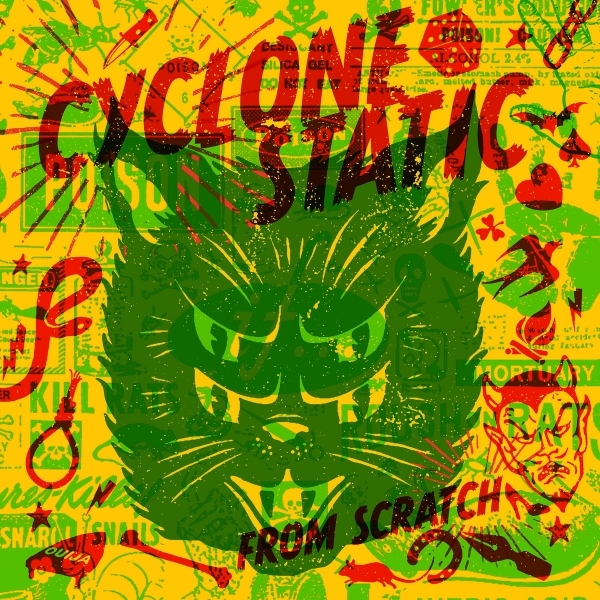 If you were to take the melody of 90’s Punk and Alternative Rock, bypass Grunge for the most part, infuse this with the Pop-melody of early Rock, it’s gritty cousin Garage Rock and then said cousins own eventually successor Punk and allow them to have some sort of (possibly) sexual encounter behind closed doors I’d imagine you’d end up quite intrinsically with Cyclone Static and find yourself somewhere in New Jersey.

Once again, the whole point of these “Sound Bite” pieces is to emphatically tell you (not you) a few reasons in order to catalyse a rush to listen and know more (kidding – yes you) about whoever the hell it is I am rambling about. That or describe whoever in such a literary fashion that enticement if the only outcome, either way, in this case that would be the NJ three-piece in question.

There is no doubting that Cyclone Static are a Punk band and capture a great deal of what made the genre so successful via a Proto-Punk crossed with Post-Punk approach. Heavy Blues-Punk bass-lines and Garage Rock guitar lines greet you alongside witty, sardonic lyrics of classic Punk distaste in the ‘Walk The Line’. All the while a different line joins the hook and sinker in your ensnarement. Find it amongst hours of fun – Here.

Cyclone Static are an excellent entity in the crafting of Pop-songs in the best way possible, as after all, just because a Punk song is tuneful and inviting a sing-a-long doesn’t negate its meaning. A good song is a good song as much as a valid point is indeed itself. ‘From Scratch’ is very much that but twisted with a flare of contemporary Indie-Rock, itself something you’ll find throughout your listening experience with Cyclone Static. This tuneful, playful catharsis isn’t limited to thus however, as tracks like ‘Runaway’ charge the band’s sound with tempo most welcome.

‘Company Man’ merges a gloomy sound with the band’s Pop-sensibilities themselves simply glossing the Punk-Rock with a thin proportionally satisfying layer. This darker approach plies more typical classic Punk across the three-pronged board in ‘Everlasting Glow’ and ‘Circles’, while the bluesy-ebb of ‘Sacred Island’ shows a band clear in their aim, craft and life.

But what do I mean? Cyclone Static are tight, well-produced and committed to their sound, that much is obvious but what is perhaps the most excellent part of it all is how wonderfully simplistic the band are. That is not to say that they are simple to the point of monotony but rather to the point of flawlessness in regard to how they are executing what they want and nothing more. Whether the faster classic Punk or Garage Punk, Blues-Rock reverb and ebb of the stripped down Alternative Rock of the likes of ‘Ordinary Days’ (find it – Here) it matters not, this band are excellent.

Thats the gist of it anyhow, it’s up to you to indulge further. The band are currently signed to Mint 400 Records.

Luke Seymoup – ‘Hand Me Downs/Life Got Me Down’ + UK Show Announcement.