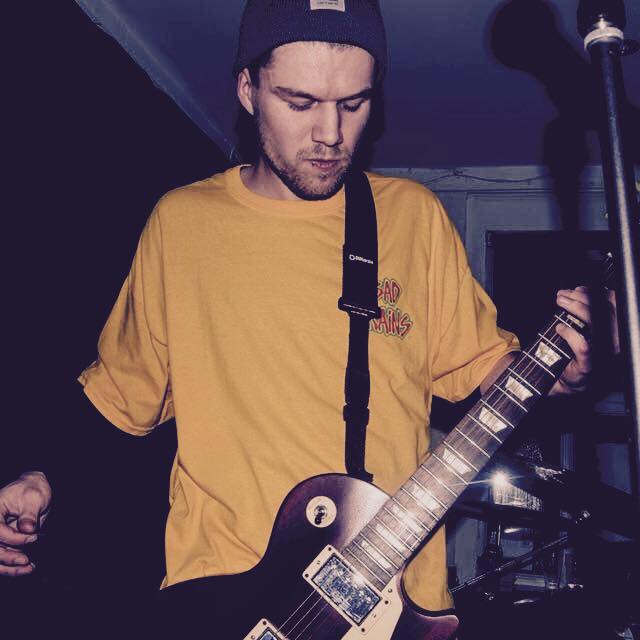 What started as a simple Q&A became an interview spanning ages and that I will firmly state is not a criticism. For Charlie Jones-West of SickOnes is a young man committed to the craft and ideology of the explosive and energy incarnate three-piece.

*This being the first interview for EN, this was written a little while back now pre-launch with the band getting up to all sorts of riffy-mischief since! Including supporting the legendary Dead Kennedys.*

In SickOnes style, lets start off frantically. Describe the band in the most ‘uncouth’ way you can without thinking about it too much, then ill ask you some actual questions…

The amalgamation of three hyped up Homo-Sapiens focusing a unified energy through the medium of music. Positive fucking Hardcore.

I’ll see that and raise you this question…

The pace at which SickOnes has expanded and progressed is objectively speaking a tad fast to say the least. How has that affected the inner-band politics and feeling towards each other and the craft?

Initially like most bands (I think) it was just meant to be fun, fast and loud. Nothing too serious.

But then things picked up rapidly. We had a few very good shows in Bristol (Venomfest 1 etc) which just fired us forward. A fairly healthy online presence and show offers across the country spurred us on. It HAS been at a breakneck speed but I think we’ve handled it well. We can’t thank the initial bands and promoters who took us under their wing enough.The joy of our current set up is that we can easily make decisions and make things happen. It doesn’t have to pass through a committee. I feel we have a good chemistry and humour between the three of us. We’re able to spend copious amounts of time in an enclosed space together without violence.

We now take the writing process a lot more seriously, which we relish in. We’re now far more comfortable introducing elements that we wouldn’t have even thought about before. The same for Ben, I think now his message is being heard he is truly enjoying the lyric writing process.

To be honest, that to me is very rare in that you have achieved what most bands either can’t or don’t for very long at least!

I can agree with you on Ben’s writing. Ben has never been a bad writer at all in fact but “Find Energy” and particularly ‘Bad Way’ are impeccably written, both objectively and subjectively to me at least. What other elements in your own words have you added and what do you have in the pipe-line? Will SickOnes always be a Hardcore Punk-Rock band or follow this newer Post-Hardcore you appear to be in bed with?

We have definitely been blessed with the opportunities we’ve had. I’m happy to say a fuck-load of hard work went in at our end but we wouldn’t have got to Europe or America with out someone
reaching out and guiding us!

I think ‘Bad Way’ was definitely a turning point for myself as well – when I came to write the initial skeleton I was really trying to focus on a stand-out track. Sort of like ‘I Don’t Exist”s older brother.
I now play around with lead lines a lot more, granted they are aren’t delicate or virtuosic but they add a new element and dynamic that we haven’t had before, which helps break songs up in an interesting way. That lead element infused with the groove we love so much really birthed ‘Bad Way’.

I think we’ll always call ourselves a Hardcore or more specifically Hardcore Punk (emphasis on the Punk roots) band yes, the thing is most modern Hardcore is very heavy, often mid to low tempo. We just decided to write things in a faster, weirder way with more reference to 80’s Hardcore as opposed to 90’s metallic styles.

I think the Post-Hardcore label is an interesting one… because for me (and you?) when you say Post-Hardcore you mean bands like Fugazi and older bands that began infusing melodic elements? But I think a lot of people would assume that label is more closely tied to bands like Refused or early 2000’s Emo-core style – Underoath, Thursday, Thrice etc – I could be wrong but I don’t think a band like Fugazi has much in common with what people now call Post-Hardcore.

I can see the relation with ‘I Don’t Exist’ and ‘Bad Way’.

I agree with your indirect point there, there is some confusion with that genre-tag indeed liable but for me, the early-end of the genre is something I’d say you touch on with your time signatures and newer warped melodic lines. Perhaps Progressive Hardcore could be your new moniker in the not too distant future!?!

Refused. What a band! Another you could lump in that genre pool quite easily although the latter Emo-core Post-Hardcore is not something I personally see in SickOnes, more the aforementioned Refused-esque progression as it still kept it’s Hardcore roots.

Do you see SickOnes following any more traditional Punk orientated Hardcore (musically) or perhaps a more metallic sound? Your answer will influence my next question.

I think we quite like the label Progressive Hardcore, though maybe it’s not progressive in the wider sense of the word but within in the genre? Maybe?

I think we want to keep our sound organic, by that I mean things like having a big “Albini” style drum sound, not going too heavy overproducing stuff.

It’s difficult to say but I think us always looking back to the 80’s pioneers helps us maintain a more organic tone which some people may consider “Punk” but realistically all it means
is we aren’t triggering the kick drum, we’re recording real amps and allowing certain human discrepancies to slide in the studio.

I hope we can find a blend between the Punk and metallic sound. Sometimes it feels as if we enjoy modern sounds and 80’s Hardcore in equal doses that we’ve some how landed in the
90’s…? Like Black Flag with some better production value? I don’t know!

The Black Flag-isms are certainly there and being stuck somewhere in the 90’s organically seems to be about right. For a Punk act as well, you dutifully do you homework well.

How do you find SickOnes compared to the band’s contemporaries and to extend that question, what do you find to be one of the better aspects of the current scene? Versus something you find wholly negative.

Oh for sure. We all have quite a broad taste in music. We’re definitely a pretty well read band musically speaking. Weird knowledge in all corners of obscure genres.

It’s difficult to say exactly how we stand against our contemporaries. We’re definitely weirder and I’d like to say no one else in the UK sounds quite like us. Live we seem to go down well in numerous settings, we’re not super heavy but still have elements that entice those who want a heavy set. Again, emphasis on groove helps give people something to latch onto.

The scene is very supportive – we were embraced by Bristol quite early on which was really the start of all things good for the band.

I think Punk has always had issues with machoism. In all of it’s sub genres. A competitive nature that just isn’t needed in a scene that’s meant to be an all-inclusive community.

It goes without saying how often you hear of or see evidence of SickOnes in the South west so you must be doing something right.

I admire how honest you are when you say how different you feel you are. It takes a lot of guts to be able to self-profess such a notion and to be fair, said statement does have some credit, especially as the collective of SickOnes seems to be ever-changing in a sort of compensation to its format.

I have to agree with you there. Sadly a lot of it seems to stem from the previous generation coming in to contact with the ever-widening greater movement.

For sure! I don’t say we are different in a pretentious or elitist way – we’re just doing something that isn’t common and always striving for some form of originality – which is more of a personal battle for the band.

Do you think that is the primary reasoning behind how you operate, being forced to continually react to your own reaction?

It again goes without saying how hard working the band is, in what ways have you seen that pay off and do you think you’ll be taking a rest anytime soon?

It’s a cliche but we enjoy writing music we like. Between the three of us we have found this frantic, groovy blend with a contentious message from Ben.

Running the band is definitely hard work but the pay offs are an amazing feeling. Just playing for twenty-five minutes can make the grind worth it. I feel the big pay off was the House Of Vans Show with Cancer Bats and Higher Power. It was this perfect coming together of hard work, the right people hearing our music and a shit load of emails. With regards to rest…? Who knows.

Charlie, I think that is a perfect place to end.

Thank you so much for your time.