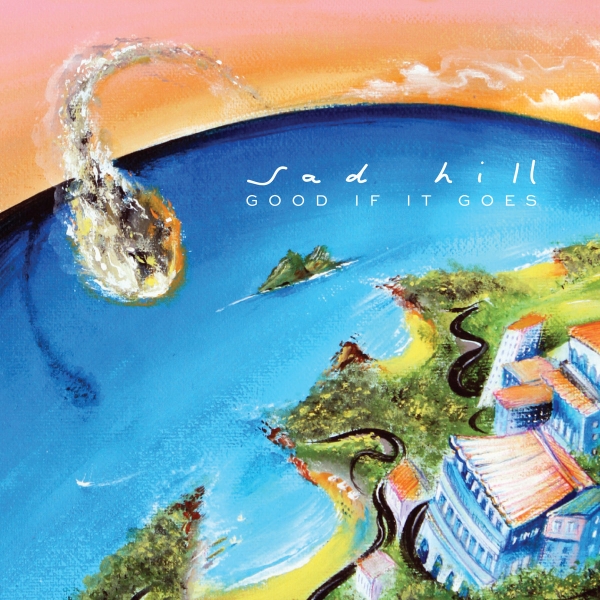 Much like Post-Hardcore, Alternative Rock being an offshoot or the greater Punk-Rock movement has become such a versatile canvas for bands from all walks of modern Rock. Some bands lean towards Punk, others Indie-Rock or Emo and some keep the grass-roots of the genre and then take it on all sorts of sonic adventures and that – that is a beautiful thing.

Sad Hill hail from Perth, a city of which at least from my experience reviewing music, has a strong and stable scene more robust that any contemporary (or specific) government. I’ll let that one sit there and you can fill up the Facebook comments when it clicks.

Sad Hill very much encapsulate the spirit of Alternative Rock. The three-piece are all scene veterans and within moments of the eerie soft Post-Hardcore Hot Water Music-esque layers of ‘Freaking Me Out’ you get a feel for the days of Sunny Day Real Estate and Jimmy Eat World making a name for themselves as you settle into the record.

‘Mantras For A Failed Academic’ is very much following this Hot Water Music/Jimmy Eat World vibe. This second track is driven but subdued in the verses with the subtle complexities of said verses contrasted in the comparatively huge chorus. Sad Hill are nothing but versatile at this point and the playful Indie-Rock intro of ‘New Warden’ is further proof of such before, yep you guessed, soaring Alt. Rock takes over.

‘Heat Wave’ is an excellent sing-a-long Rock-song with mainstream applicability off the charts and in tone  reminiscent of Fire In The Radio. Much like ‘Heat Wave’, ‘El Camino’ very much marks change of pace and approach for Good If It Goes. The band’s sound is nothing but emotive but with ‘El Camino’ you get a bit more of a feel for the band’s catharsis.

Sad Hill are very much showing you what 90’s/2000’s Emo should have been and you can hear enough of the forerunners such as Embrace and Rites Of Spring in their rendition that you can’t help but metaphorically pat them on the back. ‘Heart Attack’ is playful again but is so much more than it’s surface quirks, with the thick Punk-chugging and soaring but discordant ending solo standing as an absolute high-point as you realise how heavy the band really are.

This is an album that sonically pulls you in with it’s varied and multi-facetted attraction but keeps you with it’s portrayal of real life. ‘Chicago’ is a track specifically about wanting to be somewhere you’re not with a lesson and a logic eerily applicable to the everyday frustration of any given situation.

‘Hands Off My Head’ isn’t afraid to show it’s complexities in an intro easily applicable to contemporary Tech-Punk before falling into a more relaxed verse and then to a another huge but simplified chorus. Sad Hill take the Emo/Post-Hardcore crossover of the early 2000’s and early 2010’s and not only correct it’s mistakes but add a little contemporary mainstream Rock while they are at it.

‘Lucky Spirits’ is a Punk-Rock song plain and simple. The band really let loose here without compromising the sound thus far. This penultimate track is the best on this debut record and immensely well put-together.

‘Pat Wilson’s Ghost’ is the closer. Standing at a mammoth 6:06, it ties up an album so chocked full of emotion that you’re certainly taken aback but happily so. To reiterate my earlier statement, Sad Hill really do encapsulate Alternative Rock and have crafted a real modern classic with Good If It Goes.