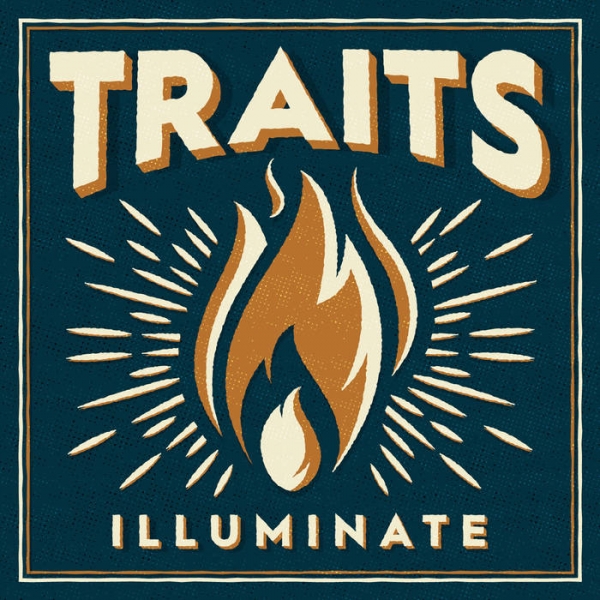 Traits, a band from Leeds with notable UK lineage (Random Hand, The Human Project). A band with the riffs of Pulley, Implants and the legacy of 90’s Skate Punk. A band with harmonics that easily rival the best of Bad Religion and NOFX alongside northern-English accents and an ethos effectively epitomising contemporary UK Punk-Rock.

The band’s first EP, Limits (2017), was not only fresh as dawn in regard how it sounded and its production but in the way boasted classic Pop-Punk influenced relatable Punk-Rock with soaring melodies and straight-to-point lyrical content directly matching and decipherable from the song titles. The five-track EP was a cathartic release of everyday thoughts and issues with the only negative remark/question on the whole thing being how would they indeed trump such a release. And no, I don’t mean build a wall and generally being (overtly more than) a little silly (to say the least).

Illuminate is that second release and it shines. Traits aren’t “save-the-world” Punks, some of us are, some of us know people thus and many of us champion them and in no way am I disrespecting such humans as they fight the good-fight but with Traits and the message of ‘Less Fortunate’, just do what you can. Find it in our massive Skate Punk playlist – Here.

After the low-ridden crunching Skate Punk of ‘Less Fortunate’ classic Punk riffs ride upbeat tones forward in ‘The Good, The Bad & The Down Right Ugly’. I can’t stress enough the band’s stripped back musical efficiency but one of biggest appeals about Traits are the words they sing and so fervently believe.

‘Paradigm’ is the feel-good community track with the serious message. If we can change the typical thought and general consensus in the realisation that superiority should be dispensed with the world would run a lot more smoothly and in the terms of the layman Traits are doing their bit.

‘Drop The Status Quo’ sees the band have some fun with a faster tempo and harmonics lent from NOFX alongside a classic break-down testament to the harder-end of the band’s roots. Which is precisely where we are left.

‘I’ve Made My Bed’ again rumbles along ridden-low on crunching riffs reminiscent of Pulley, Ten Foot Pole and all their ilk before the band’s knack for a soaring chorus to contrast their axe-work takes charge in this crowd pleaser.

I am a firm believer that the word “melodic” in the context of Punk-Rock and Hardcore really should not be as dirty a word as it is. Traits, with their constant contrast between short, fast & loud gritty riffs and their really-can’t-help-themselves soaring melodies are living proof of such.