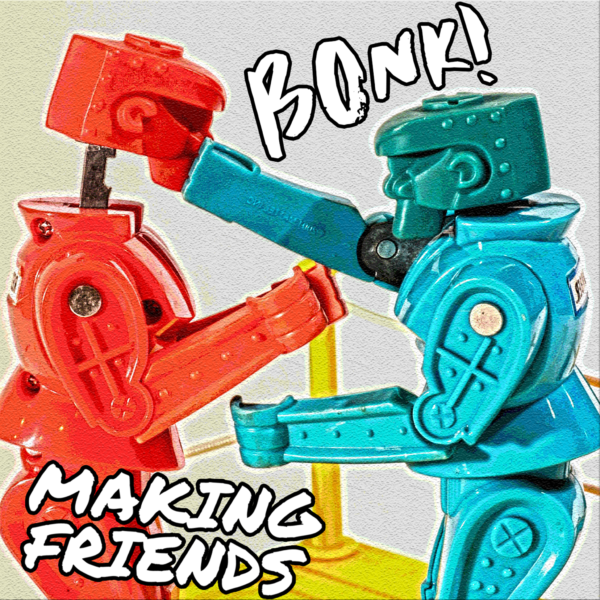 So here we are! Making Friends and BONK!, something that could easily pertain to a statement of intent as much as it could the continuation of this band’s story. However, as it’s before 9 pm (at the time of these typed-words) and there are little ears about perhaps the latter is best. For now. No really! This is a smut free zone. For now.

Now, digression swiftly aside, Making Friends and their debut BONK! are but a few days way. The Brighton four have technically released three precursor singles in their raucous and fledgeling state, ahead of the five-track EP shamelessly bare in its lockdown-project attire. Making Friends are no strangers to the DIY Punk scene and its methods. Although the band’s voracious drumming was recorded in a studio, the rest of the EP was split across varying parts of the band’s living arrangements. BONK! would then eventually end it’s a journey via the band’s compadres Sam Allen and his sonic mixology and the masterful mastering of Alesandro Cogolo, both from Cutting Ties. All things Cutting Ties will be left at the end!

For a full review and break down of both ‘BONK’ the singleton and ‘USELESS’ the reflective, you can mosey on over to – Here. However, in a motion to venerate the proverbial nutshell, I will say the following. ‘BONK’ is modest in its breakneck 0:29 seconds. The band’s vintage harmonies merge with their cathartic blast of sardonic Skate Punk, testament to and substantiated by its very method. The Brighton band capture the point where the genre was pushing towards its latter and more-so technically-minded self. Making Friends push an increasingly layered sound on ‘USELESS’, taking a comparatively more melodic approach with the timely deviations in tempo amplifying their gritty realisation and punch simultaneously.

‘WHAT HAPPENED TO MY ENTHUSIASM?’ was a further harmonic and further cathartic representation of the band’s internal lockdown monologue and debate with themselves. The track’s moniker does not only illicit seamless resonation before it begins but is in practice, completely lost within a face-wide frown. BONK! is a fun EP but is only so in response the existentialist pondering of these past twelve-plus months of “fuuuuckkkkkkkkkkkk”. Track three resembles and then super-charges vintage Lagwagon jump-starts with Making Friends’ vocally harmonic overlays yet again sardonically grinning at the unanswerable question. That and sonically, it’s just as tightly wound and impenetrable as the very rut it’s soundtracking. The more you listen, the exuberant blueprints of not just Lagwagon, but Adhesive and Cigar fill-up the legacy-meter.

‘WHAT HAPPENED TO MY ENTHUSIASM?’ and the following ‘SHORT STORY’ are very much the (lyrically ironic) highpoint and the main event of BONK! ‘SHORT STORY’ flirts with the other great sonic of the melodic Punk ’90s. Ska-Punk, I’m obviously not talking about ’90s boy bands. Although, the three aforementioned things danced interestingly close at times. Making Friends crash through ‘SHORT STORY’ in an honestly brilliant triumvirate. The band’s guitar-Ska and its correspondingly jabbing heavy-set Pop-Punk rhythms perfectly contrast the rounded blasts of intrinsic Skate Punk, themselves finished with a keen melodic edge. It is here that I’d be lying if I said that early Millencolin didn’t come to mind.

Making Friends are brash, obnoxious but honest. Despite all their bravado, BONK! showcases a clear skill and with such the band are at an exciting crossroads as their future work could see them carry on, hone or further explore.

No, I don’t. Well, yes I do but on something else. During the recording process of the EPs drums, MFs were able to record their forthcoming second EP set for a prospective summer release. Notably, said EP I’m told is full of ‘actual songs’, quantified as such by the simple fact they manage reach three-minutes in length. I’ll believe that when I see it.

But for now and I quote –  ‘BONK! is a compilation of all our short songs from the four months of being a band, we tried to make an EP that is unbelievably short, melodic, and stupidly fast.’ Making Friends and BONK! releases on the 19/02/21 everywhere.