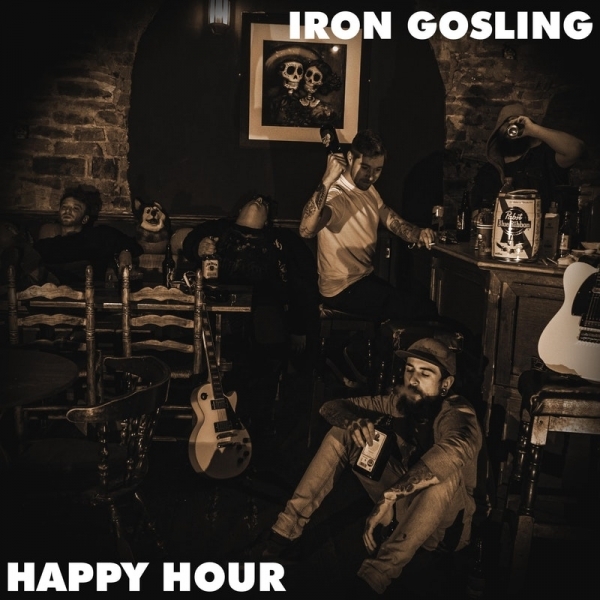 Self proclaiming themselves as “#drunkrock”, Iron Gosling are a band hailing from Swansea that are perhaps best described as unapologetic and proud of it. The five-piece released their debut eight-track album the (I bet you saw this coming) Happy Hour recently and to be blunt, a lot of fun.

Review over, let’s go home… after the following.

Typically, when it comes to a band either partially emulating, indulging-in or down-right embracing the world of Pop-Punk, you often find yourself sat there looking at two polarising categories. The overly stereotypical backwards hat wearing, barely-holding the microphone championing, nasal singing five-piece either directly stating or skirting around the idea of the hating of a population centre large enough to be considered a town; can indeed often be one. While the other is often simply a band again, unapologetically adhering to a beloved musical style that concerns the playing of Pop-songs to a classic Punk beat and structure.

As much as in all honesty both produce stellar bands dependant on objective taste and that I am admittedly taking the piss a little bit, the “#drunkrock” of Iron Gosling very handsomely sits in the latter. A point one hundred percent proven in ‘Bad Inside’.

‘Story Time’ is one for the Teenage Bottlerocket fans and that’s all I can really say, again, the band are quite literally playing Pop-songs to a Punk beat to have a little fun and perpetuate said fun outside of their own. In truth, I try to avoid the term “Ramonescore” but in many ways it is indeed fit for purpose in the description of Iron Gosling; especially in the additive ‘Jekyll and Hyde’.

‘Salchicha’ takes radio-friendly Punk to another vintage time where notes of Rancid‘s emulation of The Clash meets the Bouncing Souls. This midpoint is an opinion breaking track, in that it breaks up a sound risking itself as samey and repetitive but also interrupts the continuity of the release; personally I am at a loss in regard to its placement within the context of the album but on its lonesome, it’s a solid effort mate.

You know you have already arrived at or perhaps are very much close to the point where you’ve indulged in an overly gratuitous amount of Punk music, when your prediction that this classic Pop-Punk band were going to pass-off an old-school Hardcore track is correct. Iron Gosling very much pull this off in the same manner of the Descendents and it suits. That’s not to say I am comparing the band to said household names but rather suggesting that their influence is less direct and more of a reference guide for prospective listeners. That or perhaps that it’s a good song? I’m very tired.

‘Reckless’ is a return to form and perhaps the very top point and bench mark of said form. Rancid-esque tones are seen once again but this tine far more at home within the greater continuity of sound for the band. A point I keep making but a crucial aspect of this release.

‘Dead Girl’ is a love song with twist and quite surprisingly contains a micro-cover of ‘Stand By Me’ that could not position any better and brings into question whether it rivals the Pennywise cover or not. Decide on this you shall.

The opening slow and relatively cumbersome intro to the closing ‘Not My Cage’ edges the band towards both classic Punk and a generally – albeit slightly- but more than contrasting heavier sound and it in actuality signs-off a Pop-leaning album very all. If Iron Gosling had not made the slight shift towards additional Punk styles at the mid point of this debut it would simply play its final throes within “good” territory and that would indeed unequivocally be that. But it’s not that, it’s this and an excellent debut indeed.