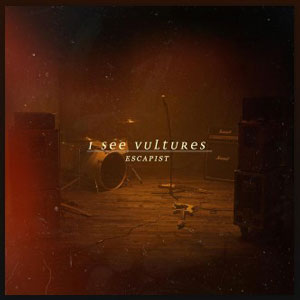 Introducing I See Vultures. Why now? Especially since the band’s debut single was released back in October? Well, firstly, the UK Punk and Hardcore scenes are in the midst of exponential growth. Which is important. Secondly, the band are on the very cusp of unveiling their follow up and secondly 2.0, chances are, you may have missed simply them. The internet is a gargantuan maze after all.

So, other than hailing from Leicester, who are I See Vultures? The easy answer is that they are a Hardcore band but vaguely stating such a complacent and arguably benign description would be an injustice.

Why? Because of the band’s variant of Hardcore Punk primarily straddles three prongs of the spectrum while also thinking elsewhere. ‘Escapist’ moves seamlessly and alternates between the three track-wide but still manages to achieve the prominent contrast each time, ultimately making the track what it is.

Opening with the melodic early 2000s and 2010s-esque lead line that goes on to permeate the track as a whole, I See Vultures sharpen and infuse prong one; emotive and cathartic Post-Hardcore. The intro teases a track majoritively inclined to such but that simply isn’t the case. Before you can think, vocals not quite fully on the modern Hardcore spectrum allow the instrumentation to break into a stripped-down, yet cohesive Melodic Hardcore charge into a verse infused with a noticeable drive of melodic Punk. The layers build as the excellent melodic guitar work begins to take-point more-so before breakdowns (and vocals) inclined towards more traditional Hardcore feel need to remind you of how diversly the band have researched post-soaring chorus.

Vocally, despite the punch-face approach, the band’s expert use of backing shouts, rather than the usual gang vocals is track-defining. In fact, as intrinsically fitting as the lead-vocals are, without this solid backing, the escapism of ‘Escapist’ would fall past the first prison gate.

The Hardcore triumvirate being used to annex your ear canal is far from focussed on visceral abrasion alone. The band’s melodic lacquer is utterly crucial and eventually envelops and takes full-hegemonic control. After more jagged Hardcore Punk juxtaposed with the repurposed rage of melodic Post-Hardcore, the 1:40 mark changes composition and pace entirely. The band take the time to extrapolate on the message they are trying to convey and the very dangerous terrain such a need to escape must navigate. Soaring, almost Emo-esque crooning vocals and intense latter-day Hardcore-styled spitting battle for vocal control in a move, not unusual but unexpected enough before a return to an intense closing full-speed.

I feel the need to comment on the tight-knit nature of I See Vultures. Although they aren’t laden with overt-Post-Hardcore stop-starts, the technical aspects of ‘Escapist’ are flawless. The band’s skin-beater shies away from straight Hardcore beats and puts in quite the performance. It also goes without saying, that the production on this debut single stands it in such excellent stead.

Introducing I See Vultures then. Got the gist? Good, that should tide you over for a while.