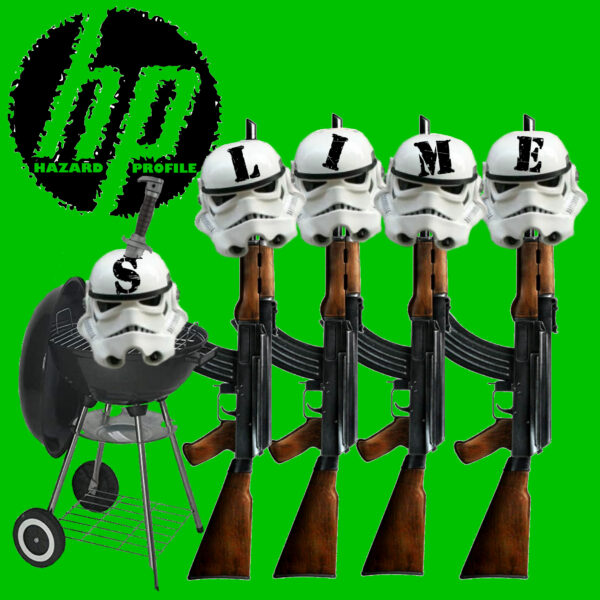 Hazard Profile and their debut Slime are yet another Hardcore Punk conglomerate conceived via societal contention deep within Kibou Towers. Now, we’ve been here before. Yet with each successive visit, the noise emanating from Kibou Towers is yet another twist on the versatile, unyielding charge that is the warped world of underground Hardcore Punk-Rock. Hazard Profile, as implied by the word conglomerate, have quite the lineage. Chaos UK, The Domestics, FUK, PI$$ER, The Wankys, Tokyo Lungs, Feral State, Toecutter HC, KÖRD VÄRLD, Kitty Shitter, Unicorn Fart Sugar, Bring The Drones are all names that makeup Hazard Profile. There are infact a couple more names to that list but I think you get the gist.

Hazard Profile and their debut Slime then?

‘No Vision’ manages despite its onset sentient level of unrefined dirge, to be quite charming. I appreciate that isn’t the word often used to describe underground Hardcore Punk but here we are. ‘No Vision’, before hurling off into a fantastically bare-all set of rhythms themselves as natural as word unprecedented (urgh) is now within common vernacular, twists warped ’77 Punk to its beat over a fantastic, tone-setting intro. The band of course seem to be perpetually rocking over the edge of breaking into something harder but their hybridised classic Punk and classic Hardcore alike is effortless.

Slime is not a happy EP and its surroundings and the people dwelling within them really aren’t helping. The eponymous track two whirls out of control in an alternating triumvirate of classic Punk-Rock, an inclination toward Powerviolence and of course a healthy dose of Kibou-core. It is no less than impressive that despite the majority of Kibou-born bands being united by the same vocalist and an interchanging cooperative of members, that each aggro 7″ shoots straight. Unlike those whose helmets now decorate the cover, that is.

‘(Pull It) Tighter’ although not surpassing a minute at 0:51 is the debut’s best. Track three is an internal and inescapable maelstrom of mental strife and its spasmodic soundtrack is the most fitting. Hazard Profile’s frenetic intrusions into Powerviolence’s realm are tight, wild and yet not as grounded or as low as you expect. The project itself occupies this very plain with clever, comfortable ease. Track three embodies the weightless separation of both early Hardcore and the Punk-Rock before it and applies them to the maximised rage that came later. The band alternate from this frenetic abandon unto stripped back groove-core and then onward to fast, classic Hardcore led by a fantastic whirling lead dangling in front. Will it lead the band away or result in the noose tightening? Who knows?

By now, you know that the relaxed ’77 Punk that begins ‘Retro-turd’ is but a placeholding edifice to what’s within. Hazard Profile’s five-piece status is somewhat unique within the recent noise unleash from Kibou and its compadres and it shows. This is a band the product of a wealth of influences but with enough common ground to make this triumvirate alternating Hardcore work seamlessly. ‘Retro-Turd’ is yet another example and another contender for the EPs most abrasive and indeed best. These are a collection of songs about people by people who don’t like other people. Dare I say that’s pretty Punk?

The band’s whirling, ripping leads are a key and notable aspect of the HP sound. Again, the dirgey-end of classic Hardcore and D-beat are of a lighter composition and yet are all the sharper and lacerating for it. It is these flashing leads that dangle in front of the Hazard Profile rhythm-section, leading them onward in a tantalising aggravated sway advertising the next set of undesirable human traits the band can’t wait to ferociously lambast. 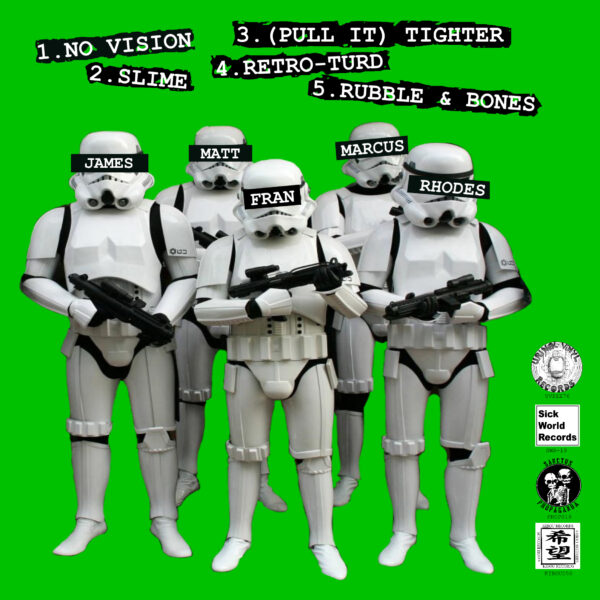 In all seriousness, bar its extreme-end-Hardcore-isms, ‘Rubble and Bones’ is pure-to-form catharsis. Hazard Profile have displayed their over-sized adrenal glands throughout Slime but with track fives no-hope nihilism, the band reach and then promptly obliterate their apex. ‘Rubble and Bones’ encapsulates a feeling almost too easy to resonate. Punk is often dismissed for its nihilism but nine times out of ten, I would hazard that to be a profiling mistake. Pun aside, if you were to capture the contemporary wave of disassociation and deflation, it would likely be listening to this song.

Considering the inextricable links between the bands of the Kibou roster, you’d think they would be running out of ideas! However, you’d be wrong. For now anyway!

Hazard Profile and their debut Slime release on the 23rd April via Kibou Records and Urinal Vinyl Records in the UK, Sanctus Propaganda in Poland and Sick World Records in New Zealand. Find all involved below.