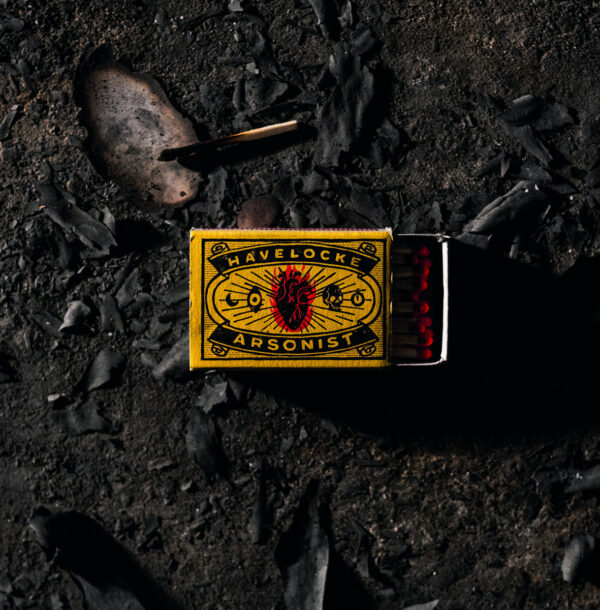 Havelocke and their Arsonist have a rich and fierce history of nightmares behind them and that is where they will stay, in the past. Now, in this here 2021, with one EP behind them while they sit on the precipice of the chasm their Skate Punk-infused Emo and Post-Hardcore sound has carved from the soundscape, the band manically smile, rocking back and forth.

Now, before I start, do not be put off by the word Emo. The genre has endured despite its early 2000’s “scene” connotations. It’s cliche aspects ofcourse have their place but the reason why it has endured and infused other branches of the greater Punk tree and its legacy is simple. When it’s done right, its bear-all nature substantiates itself as well as any other Punk-offshoot, no matter the distance from the aged bark.

It is bands such as the Sheffield based Havelocke and their soon-to-be EP, Arsonist, that are amidst this. Can the four-piece top 2019’s This Is Havelocke? Well, if the introductory ‘After Dark’ has anything to say, then the prospect is a possible one. Initially, Owen Cousins’ vocals instantly juxtapose his usual melodic-to-maniacal rage-filled repertoire. ‘After Dark’ then employs his more recognisable crooning tones soon after and ahead of his usual vocal barrage. All the while a sonic backdrop of heavy-set looming Post-Hardcore-isms and angular rhythms pound away. Track one is a statement of modern Emo-Rock potency. Havelocke are increasingly brooding and low-ridden. Their maturity is effortless and yet their moody yet clear exuberance shines (in black, obviously). The band’s lead axe is the tracks way-finder however, as it meanders in show-stealing fashion.

Havelocke may own their higher octane Punk and the overtly charged Post-Hardcore reaches of their haunted-cellar-dwelling sound, but ‘After Dark’ is a real highlight of their work to date. ‘Vampire Eyes’ then pushes on after a seamless and immolating segue. Track two was Havelocke’s first from Arsonist and it is still obvious why even after two later singles. ‘Vampire Eyes’ is a jagged Skate Punk-leaning escapism that has been pushed through an Emo-sieve itself partially comprised of post-Pop-Punk melodies and Emo-Post-Hardcore layering. Track two is the showcase to a prospective fan.

Though Pop-Punk isn’t overtly a part of the Havelocke sound, its legacy can still be felt. ‘The Arsonist’ although conditioned with Post-Hardcore stop-starts and jagged cathartic breakdowns, is a clear example. Havelocke’s near-constant changes in tempo, dynamic and even style prevent complacency to the highest degree and yet maintain an excellent continuity. ‘The Arsonist’ is intense and indicative of a wonderfully comfortable band as it cascades through every discernable aspect of the tightly knit hybridised-Havelocke sound.

The band’s harmonic approach pervades ‘The Arsonist’ and seamlessly permeates the following ‘100 Seconds’. Though Havelocke have never necessarily released anything sub-parr, this second EP is a considerable improvement. The band match aggression to harmonies and melodies that would take the edge off if it wasn’t for a middling and separating intensity that feeds the natural contrast.

‘100 Seconds’ is another that cannot sit still. The Post-Hardcore-wing of the band’s sound has always been obvious. However, now, with their excellent rhythm section earnestly chasing Hope Thackray’s fantastic displays as they bounce their own anthemic emotion off Cousins croon-to-vitriol and repeat, the band are quite the spasmodic force. ‘100 Seconds’ is another where the band’s cross-reference of appeal transcends any individual pigeon hole. The cathartic blast of Skate Punk between 2:35 and 2:41, although short, is the perfect courage and realisation as hands embrace for the end.

‘When We Go’ is obsessed with hindsight and stuck in a perpetual lamentation of the past. The final blast of Havelocke’s latest is considerably more rounded and straight-running compared to its predecessor in its first half at least. The band’s serrated edges are tempered but not gone and the constant segue of the lead vocals from clean to strained is as seamless as the gliding backing vocals. That is until ‘When We Go’ ebbs into a brief and sombre reflective refrain. However, as this is Havelocke and their evocative catharsis is very much that, their heavy-set ways return to play you out, flanked by the pervasive way-finding melodic lead once more.

Havelocke’s Arsonist alter-ego bears its emotionally catalytic self on the 13th April via Silent Cult and can be pre-ordered below. Be there, for, in short, it’s a masterful display of cleverly hybridised Emo-Punk-Rock.