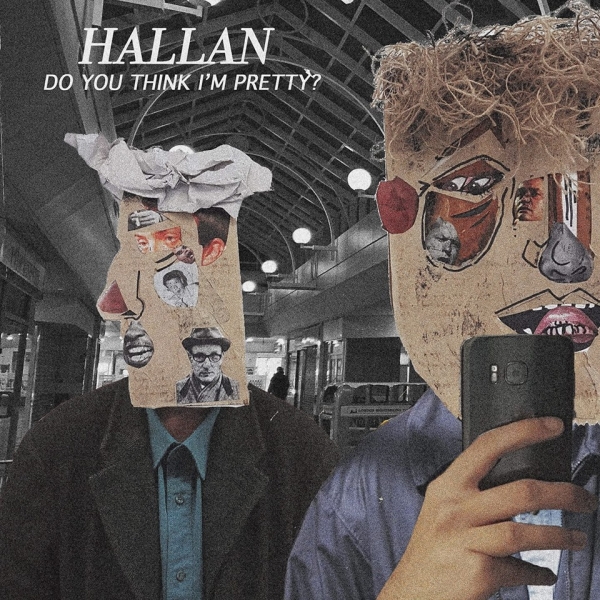 If you mosey on over – Here – you’ll find piece via Ear Nutrition on Hallan. A band categorising themselves as Post-Punk, Indie and Alternative. The Portsmouth four-piece in many ways quite obviously come under said descriptions but then again to quote the band – they are ‘forever mutating’.

Mutating indeed and with their latest two singles, the aptly titled ‘Mutations Occur’ and ‘Do You Think Im Pretty?’, said mutation very much shows a band with not just musicianship and skill but with a sound well researched, spreading their Alternative wings towards Punk, further into Alt. Rock and well into Post-Hardcore. You can find both in one of our playlists – Here – but it is ‘Do You Think I’m Pretty?’ we are all about today.

‘Do You Think I’m Pretty?’ opens with riffs not really that affiliated with Post-Punk at all, rather more in-line with early Post-Hardcore and the early energy of Rites Of Spring and Fugazi before modernising a little into what Punk-Rock often became after said Post-Hardcore fruition. This is far more of a Punk-Rock song than I will admit I was prepared for and at it’s mid and mid-to-fast pace, it’s infectious.

The band’s intelligent song writing is very much out in force and again, rife with Punk attitude and temperament as it plainly through sardonic humour aims at not only our infatuation and love-affair with mobile devices but also our other love-affair with our constant same-feeling towards love and the world of online dating.

‘Do You Think I’m Pretty?’ is in truth pretty harrowing stuff I feel I have to say and the nail has been hit on the head with a precision strike. Back to the music though. The band’s production has always been difficult to criticise and contest which is something unambiguous when talking of Hallan’s strengths; especially when you consider their nigh-on by-song stylistic changes.

Hallan, a band with an unnatural number of fingers in a great many pies themselves mutating to compensate. Sonically pretty and I like it a lot.