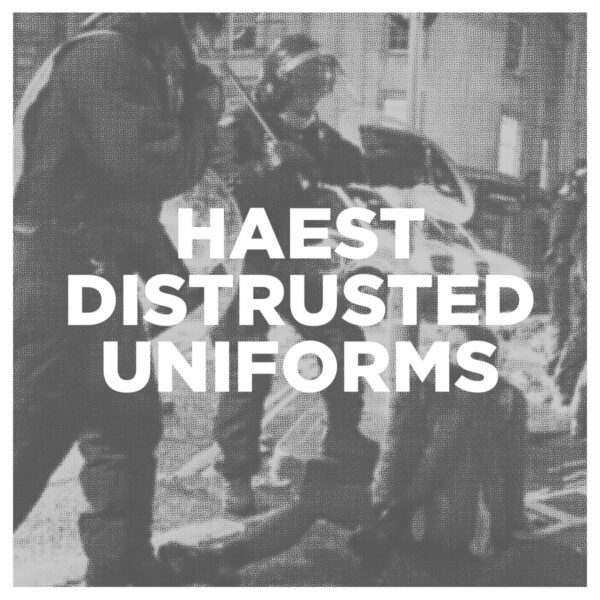 Earlier this year, Haest and Distrusted Uniforms appeared. The former being attributed but not limited to its status as a lumbering leviathan of loquacious Punk ethics. One that presents as a heavy-set, brooding mass of Doom aesthetic, Noise Rock and Post-Hardcore. It is safe to say that the Hastings (Haestings?) band certifiably twist their lineage from the Hardcore side of Punk but that is but an introduction. The latter, Distrusted Uniforms, is an EP played to the backdrop of a rapidly destabilising society where there is now no separate forefront. Society itself is now the forefront of its own entrenched systemic issues. There is no veil anymore. Haest and Distrusted Uniforms have a purpose so I’m not going to cheapen its mantra by reiterating it myself, rather I’m going to take it straight from the leviathan’s mouth:

We are living through a time of extremes. A time in which the true criminals are those who hold all the power.

These songs were written just before George Floyd was brutally murdered by the police. They were intended as a personal and philosophical discussion about the policing of outdated societal expectations placed upon us all through race, class, gender and lifestyle.

But, whilst we were recording, (and with the black lives matter protests still ringing in our ears), it increasingly became clear that there is no time for the personal or the philosophical when murderers in blue are walking free on our streets. Sometimes there is only time to say fuck the cops, fuck the patriarchy and fuck the capitalist system that empowers them both.

Please know; we are only allies. If you’re hearing this message without listening to black voices, to women’s voices, to trans voices or to queer voices then use this as a platform to find them and actively listen to their words and their songs. Haest cannot convey the truth from a place of privilege, we can only try to spread the message and support those who are truly affected.

With that in mind, all proceeds from the sale of this EP will go to Sisters Uncut.

Need I say more? Links to Sisters Uncut will be left at the end, but for now, what of this new self-released EP from Haest? Sonically, the band’s heavy-set, doomed-Doom tone is not one to hide. That said, within moments of track one, the band’s eerie nature is comparatively rounded and melodious.

‘Morrissey Makes Me Want To Eat Meat’ maintains the Haest part blog post, part riddle-like MO for titling their songs but it is within where the humourless reality resides and feeds its own disdain. Haest move to a slow ebb, determined but brooding and resigned to the bleak time they exist within. A meandering lead lights the way as the incredulity of reality, hubris and the seemingly impenetrable armour of ignorance reigns. Track one is but an introduction but a powerful mood and tone-setter nonetheless. Punk isn’t always breakneck.

‘How Many Plums Is Normal For A Mouth?’ conjures an image that has quite the sardonic origin despite an obvious air of socio-political dread. ‘This loss of humanity has been documented, hateful words whispered through sunglasses […]’ is the line that greets you and its emphatic disdain is shameless. Haest are cathartically lambasting the fall of our “great” Britain and beyond in an extrospective rant that without a doubt has caused cognitive and introspective harm.

Musically, two returns to the Haest we know quite importantly via track one’s meandering progression. Vocally, the strained and urgent legacy-Punk vitriol is as before. Crucially though, it is now in contrast to what came before it on Distrusted Uniforms and stands more defiantly in its Noise-Post-Hardcore catharsis. The unloving lumbering leviathan moves in a perpetual cycle of power ala the band’s full-length.

However, Haest 2021 coat it all in a melodic but no less than unsettling lacquer. The band don’t necessarily lose their doom-trodden foundation but keep it in sight. Haest keep one eye affixed to it as they up their increasingly layered and complex ante. It is true that they are not your typical Punk band stylistically. However, those archetypical stylistics are still an intrinsic part of their tirade. At the 1:59 mark, their Hardcore resurfaces more evidently. Thick, angular, stripped back but impeccably well-timed riffs take charge chased by earnest, fucked-off drumming. This final foray is immensely satisfying as its contrast to the previous more melodic Haest adds weight to the statement that ‘How Many Plums Is Normal For A Mouth?’ is one of the band’s best to date.

Haest close with ‘What’s This Song’?. Track three clocks a modest 0:21 packed with a simple message that I will leave to you to uncover.

Those were my thoughts on Haest and Distrusted Uniforms. I may well be late to the party but music has a ubiquitous nature. So, equally, as this EPs cause is one that is just as paramount and omnipresent, here it is anyway. All proceeds from this release are being donated to Sisters Uncut. We can all be better, find out more below.