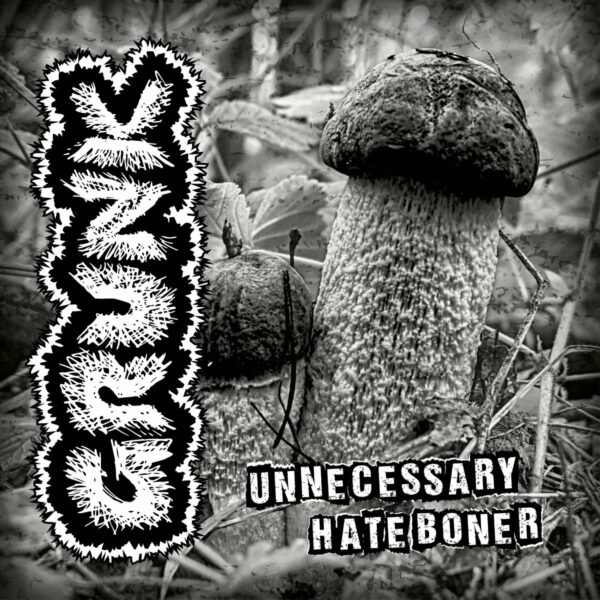 “GRUNK and Unnecessary Hate Boner” is a series of words that I hadn’t expected to utter yet alone write down so others can. However, for whatever reason, I am attracted to both dirge and humorously monikered bands and music so here we are. GRUNK hail from Rubgy and that very locale’s own moniker is one conjuring images of a hulking masses of bodies. GRUNK very much maintain this likeness but do so beyond their three-human stature. GRUNK do so but concentrated around their amalgamative maniacal blast of heavy music based around the seminal foundation of Hardcore Punk.

Unnecessary Hate Boner is a child born from the pissed-off procession of the aforementioned Hardcore. Include a-lone Metal-obsessed axe and all the Crust Punk and Grindcore involved therein and that is where GRUNK reside. In short, the band are relentless in their cacophonic abrasion and this is the first time I have really touched upon such in a”review” setting. Shall we?

Firstly, the word unrestrained is often thrown around to describe the meeting point of extreme Hardcore and Metal. ‘McGoohan’ is very much this. GRUNK opt for rawness-over-polish as per you’d expect and their lone metallic Hardcore guitar over forward-facing drummed tenacity is the very antithesis of the tracks befallen, disaffected nature. Importantly, track one also marginally refines the inherent chuggathon and visceral guitar-noise with a contrasting melodic drive as a sign of potential differentiation to come.

Despite its minute contrast to itself, track one was very much the abrasive mission statement. The 0:58 of ‘Devour The Will’ follows on from the more refined drive into a more recognisable Hardcore Punk without losing the blunt force trauma and overhauled Metal-isms. ‘Nothing’ flows brilliantly into its somewhat creepy first verse before the greater context and tale of woe is realised. Stylistically speaking, GRUNK then fall into riff-heavy and slow-lumbering Hardcore and together with ‘Devour The Will’, mark a highpoint on Unnecessary Hate Boner. Pun very much intended.

‘Hooligans Haircut’ cathartically expresses its confusion and anger at how to feel as a product of a gaslighting society in a robust 0:37 blast of Grindcore. Track five on the other hand further deviates and showcases the band’s influences. ‘Leeches’ retains the metallic bite inherent to GRUNK in the reverberating verses ahead of an eerie Crust Punk chorus in brilliant contrast to Oliver Pawsey’s most reserved vocal yet. ‘Central Union Necrotic Thrashers’ is a pure to form blend of everything preceding it and marks an even harder highpoint. Micheal Rogers injects his contrasting and eerily whirling Crust-melody and Paul Revels energy behind the kit is nothing short of impressive. It clear here that GRUNK are determined to show that this vein of extreme Punk isn’t simply just noise and that vocally, it doesn’t have to be indecipherable.

GRUNK neither moniker nor resign themselves to the Grind(core) but it is a bonafide aspect of the three-piece. ‘The Glimmer’ with its filthily-hellish riffage and interchangeable machine-gun to cycling drumming hurtles the band in this direction, while ‘The Horrible One’ lambasts evil to this very unrestrained (see, there it is!) medium.

‘The Temple Of The Giant Milapede’ would be the track I would show to those who came here for the very Grind. Although I cannot speak for the band’s inspiration for track nine, its veracity is impressive. GRUNK are resoundingly at their best when exploring their Crust, Hardcore and Grind in an amalgamative fashion but when they a majority in favour of their Grindcore, they are hard to knock.

Unnecessary Hate Boner is a record rife with relentless drive. In its purest form, it lays GRUNK bare but it is also important to say that the release is as spirited as it is exhausting. This is evident in the slow almost Sludge-like approach to the closing ‘Mushroom Glowing Hermit Of The Carpathians’. Track ten is another with a fantastically ambiguous origin and yet presents one of the few criticisms of GRUNK’s debut. The closer is critically apart of the variety of this release. That much is clearly evident and hard to debate. However, its placement on Unnecessary Hate Boner would be arguably better suited in reverse with track nine. That said, I can’t stress enough about how this is the only real and tangible criticism throughout.

The three-piece have very much put themselves forth as they please.

GRUNK and Unnecessary Hate Boner. Find it below.