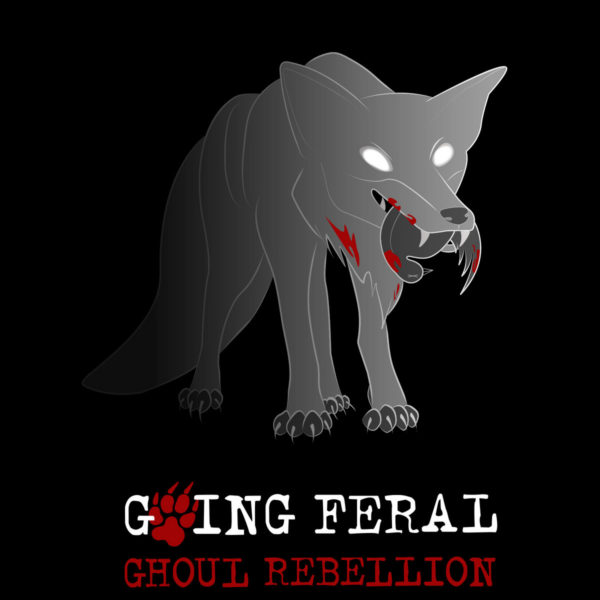 Conjuring images of Tenpenny Tower and Underworld alike. The great catch-up 2020 continues with Going Feral and their debut, ‘Ghoul Rebellion’. Now that the references that I hope some you recognised as are aside, we can progressively reverberate, gyrate and follow on exploratively. Please be mindful of your Geiger Counters though, smooth-skins.

In the interest of wasting no more of your time than is absolutely necessary, it is fair to say that Going Feral standout. This isn’t just and simply because of their chosen wing of explorative Rock but rather their format within it. Going Feral, in a manner notably intrinsic and idiosyncratic to their ensemble, employ two-guitars, no bass and no vocals.

The latter part isn’t particularly unremarkable now, but the former unquestionably is. The band market themselves as a three-fold blend of Post-Rock, Post-Metal and Prog-Rock and although they fall generally under the latter, their variation of the foreboding middle stands prominently. The band’s debut single is rife with this inherent foreboding doom. Going Feral are tuned low with anything remotely resembling melodic fighting for prominence spasmodically.

As the reverberating, glass-cutting Post-Metal groove builds, the band’s Post-Rock, in the form of comparatively contrasting leads, breaks loose. The band dramatically then fall back on their light melodic lacquer with, short, sharp refrains of thicker strings before another glossed approach dominates. Now, I say “glossed” but it is only allowed by the gloomed and down-trodden self-perpetuating rage that is the band’s rhythmic layer. The Leeds three-piece furthers this as the tenuous fence keeping this rage coraled allows increasing amounts to seep through via determined chord progressions. Going Feral subside at 3:10 and unleash an air of uncertainty.

You’d be deemed reasonable to expect a cathartic, archetypal Post-Metal breakdown, but you’d be wrong. Initially, Going Feral extrapolate on the playful-bouncing rhythm that populated the early part of the track as it suddenly makes sense. The band’s Post-Rock self-label between 3:10 and 4:26 sees its chance but only via the aforementioned playfulness so often synonymous with Progressive Rock. However, post-4:26, the band brilliantly allow this tone to symbiotically lead thick, dangerous Post-Metal to the straddling point of its Post-Rock contemporary. Going Feral are definitively terrifying. Their doomed, deafening sound is thick with such enveloping, viscous dirge that leaves me only hoping its all intentional rather that too much of a byproduct of the recording process.

Each time Going Feral pushes their demonic raucousness to its hardest Post-Metal extreme, skillfully, they employ captivating melodies that beckon you back and forth into this post-apocalyptic breach. Finally, what makes this track even more powerfully notable, is its status as the only mainline release. Going Feral have pushed an indomitable, commanding Metal sound and yet, what of the other two? Will they have their own chance to lead? I can only but reasonably hope and assume.

KOLLAPS\E and ‘- The Pandemic Sessions -‘