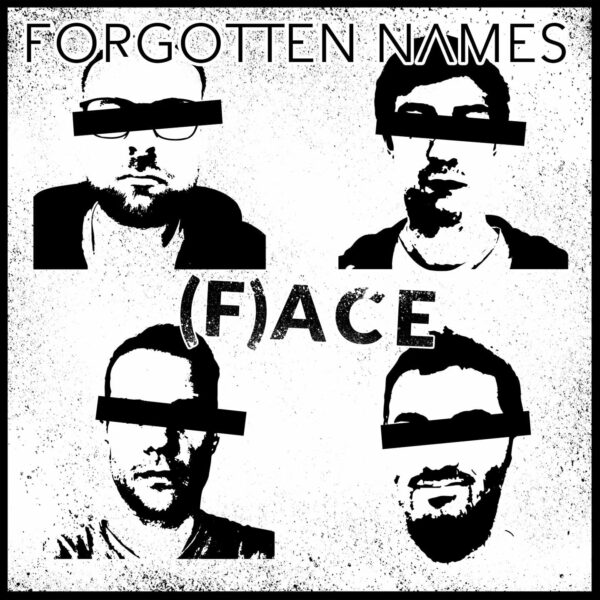 “Forgotten Names and Their Debut Single” is a headline itself the product of yet another arduous lockdown project. I shouldn’t need to extrapolate on that for more than a few token words. That said, as many of you in bands or in the know will completely get, the processes of releasing music this year have been trying and near-entirely dependent on geographical location.

But enough of that. Forgotten Names are comprised of one Iain Russell on bass and vocals and one John Allen on rhythm guitar. Jacopo Genovese then leads with own his strings and Alessandro Mercadante follows with a choppy, early ’90s Punk beat. That, if it wasn’t obvious, is the legacy of which has led to the 1:45 of ‘F(ace’). For a contingent of bonus context, here are some bands and names associated with the London four-piece that you may know:

Given the sonic equivalent of metamorphosis that the melodic blueprint of ’90s Punk has been through, now thirty years later, you never truly know what the adjective of “melodic Punk-Rock” will yield. This could be any number of Post-Hardcore infused technical theatrics or furious Thrash-riffed assaults, secretly pleasing the traditional Metalhead that REALLY doesn’t want to admit it. It could indeed yield any of those. However, sometimes, it’s all the simpler. Enter ‘F(ace)’.

As a disclaimer, this isn’t going to be anything new but when did that matter in Skate and melodic Punk? In a song played by many bands since it was first written in 2007, Forgotten Names blast through a lot of the cutting riffs to soaring melodies that were set down by the likes of Bad Religion and Pennywise. The band edge-in on these lower-driven and simply cut Punk-Rock stylistics themselves so owed to the late ’70s but beefed up ala early Cali-Punk. The post-Suffer world of harmonic Punk tempers this punch. From the archetypical rumbling bassline to the cutting rhythm axe, the band push on that ubiquitous melodic lining destined to dampen the blade but not the force behind it. Forgotten Names introduce the similarly ubiquitous OG-Punkisms to the soaring world of the chorus and achieve “full-90s”.

On the back of these seminal odes and blueprint emulations of Bad Religion and Pennywise, Forgotten Names approach further seminals built off the same. Seminalception? The four-piece’s cutting jabs remind you of Punks jagged and ancient blueprint. In contrast to this the playful melodies of the genre pair with the tale on offer. ‘F(ace)’ concerns the joy of outwitting an opponent and reading every aspect of their conduct. This victorious one-up of the enemy is excellently purveyed in a chorus itself not too far from the rough-cut-to-soaring formula of Face To Face or Pulley. However, don’t let this dominant melody fool you. As with the opening line, even this playful nature can be juxtaposed. Jacaposed, perhaps? Moving on!

Through ‘F(ace)’ the mood determining lead dangles in front of the determined rhythms behind it, surrounded by genre-defining harmonies. Despite the vintage singalong chorus, the band’s lead reminds you this is still cutting and classic Punk-Rock. This particularly comes to a head with the Penny-Religion hybrid refrain between 0:51 and 0:57 but most notably between 1:20 and the tracks abrupt end. Forgotten Names, as cliché as it drops in, do indeed have more in the pipeline and ‘F(ace)’ lays down hints for what’s to follow. This crucial contrast between the infectious chorus and the cutting, punching riffs and refrains present exciting possibilities of both classic-leaning Pop-Punk and harder pushes into a comparatively more raw Skate Punk sound.

Forgotten Names and their debut single may not be anything groundbreaking. But! Again, who really cares? ‘F(ace)’ is a tribute and testament to why the approachability and parallel punch of ’90s Punk has endured this long.