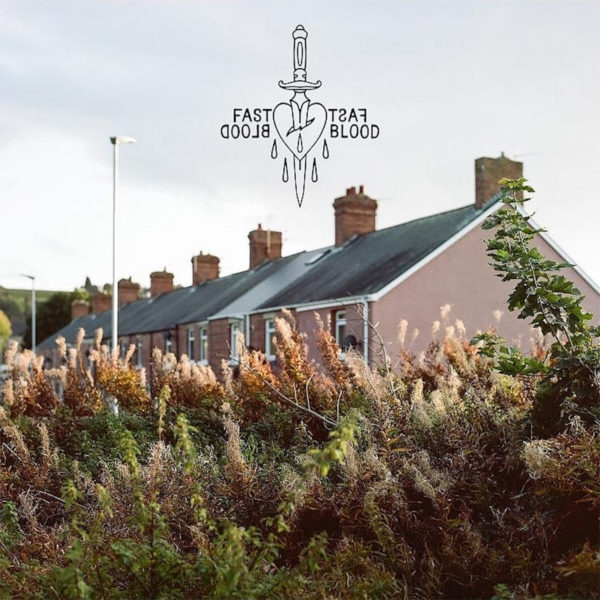 Earlier this year, Fast Blood and their self-titled EP entered the emotive Punk-Rock arena in response to onset societal gloom. It’s a tough job, but someone, or rather some people have to do it. Fast Blood are still fresh on the scene and their debut EP packs more of a punch than its numerically small number of offerings would suggest it too.

I implore you to head to their Facebook page and read their listed influences before reading and listening on. The band credit a wide and diverse array of seminal acts and doing so will allow you to immerse yourself further.

Alas, back to the main event, Fast Blood and their self-titled EP. Onward to Newcastle.

‘Rut’ will likely feel as if it has been extracted directly from your cranium via a little Orwellian filtering. Fast Blood are amalgamative in their Punk-Rock. ‘Rut’ is conditioned with the OG Post-Hardcore of Rites Of Spring and the mid-career excellence of Hot Water Music. The band thread lines of emotive, anthemic guitar tones that soar-over determined and slow ridden rhythms that are the exact tonal contrast. – ‘Every day feels the same to me, how am I supposed to know what’s real?‘.  Find ‘Rut’ in the EN PunkDayEvery playlist – Here.

Fast Blood aren’t a Post-Hardcore band and similarly aren’t an Alternative Rock band either but their brand of melodic Punk is comfortably supplemented with both. ‘You’ is a crunching and precise move towards upbeat climes. The track is infectious and instantly memorable with its controlled Pop-sensibilities and is perfect for those whose taste in Punk doesn’t negate their penchant for a good sing-a-long. However, what I feel really stands the track out, is despite said sing-a-long tendencies and gloss, the band don’t lose their intensity for a second.

‘Love Lost’ is more of this heart-on-sleeve Punk that band execute so well. Fast Blood write anthems pertaining to social interactions and the perils of which many face within them. Toxicity is a sad factor of such and one that the band have no time for.

Fast Blood envelop you with their melodic approach but insistently remind you of the harder-wing of their sound. Stop-starts, harder bridges and rumbling archetypal Punk bass-lines own ‘You’ and ‘Love Loss’ and I can’t help but praise these crucial contrasts. If this is indeed your jam, I suggest you look into a band by the name of Fire In The Radio – Here.

The closing finality of ‘Milo’ sees the band take a full-circle swing towards the rougher-cut sound of ‘Rut’.  It closes an EP true to its own introspective self and the self-owning cliche of heart-bleeding musical emotion. Fast Blood allow you to completely get on their level, which again sounds a little cliche but I’m my own boss and that’s what I think. Alternatively, you could say that the band allow you to connect with them wholly but I’m just propagating some of sort of cliche mitosis at this point.

Back to ‘Milo’. Fast Blood relents vocally from 1:23 to 1:55 before another cathartic release. This is noticeably excellent throughout the debut and is only aided by and draws attention to the excellent crisp production. ‘Milo’ is a cutting post-Post-Hardcore, Post-Emo (citation needed) Punk song and closes a debut nothing short of excellent.

Fast Blood and their Self-Titled EP is a clear contender for those end of year lists.

CABRO and The ‘HUMANO IGNORANTE’ EP