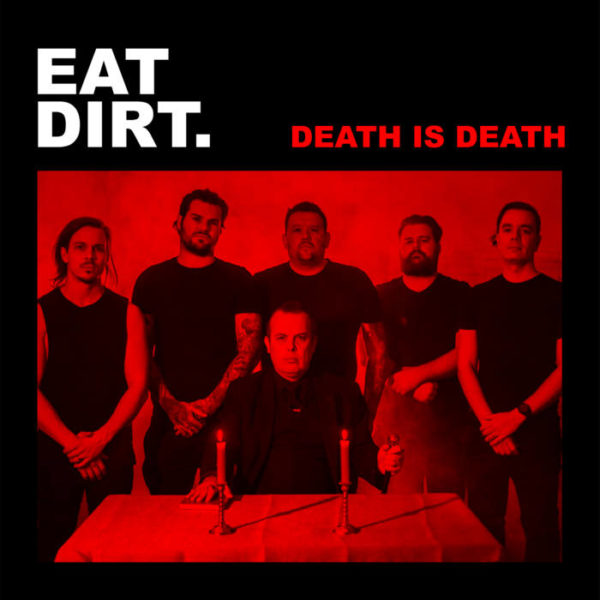 If you mosey either that little cursor or scrolly-scrolly-thumb-thumb of yours over – Here – then you will find a review I wrote for Musically Fresh on the second EP by a Hardcore Punk-Rock band by the name of EAT DIRT. It’s a rather raucous adrenalised four-track charge of disaffected, disgusted yet sardonically and sarcastically brilliant underground Punk-Rock and was an excellent successor to their first eponymous release, that was itself much of the unequivocally excellent same.

Anyway, I’d been waiting a long time for a follow up to Welcome To Shithouse-On-Sea and while I was using my own scrolly-thumby-boii to peruse those often boring media socials yesterday, while I was also pondering the fact that on that very day I was turning two-years closer to thirty, I then saw that ‘Death Is Death’ had audibly materialised within the soundscape.

Three-pronged Hardcore? Perhaps? What do I mean? Well! The band choose not breakneck pace to open this pit up, rather, a slower and incredibly cumbersome Refused-esque tone that constitutes the first prong. The second prong being born from the first as said tone presents itself via late 80’s East Coast Hardcore that is far more effective and clever than is initially obvious, in that Refused themselves drew a lot from this era.

EAT DIRT choose a far more traditional, scrappy and youthfully exuberant early form of Hardcore ala Black Flag and a general grounded British twist for the main verse. This being fitting and well-orchestrated in a track dark in inspiration yet also carrying that ED witty aesthetic just enough for it to be noticed. Find it – Here on our ‘New Old Core’ playlist on Spotify alongside some other EAT DIRT numbers.

‘Death Is Death’ is an excellent late 80’s Hardcore hybrid indicative of a time where all those important Post-Hardcore feelers were beginning to infect Punk music as a whole rather than just doing their own thing. Death is death, that is very much it unless you are speaking in reference to the fact that this track is simply a single, because it isn’t, rather the eponymous rage-incarnate trailblazer for Death Is Death which is to be released on the 3rd June 2019 via Bearded Punk Records.