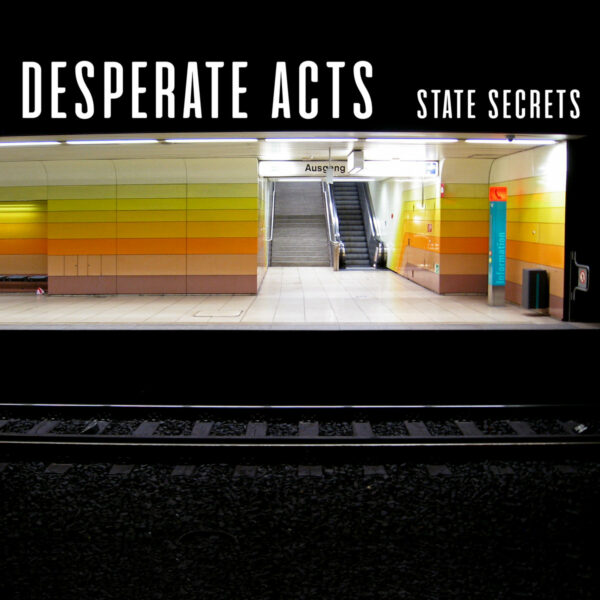 Ah, yes. The world of emotionally drenched gruff and melodic Punk-Rock. Desperate Acts and State Secrets as of a few short days ago, stumbled (in a possibly inebriated state) into this fray with their debut full-length sustained by its own emotional mass. The band, in a nutshell, hail from the place that spawned the emotionally resonant double-shot emotional spirit that was Banner Pilot. That place being Minneapolis but who are they comprised of? Well, the three-piece are yet another in the SBÄM shield wall and via their own utterance are ‘some ex-members of bands that have no reference point to this band. And that’s how we like it.’

Desperate Acts and State Secrets, shall we? I could easily give you THAT list pertaining to whom I would compare the band to but you will likely know exactly who, so I won’t. I’m just going to sit here burning tapes to the heat of the hot water my lawrence arms are in as I rest easy with my good friend. Any ideas? Nothington, mate. ‘Drying Out’ opens sombre, yet determined and self-evaluating in a personal hell. Driving yet melodic, track one is aggressive, gruff and powerful but also playful in its own way. The band’s melodic lead lights the way and permeates ‘Drying Out’ with its anthemic tone, promptly ensnaring you into the State Secrets trap with ease.

‘Jeff Crisp’ embodies that post-Pop-Punk, Post-Emo guitar-pop-intro that has itself ensnared many for decades. The meandering lead guitar and its beckoning tone epitomise how the legacy of Pop-Punk can be applied to more “mature” Punk music and it’s hard to argue to the contrary. Classic Jeff. ‘Brian’ then reasserts the subtle cycling power of track one before falling into further self-reflection and longing. Desperate Acts pertain to their name both wistfully and wishfully to a plodding pace between bouts of genre-standard chugging and gruff-to-melodic contrast.

‘Humble Lights’ cuts the pace to the slower tempo you expected and the band’s lead is on its best and most timely performance. The drumming is the dependable rock and bedraggled bass-tone forever hints a harder tonal shift. Track four, in a crowd-sung nutshell, is very much “that” song on the album. ‘I Am Trying To Impress You’ does very much that within a tonal shift towards an explosive Alternative Rock and Post-Hardcore injection pointless to criticise. Desperate Acts and State Secrets take a turn at this stage and the intensity follows on in a nuanced version of the records earlier parts in the standout ‘East Hill’.

‘Paid In Full’ makes use of this charge and amplification of DA’s cathartic power. The sudden, harder Alternative Rock and rumbling gruff-Post-Hardcore stylistics and their token but not unwelcome complexities are perfectly merged with everything the band did in the albums earlier efforts. The eponymous track follows with the DA-brand, moody, reflective and seamless amble. By the time of ‘State Secrets’, the album as a whole is both completely settled and comfortable. This is so much so that from everything from genre to production, despite State Secrets not necessarily being anything new, there is little to consider criticising.

Sometimes an album just “works”. There is no eloquent way to say it other than that and as the words ‘all good things fall apart’ fade into nothing, the lyricisms that have been beyond heartfelt throughout, fall into the sound waves of ‘FM’. Both ‘FM’ and the closing ‘Veil’ push this slower, thick yet chugging ease the band are adept at. There is an omnipresent intensity to Desperate Acts and it’s with you until the very end. ‘Veil’ conjures poignant imagery to say the least, and in its final act as it were, perfects an almost Fugazi-ish refrain prior to its final line and a sombre yet pounding Alternative Rock release that fades into the ether.

State Secrets breathes professionalism. We probably know the bands they’ve been in but it really matters not. Why? Well, because you’ll play this album over and over. Moreover and therein, do they fill the hole Banner Pilot left? Perhaps and by that I mean, highly likely.

Desperate Acts and State Secrets is out now digitally with a physical vinyl and CD release available to pre-order below for this coming November.