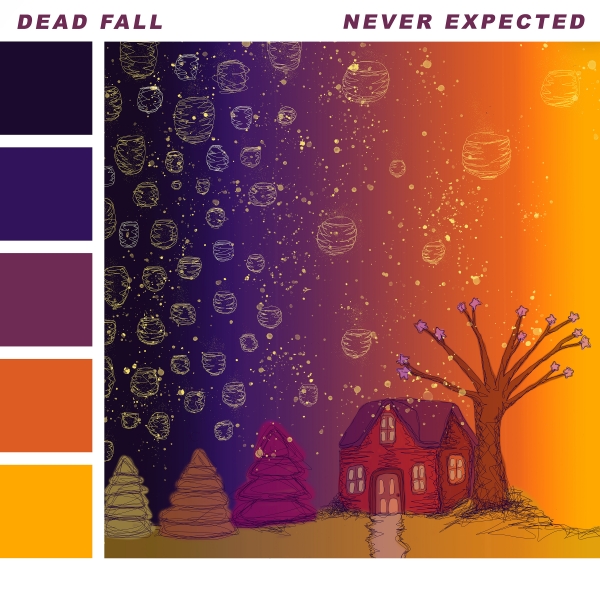 Taking inspiration from a whole host of Pop-Punk’s heavy-hitters from the last decade, Kent, Ohio-based Dead Fall are a band many will wish they had discovered sooner. The band’s sound takes many of the tried, tested and celebrated stylistics from the ubiquitous genre and its legendary 90’s roots but also an approach relying more on Melodic Hardcore and even Post-Hardcore or rather bands who themselves relied on such. Dead Fall do this to add a heaviness to Pop-Punk that has taken many forms over the years in a manner that for the most part, tactically avoids the more often than not (but not always) cliché sound of Easycore.

The band’s 2016 EP, Desperate Situations, showed a Pop-Punk band playing they genre their way but perhaps on the more mature side of the line without losing the youthful exuberance the style is known for. This is almost entirely down to Dead Fall infusing this genre-base with Emo, Post-Hardcore and sometimes “punkier” climes. However, roughly two years down the line, things have changed.

If ‘AC’ was a person it would be a huge and obsessive fan of the 2012 masterpiece that is Misadventures via Such Gold. This opening track is emotive, melodic and crooning on the one hand and mature, heavy, charged and angry on the other via well-charged Melodic Hardcore vocals and re-directed Hardcore via a certain Post.

The Wonders Years are a clear influence on the jagged Alt. Rock/Pop-Punk/Emo structure of ‘Delude’ as the band tease reigning in the emotive-release of the screaming vocals but ultimately decide they are better where they are; which they are. The Such Gold-isms are still out in force as Dead Falls technical ability lends them that extended reach into other genres and prospective line-ups. ‘Temporary Bliss’ plies early 2010’s jagged Pop-Punk with a near-classic vocal approach with contrasting backing vocals and hoarse partial screams. The band are adept at the classic melodies but clearly wish to avoid the overt near-Pop-Rock the genre has a habit of embodying to the point of cliché. ‘Temporary Bliss’ is another technically proficient effort and well placed in the middle of the release.

‘Drowned Out’ was the leaded single and for good reason. Classic Pop-Punk meets the now – or rather the now of Dead Fall – in the intro before a yet another hybridised verse-into chorus that again shows a leaning towards maturity matched with short, sharp and satisfying Melodic Hardcore infusions, that themselves not possible without the excellence of drummer Nick Baker.

Dead Fall choose to close with the eponymous ‘Never Expected’, where sombre Post-Punk-esque tone hangs over a slow, cumbersome intro before then infecting the initial gloom-ridden vocals that are immediately contrasted by more emotive half-screams. This is not the track you expected the band to finish on but half way through it’s duration, you aren’t complaining. – ‘Words that I thought would stay dead – but nothing is never expected’ – are words than ring true in the closets and cupboards that we often keep our shame, secrets and pain locked within.

The 2:40 mark sees the band follow emotive, Emo/Post-Hardcore towards a sound positively reminiscent of the notable masters of such, Touché Amoré. Again, this isn’t a track you readily expected but at the same time, to use the band’s own words – ‘[…] nothing is never expected’.

This an EP approaching the subject of, embracing and discussing the modern life-addled brain and all the issues, twists and turns resulting from it. If you like Pop-Punk outside of the box, then I would recommend it, wholly. – ‘Backed into a corner, without reasonable doubt, that I can’t deal with the consequence and there’s no way out  – Something small and simple can mean everything right now […]’

Gamblers and The Debut ‘Straight No Chaser’ EP.