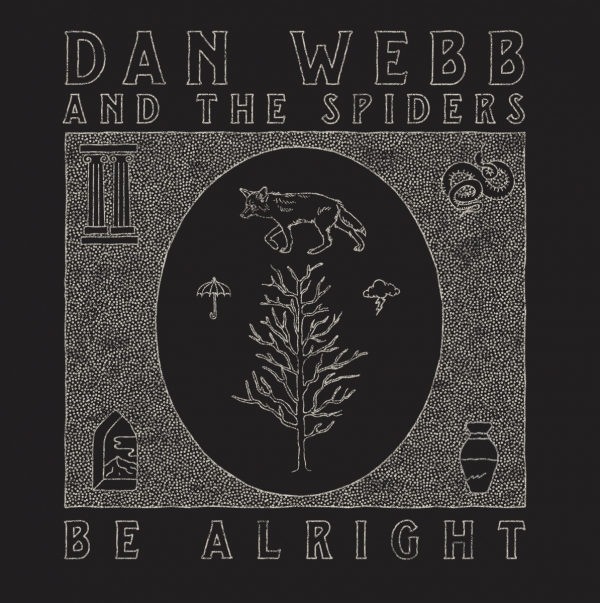 Dan Webb and The Spiders – Be Alright is a set of letters that can be said to be multi-purpose, for it is both a unit of people and their music as much as it is a unit of people with a mission. A mission in life via gritty yet playful Garage Punk-Rock taking influence from bands long gone.

Be Alright is the Boston-based band’s sort-of fifth full-length release with more than a few singles and EPs also trailing back into their (now) eleven-year history. The latest begins eponymously, with a wish to simply be alright. It’s not much to ask and yet many are forced to.  ‘Be Alright’ is a very bare-bones expression of such over classic Punk itself leaning towards the earlier Garage-Rock-ism of the famous debut by The Clash. Find it in our house playlist of life songs – Here.

‘Jerk In Progress’ is another for fans of the above via a little contemporary flare. Mr. Webb and the Arachnids are singing songs about life and do so plainly and to be honest, although only two-songs in, you’d be a fool to criticise it for that. ‘Complicated’ is one for those already aware of the band. Its heavy-Punk intro is reminiscent of their earlier material before allowing an almost Surf-Rock vibe to layer itself over the choppy, classic Punk drumming and vintage rhythms in yet another enthralling life song.

‘All The Way Through’ is another mental-health anthem of frustration befitting of the increased heavier-Punk direction, this time very in-line with contemporary and emotive Gruff-Punk. It’s an album highlight and will surely strike a chord with many.

A return to the more dated quirks of Garage Punk n’ Roll changes the album’s pace yet again in ‘Walk Right Out’. Dan Webb and The Spiders may well be cathartically conviction-laden but that doesn’t mean that Rock n’ Roll can’t be fun. ‘Acme Girls’ follows the same mantra but with another nod towards Surf-Rock relaxation.

Admittedly, within the context of Be Alright, it’s arguably the case of the faster the better but in generality, the band seem incapable of crafting a bad song. With that in mind, ‘Best Regret’ is yet another tempo-driven track making Punk-Rock fun again! I feel as if I cannot emphasize this point anywhere near enough in relation to how fun Be Alright is to listen too. Throw away statements are what they are but this isn’t one.

‘Best Regret’ employs more of the excellently placed melodic guitar-lines and leads that bridge the gap between the gritty Punk past and its modern albeit more melodic counterpart. The grit of the dated Punk is only contrasted more by this move towards a more modern sound and yet is in actually way more substantiated by it all. Well played.

The noticeable heaviness on display in ‘Credit’ pairs intrinsically with the excellent hooks of the verses. It is this late on the record that you also hear an awareness, accidental or otherwise, to the realm of Indie-Punk. It might just be me hearing things and going somewhat insane but play ‘Credit’ a few times and see how you feel.

‘Take A Hit’ is unexpected yet welcome. Slow, lumbering and layered in a way not seen yet on Be Alright, ‘Take A Hit’ is a real highpoint and sets the stage for the band to surprise you one last time in the piano ballad, ‘Notice’, which is where I shall leave you.

Be Alright is out now via Gunner Records USA.