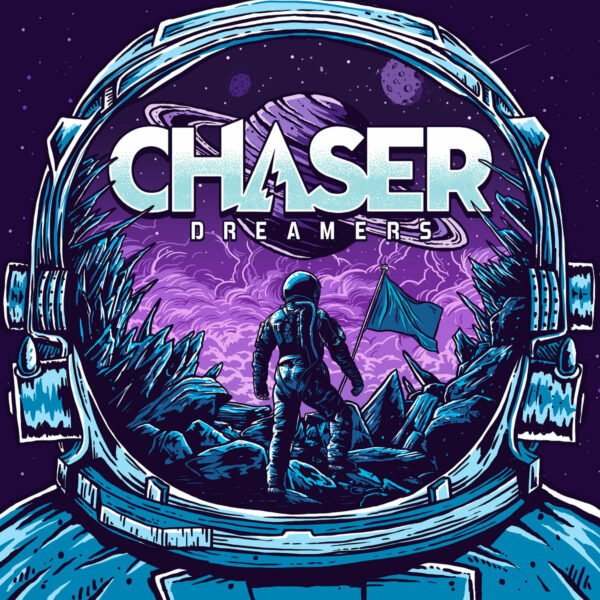 CHASER and Dreamers are VERY soon to enter the melodic-Skate-Punk-a-verse in their second mainline instalment after returning to said rapidly self-perpetuating pace-a-thon in 2018. The band’s Sound The Sirens was a confident, shameless and determined battle cry for positivity, community and celebration of the melodic fast-Punk formula born from their California home.

The melodic Punk explosion of the late ’80s into the “golden age” of the sequential ’90s took the world by storm. Skate and melodic Punk catapulted itself at high BPM atop soaring melodies and anthemic guitars across the globe. Wherever it went, it promptly inspired. Now, upon this 2020.1, within the now global melodic Punk and Skate Punk scene, countless variants hold their own and yet are inextricably linked to both each other and unequivocally to the very seminal SoCal blueprint.

Succinctly put, the above is the very reason why CHASER exists. Dreamers then! Are we? I mean, onward! 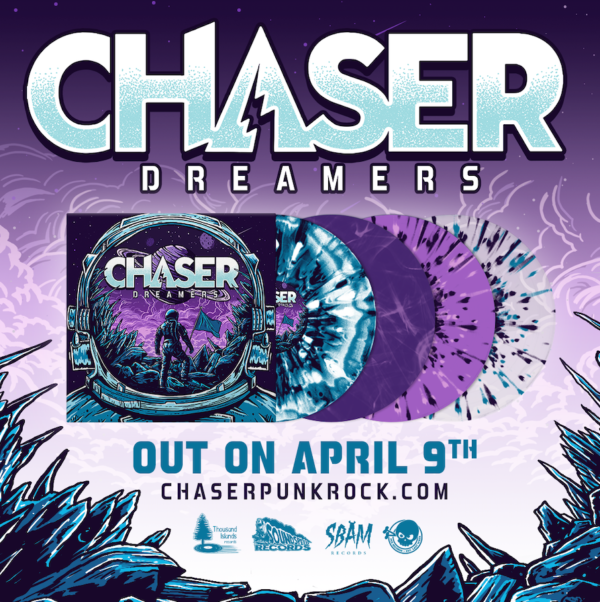 CHASER are nothing if not positive and post-clip of The Great Dictator, the band’s catapult fires its first tightly wound shot. ‘Fight Of Our Lives’ is classic CHASER-brand Skate Punk akin to their previous work but I’d be lying if I said the ante hadn’t been raised. Consider the pounding rhythm section of New Maps Of Hell-era Bad Religion. The band went deeper, harder and considerably more serrated whilst maintaining all the “isms” people adored them for. This is the transition of Dreamers‘-era CHASER. Jesse Stopnitzky’s bass and Davey Guy’s drums are of considerable note, whilst Bill Hockmuth’s axe dangles in front of it all as a supplemental personification and symbiont to Mike LeDonne’s determination, lighting the way for the four-piece as a whole.

‘2020’ was the first single and I would argue it to be one of the band’s strongest representations of who they are. LeDonne’s 2020 existentialism-sponsored words capture the, dare I use the word, unprecedented (shudder) nature of the year past as his hammer flies across room toward the nail. Stylistically, the band’s anthemic Punk continues to refine itself whilst simultaneously showing a keen, marginally more serrated and contrasting technical edge to Sound The Sirens. This is in no small part down to Hockmouth’s guitar once more. CHASER’s mid-to-late Bad Religion-isms push on and merge with a keen, vintage air of Lagwagon in the lamenting yet hopeful ‘Good Times’. ‘Signs of Life’ then takes the CHASER staple and adds a Mute-esque chaser of its own from vocal interplay to the whirling lead.

CHASER are known for their singalong, post-classic Pop-Punk approachability but it is increasingly contrasted on Dreamers. ‘A New Direction’ breaks rank and swaps precision for angular, low-driven, sardonically smiling rhythms and pounds downward. Five learns from the lesser-attributed school of Bad Religion and Pennywise in that fast bands don’t need to remain so constantly.

‘The Ripper’ then allows the contemporary tech-Punk to emanate from the band’s dark corners and collide with CHASER’s soaring norm. In short, ‘The Ripper’ is a top-tier representation of where the band are heading. They may not be quite at the level the Skate-Melodic Hardcore of the UK’s Dead Neck or others in that vein, but this small taster is no less than tantalising. ‘Echoes’ is lyrically hopeful in its microcosm but dwarfed and hounded by the outer macrocosmic battle. Seven is just a Punk-Rock song written by the people who can see something’s wrong.

The eponymous ‘Dreamers’ was marketed as an upbeat melodic Pop-Punk-Rock song and that is exactly what it’s No Use For A Name-esque harmonic defiance is. That and an utter ear-worm. Irritatingly so in the best way possible. ‘Break The Chain’ is rife with poignant imagery and in its late’90s jagged exuberance, is the intrinsic drive the point needs. CHASER are one of those bands that genuinely enjoy what they do. Every aspect of their output is positive even when it isn’t and it’s difficult to negate or criticise. The four-piece are shameless to the highest and unrepentantly confident degree and ‘Always With You’ is the perfect and very personal example.

Dreamers is hopeful but also beset on all sides with self-perpetuating realism. Life isn’t all smiles and there is always an encroaching frown waiting in the wings. ‘Only Human’ is the juxtaposing battleground. Dreamers maintains it’s socio-political edge and community compassion but make no mistake, it is a deeply personal record. This earnest, almost ironically haunting juxtaposition provides yet another fantastic symbiosis between LeDonne and Hockmuth.

‘Something In The Water’ pertains to a recurring topic within the societally-centric music scene and is no less than chilling. Screens are to be used, not to use us. Musically, the playful archetypical bounce of the ’90s is driven low with angular, pounding riffs and rhythms and a beat that just wants to escape the eerily en-point lyrical reality.

Dreamers closes with ‘See You At The Show’. In the only way CHASER know how, the band interchange between venerating the past and looking forward equally. CHASER openly gratify their influences. They vent personal knocks to confidence (with particular emphasis on the death of Tony Sly) and the effects of 2020 and yet sing in the direction of the light. The SoCal four-piece emphatically show their dedication to and champion the fundamental importance of the DIY, local and underground Punk scene in simultaneous adoration of their roots. ‘See You At The Show’ will make you smile.

CHASER and Dreamers are objectively the best possible versions of themselves. The four-piece are aware of the countless deviations of the ’90s Punk-legacy but have resolutely and not to mention naturally, crafted their latest utterly true to themselves and I cannot find fault anywhere.

Dreamers releases on the 9th of April via Sound Speed Records in the US, Thousand Islands Records in Canada, PEE Records in Australia and SBÄM in Europe. Find the band and all pre-order links below.