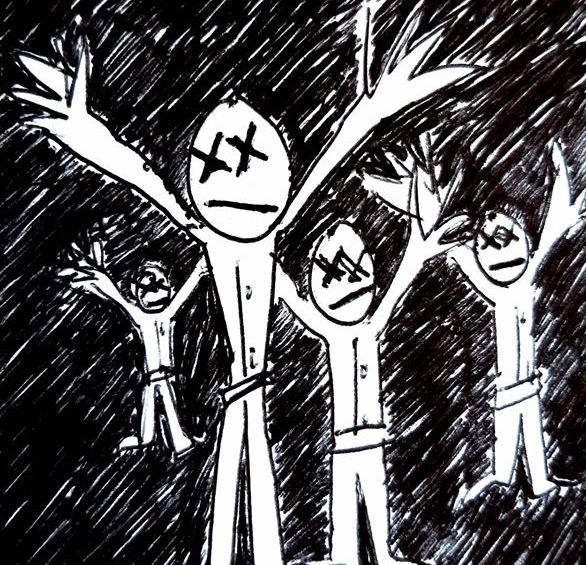 Underground Hardcore Punk is often an elusive aspect of the Punk music scene. One that CABRO and the HUMANO IGNORANTE EP mysteriously find themselves within. Both the band and the release are surrounded in mystery. In fact, the only real information that can be considered bonafide would be the HUMANO IGNORANTE EP and its release on Kibou Records.

Such mystery is also focussed on the band’s origins. It is said that James Domestic of – wait for it – The Domestics, PI$$ER and Bring The Drones is involved in some capacity. For those of whom that name is either not familiar or is but a little, the above purvey top quality dirge-Punk on the underground UK circuit. In short, CABRO are from a school of sonically aggravating, raucously visceral and ear-splitting Hardcore Punk taking what they wish from the genre’s various varied variety of blueprints.

Oh and one more thing. Despite its approximate geographical locale in south-east England. The band’s moniker, debut release title and entire vocal and lyrical output, is entirely in Spanish. ‘Azul De Muerte’ catapults into a release that is as raw and pure to the core as it can be. There are no production values on this six-track and the band feel –  ‘[…] all the better for it.’

HUMANO IGNORANTE is easy enough to translate and track two ‘Sangre’ translates to “blood”. Cabro are simply using another linguistic output to purvey their socio-political disgust. How do I know that? Well, if it isn’t obvious enough from the translated track names, the bands ear-destroying Hardcore Punk is proof enough. CABRO and the HUMAN IGNORANTE EP are not for the faint of heart.

But what of the sonics? High-octane would be a term I’d apply to the band’s own, ‘Feedback-laden, raw as fuck, primitive and groovy hardcore punk shit with vocals in Spanish’. However, in the rawest truth inline with such cathartic sound, that is indeed, to invoke the age-old maxim – about right. Stripped down and quick beyond all sense of the word, ‘Azul De Muerte’ is true to classic UK underground ‘core. ‘Sangre’ on the other hand, is laden with mid-paced groove and as sing-a-long as the band get.

CABRO approach Hardcore with very, very little to contrast the fuzz on the counter. However, it indeed works beyond all of this. ‘Suicida Navidad’, is perhaps the strongest of the Fastcore on HUMANO IGNORANTE, but only just. The release as a whole only relents and repurposes its rage where it is absolutely required. Vintage and proportionately placed groove-chord progressions compliment the rarity that is the slower-rumble as much as they do the breakneck and tenacious pace. CABRO even allow the odd melodic lead-line and or solo to teasingly-tease and contrast just because.

It’s a real notable review when you have absolutely no need to comment on production value. HUMANO IGNORANTE is shockingly clear in its rawest and most intrinsic state. HUMANO IGNORANTE is a release you can play over and over again based on its sheer super-human energy alone. It captures the raw thoughts and feelings of rage to Hardcore that the genre strives for effortlessly.

Six songs? Eight minutes? Kibou Records and their roster and distro? Cassettes? Another on the side-project list of possibly James Domestic? CABRO and the HUMANO IGNORANTE EP? Sounds about right.