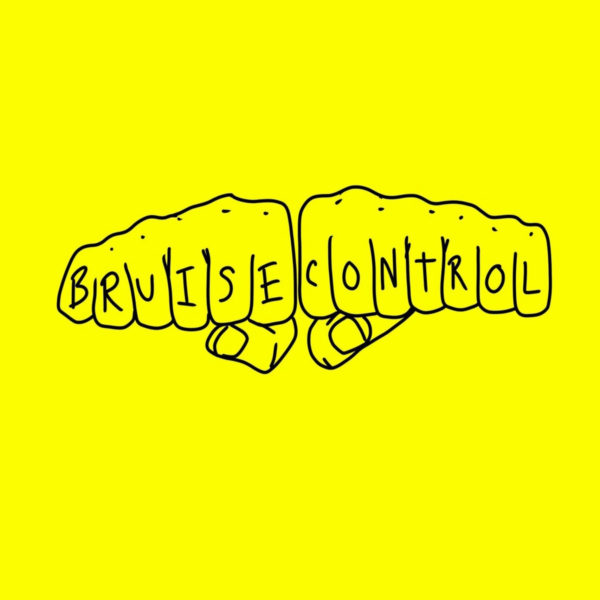 Bruise Control and their Self-Titled enter into a 2020 that, for lack of a better everything else, has kept full-capacity in-ear live gigs to a recurring maximum. In other words that aren’t quite so ridiculous and do have some functional meaning when collated into a sentence, 2020 is has been a busy year for underground Punk and Alternative Music despite everything. This is where Manchester‘s Bruise Control enter via Rad Noise Records. Now, I am still playing catch-up with 2020’s releases, so, I may have missed the initial party but given the ubiquitous nature of music and it’s state in the universe, I think I am excused.

The debut Self-Titled from Bruise Control, despite its four-track stature, is ambitious in its Punk-spanning-scope. Within seconds of the self-deprecating yet determined ‘Useless’, the band’s British Punk sound merges the discordant, upbeat and distorted sound of both Dischord Post-Hardcore and early Dag Nasty. However, it goes further, the opening track of the band’s debut is cutting and driven in the manner of Lifetime in the extension of this melodic git. Finally, completing this concoction, Bruise Control’s craft is laden with quirks and sharp playful and raucous Garage Punk n’ Roll. Some would say that you can’t make this up. However, those people would be wrong. Bruise Control have and its rambunctious abrasion is undeniably infectious.

‘Bruise Control’ opens its eponymous self with pure-to-form Rock n’ Roll Punk. Here, the band’s obnoxiously playful Northern English variant of British Punk is notable for all the right reasons. Not that I would ever suggest that the British Punk of the past often treads on the line of being questionable. I would NEVER say that. I digress, ‘Bruise Control’ fully embodies the Rock n’ Roll flare of ‘Useless’, gives it a home and brilliantly aces the precarious and infamous “title-track” game.

It is here, post-title-track and within its penultimate blast that the band alternate again. The Dischord Punk and Post-Hardcore and Lifetime rumbling crossover more than imbues the debut Bruise Control vanguard. ‘Come On Down’ still maintains their quirks but enlists a reverberating groove and bass tone that would be hard-pressed to go any lower. The band anchor themselves to a gloomed existential catharsis contrasted by guitars that in a tone either acts as a hopeful contrast or a sardonic accompaniment. Music is in the ear of the beholder.

Bruise Control embody vintage, discordant Post-Hardcore ala early Fugazi or the limited but seminal work of Rites Of Spring or Embrace on the closing ‘Disco Fury’. The band’s already choppy-Punk takes an off-beat tone and structure riding on the excellent spasmodic work behind the kit. Now, of course, despite this onset gloom-ridden, abrasive stop-start sound, Bruise Control’s inherent quirks are present, but further warped and over-encumbered by a tonally dismal vat of contemporary societal lacquer.

If you were to pass over this EP as just another DIY Punk blast of disdain and move on, you’d be making a mistake. Despite their four-track run, Bruise Control has delivered an unpredictable EP that has propagated a further foundational unpredictability. In yet another concise and functional variant of another previous sentence, Bruise Control are vibrant, varied and have boasted an excellent starting point.

Bruise Control and their Self-Titled were debuted to the world via Rad Noise Records back in June and you can find all things pertaining to both below.