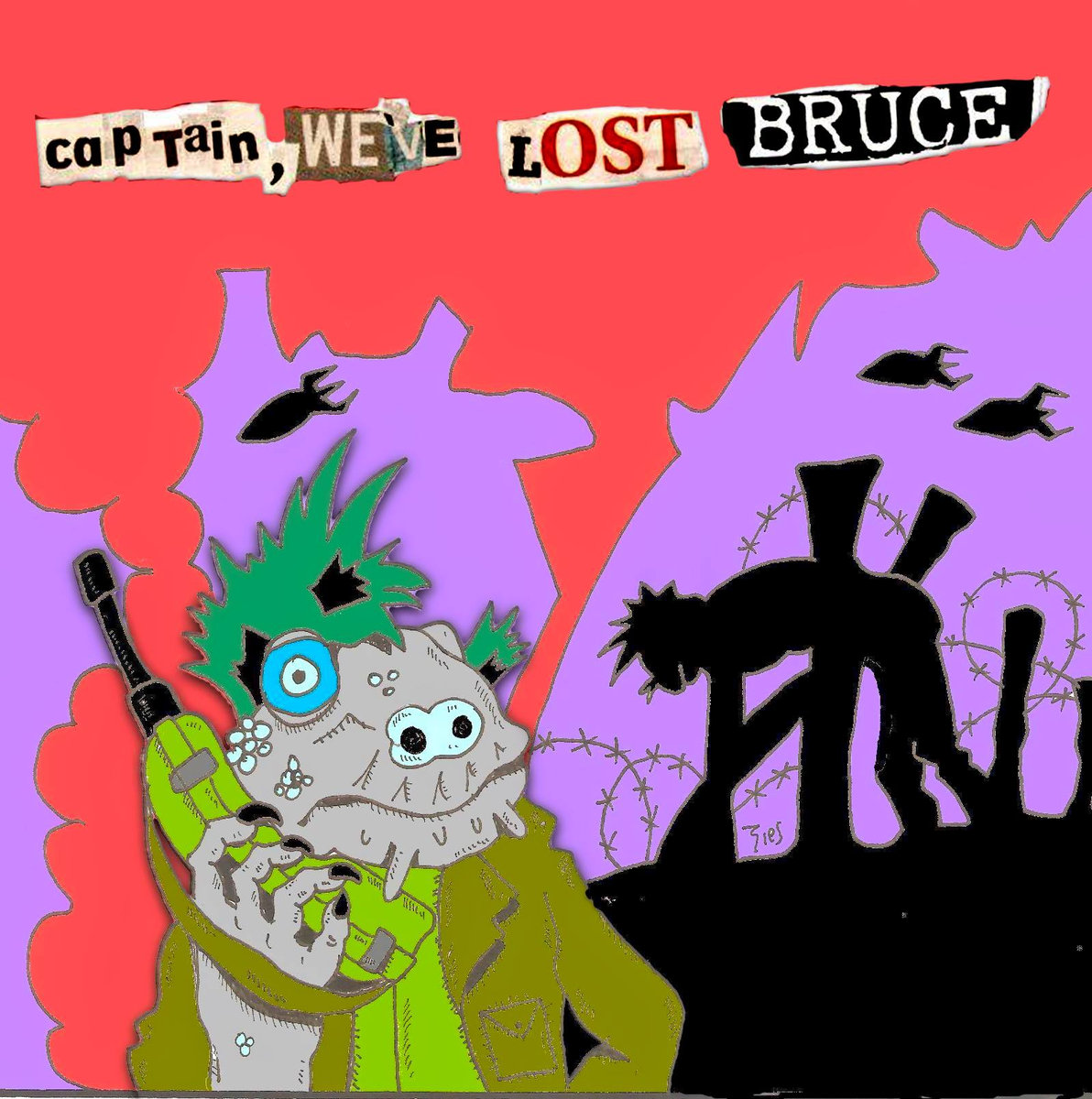 Punk music can be said to raucous all over the show but with its myriad of diversifications much of said raucousness and writhing impatience has become far more localised to specific parts of the contemporary genres wide array of styles. This is where BRUCE come in, the Belgian three-piece have one foot safely in the realm of gritty Garage Punk and the other unpredictably moving around the other umpteen realms of Punk.

I can say from the off that this album is fun, addictive and well worth your time. Those wishing for tones more akin to classic and classic-esque Punk will be more than happy and those firmly set in the present but with a penchant for such an older medium will also be quite content. The eponymous opener, ‘Captain, We’ve Lost Bruce’, is short, sharp, witty and hits you square in the face as a Garage Punk rendition of the sound seen on the famed debut Bad Religion record.

The 1:02 mark carries pangs of early US west-coast Hardcore Punk with the warped guitar tone of BRUCE marking it as their own. This then follows to a Minor Threat-esque riff and another Garage Rock n’ Roll Hardcore rhythm that tells you to kick up a fuss whenever you feel the need too. ‘Bucket List’ is yet again another blend of classic Punk and Hardcore filtered through raucous Garage Rock, onset with clear tones of the band’s penchant for the Aussie styles of the genre with particular focus on the Cosmic Psychos.

Much like early Punk-Rock and Hardcore albums, there is a certainly level of repetition as you approach the half way point of a full-length and that is where the view of the contemporary scene and its populace will often differ. I have no issue in saying this album is very much an example of such to a point and that its entirely down to the listener onto whether this is a problem. Again, I will gladly say that isn’t so much for me, for the band’s quality it is seamlessly and unapologetically consistent.

As much as I have just written those very words, Captain, We’ve Lost Bruce does diversify with ‘Amanda Stopwatch’ teasing influence from The Clash but majoritively arriving at you ears via Leatherface and Social Distortion; with the latter very obvious in the Cow-Punk guitar-tone. Said track is expertly placed as the The Clash-isms are revived again but applied to what can only be described as Rock n’ Roll crossed with chirpy melodic 90’s Punk. See how you feel on the matter?

This brief flirtation with 90’s Punk could not be more prevalent in the intro of ‘The Referee From Tonypandy’ as BRUCE simultaneously assert their Garage Punk dominance as that one foot takes over the reins ahead of that indecisive adventuring other. The witty 0:57 of ‘Six Inches Playboy’ embodies the hybridised Rock n’ Roll 90’s quirks once more and again saves an album from the same old sounds depending on perspective.

In what I can only assume is Flemish, the band open the penultimate and album highlight of ‘Refreshment Trolley’ flirting with both Bad Religion and early Hardcore-isms before another Leatherface leaning but also 90’s Punk appreciating chorus. The track sets the stage for the closing ‘Wait Till You See My Tattoo’ where BRUCE do their best to encompass everything they have flirted with, touched upon and corrupted on this third full-length.

I had fun, will you?