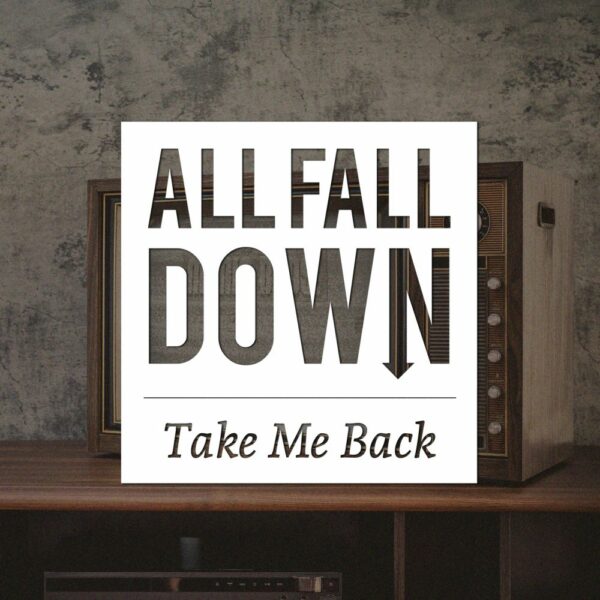 With all Punk’s fantastic sonic vibrancy and genre-crossing tendencies, All Fall Down and ‘Take Me Back’ enter into the fold via the seemingly inexhaustible fuel source that is melodic Punk-Rock. The very medium itself has also come along way. The ’90s blueprint has merged, morphed, infused and been infused. And so, the debut single from Peterborough‘s All Fall Down then.

Notably, the band are in good company from the very start of their debut. ‘Take Me Back’ was mastered by one John Harcus of Pmx and Harcus Audio fame, so there is no surprise regarding its clarity. The band’s self moniker of ‘melodic Punk-Rock’ is rather telling of their first single, for they mention Skate Punk not once. The genre has seen a huge rise in the latter stylistic and its contemporary variant but in ‘Take Me Back’, it is only used to further the band’s poignantly sad, frustrated, bewildered and beaten-down lyricisms.

‘Take Me Back’ is inspired by and plays to a backdrop of the last five-years and arguably further. All Fall Down’s debut ruminates on and wishes for escapism. The band wish to leave behind the maelstrom of conflict caused by intolerance resulting from hateful campaigns, targetted echo-chambers and the social media-verse. Needless to say, this is easily quantified by examples such as Brexit or the historically notable late Trump administration. We are living in an age of polarised division and ‘Take Me Back’ is a cathartic and defiant response. Now, back to the music.

All Fall Down are a melodic, anthemic and emotively-charged band through and through. That much is evident from the evocative tonal line guiding the slow progressive chug of the intro. The band then crash through tightly-knit late ’90s Skate Punk in pace matching the determination to escape of the above. From then on, post-chorus, the band retain their moderately heavy-set and jagged edges but increase their melodic output, move down-tempo and become reserved. Musically speaking that is.

Post 1:39 AFD fall into a two-stage refrain, bridging them into the next verse. It is here that the rumination of the meaning of the track is really felt and is instrumentally quite pleasing. That said, the band’s stark dichotomy between their fast, vintage Skate Punk opener will likely leave a hole for many that isn’t filled but in the (kick) flipside ‘Take Me Back’, in my opinion at least, wasn’t supposed to be the breakneck charge that I’m sure the band are capable of. ‘Take Me Back’ takes a risk but its beckoning melodies are very much that. The fast intro was very much the hook, while the line and sinker are just playing with your ears therein. There are notable whirling leads, layered guitar lines and harmonies that glide over a rhythm-section poised to contrast and hint at later, darker displays.

All Fall Down have a very open-faced blueprint and plan to release three more tracks over the next six-to-nine months.