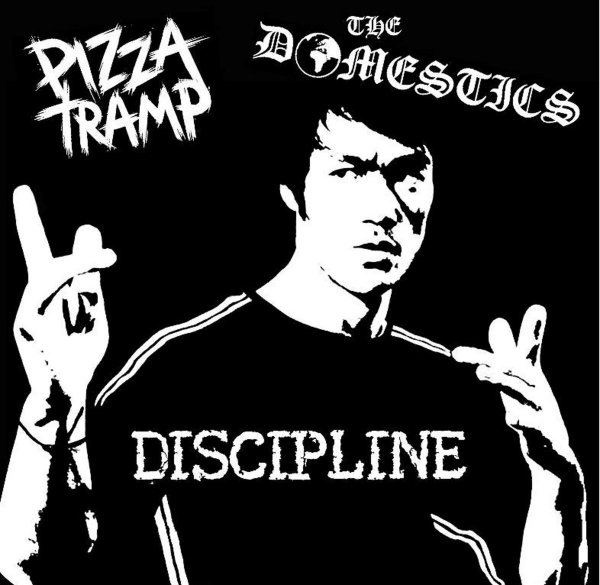 TNSrecords are a well known and respected household name when it comes to Punk-Rock music, the label is non-profit and operated more as a community within its organisation and importantly it’s roster, with just about anyone and everyone involved in any way doing their best to support the underground scene. Isn’t that nice?!

Anyway, stellar work aside, the label recently decided to release an EP split between two of UK Punk’s faster and abrasive Punk-Rock bands in the form of The Domestics and Pizzatramp. Now, that isn’t really too much of a monumental thing, “great label puts out split from two great bands”, no  – it’s all in fact in the method this time around.

Both bands have compressed three gapless unrelenting tracks clocking in 0:57 in total each onto, now get this, a 5″ record, something the press kit and bandcamp notes lovingly describe as – ‘A concept record? A totally stupid record? A disciplined record? All three possibly…’. Nail on the head? That’s a yes. 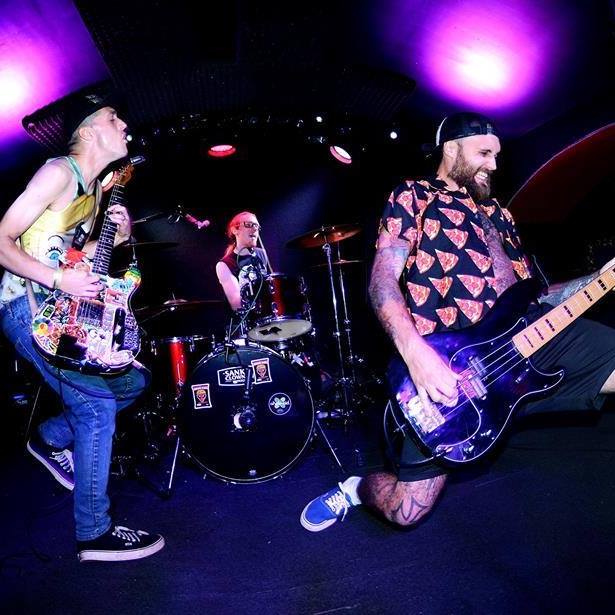 But why not a 7″? It would have been easier indeed but nowhere near as adrenaline pumping and sonically accosting enough that you following each 0:57 burst, you feel like someone gave you right kicking-in. That, in a nutshell, is why a 5″ was settled on, well, sort of. In actuality it was a test of mettle for two bands known for their blistering visceral blasts of Hardcore Punk, confining them to see what they could do. So…

The Domestics hit you first with the 0:24 of ‘Fuckin’ Die’, a time frame perfect for the wishful demise of the self-centred which the band utter as fucking honestly as is possible within the English language. Once said person has apparently demised, ‘A Quiet Life’ has an ironic existence of about 0:17 before the band attack materialism, again as directly as is fucking possible and forcibly uptempo as their bodies allow in ‘Shopping’. The Domestics aren’t a fan of life or it’s apparent meaninglessness it seems, see the chronicle below in visual form.

Pizzatramp shows are always a laugh, I could use some (other) grandiose language to describe them but it would be pointless. The first time I saw them I remarked to a friend – ‘They sound like Gorilla Biscuits on speed and not remotely serious’. Perhaps, but I digress.

‘I Went On A Double Funded Kickstarter Holiday To The United States Of America and All I Brought Back Was This Shitty Fucking Album’ has a title longer than any Tumblr post-Fall Out Boy song hybrid and really doesn’t need to be explained by me, for its THIRTEEN seconds are crystal clear.

Life? Normal life, what is it? Not for Pizzatramp, that’s what! The record’s loose concept spans nihilism on both fronts. Much like The Domestics, Pizzatramp’s effort is classically aggressive and again – unashamedly blunt in nihilistic thought BUT through doing this, if you think about it – if you can following such a release – is actually really quite intelligent and insanely disciplined. If you were wondering, track two of this side is (un)lovingly titled ‘I’d Do Normal Things and Have Normal Hobbies Like Normal People But It’s All Just So Fucking Boring’ (0:23).

Finally, ‘I’ve Got Nearly As Many Holes In My Brain As I’ve Got In My Favourite Socks’ is an interesting image, to say the least. A trusty pair of socks is always very much that and will seldom let you down but in this case, I think Pizzatramp may need to go shopping. This final (just about a) track is a twenty-one-second thrill-ride of classic Hardcore Punk rounding off one of the most entertaining releases of the year.

A 5inch Record?! The Domestics x Pizzatramp – Discipline. Yes, as it turns out, you did read that correctly.

Diploma Return With ‘Love On Your Knees’.