After a debut EP that is best described as incendiary beyond the band’s simple two-piece structure, The Sewer Cats and Cute Aggression loom. Poised, tightly wound, full of tension and yielding nothing but anticipation from fans those who have experienced tidbits of the new material live. It’s safe to say then, that the Manchester two-piece have, based on said debut and what I’ve seen of their live shows, garnered quite the reputation.

Garage Rock, Punk, vintage Hardcore and rooted Riot Grrrl met with serious but sardonic, sarcastic and unapologetic political commentary. That would perhaps be the best descriptive “one-liner” for The Sewer Cats. Well, with a slight N.B denoting their penchant for felines, but that’s not overly obvious anyway. Who came up with that idea? Anyway, April 15th is the day and TNSrecords is the great provider. The Sewer Cats and Cute Aggression, then yeah?

Though the band have always defined the word brash, within seconds of the far from undulating ‘Answer The Question’, The Sewer Cats’ raucous Punk markets a more targeted and confident snarl. Track one channels a heavy and pulsating frustration, one equated by and effortlessly flung around by Josh’s lone axe, all the while a resolute yet frantic beat along with Cass’ unmistakable voice box yearn for an answer. Though, I doubt they will get one.

Blues and its legacy can be found in just about every corner and on the reverberating ‘Delia’, it drenches The Sewer Cats underpinning Garage sound with a filthy, all-encompassing viscous layer of distorted charm*. A looming, slowed and doom-laden Hardcore rears its lumbering form on ‘My Dark One’, as the band’s pool of influences takes another turn but three tracks in. Riff-heavy and menacing, the simple forays of the band’s debut are suddenly raised in importance for the catalytic flexes they were on account of how they have fed this newer sound. However, of course, and fantastically, such lumbering steps are revealed to be a literal flexing stretch of their own as track three breaks into a satisfying sprint.

*’Delia’ actually has an interesting story behind it that I implore you to read – Here.

Four takes a tongue in cheek but in reality all too real look at the contemporary music scene. ‘Sausage Fest’ calls for change, shouting, screaming and screeching its catalytic cry with ripping guitar work to match, playfully taking its own audible jabs at swinging “guitar-members”. The Sewer Cats weaponise humour but only to sharpen their point. Next, ‘Shit In Your Hands And Clap’ is ominous and melancholic and yet only in a preface to another fantastic blast of unadulterated Hardcore Punk prior to the stand out ‘English Spaghetti’.

Brexit Punk is where the aforementioned track six resides. The triumph of (mainly) English Racism, the myopic nature of ill-informed rhetoric and the prevalence of flag-shagging populism have yielded a fantastically en-point and sardonically charged swathe of (sadly) poignant Punk. That was a long sentence. In this case, the two-piece boast what I would argue to be their best. A combustive and jarring jaunt of frenetic vintage Fugazi-esque Post-Hardcore cut with its latter self sees the band delve further into their pool of influences. Further in, this frustrated catharsis is contrasted brilliantly by short, sombre Post-Rock-inclined refrains designed only to allow the entirety of this big old farse to hit you. As hard as a big red bus.

‘Will To Survive’ wildly recounts four-wall mania through frantic and warped Garage Punk that is as wild as its sequestered protagonist whilst the writhing Blues returns in the playful ‘Can’t Quit You Now’. It’s in tracks such as these that everything the band became notorious for on their debut is as refined as it is enriched. The band’s voracious nature can no longer locate its previous ante as each riff coalesces with the gusto of Cass’ vocal presence with Josh then confidently going further, creating an impressive and unexpected depth. 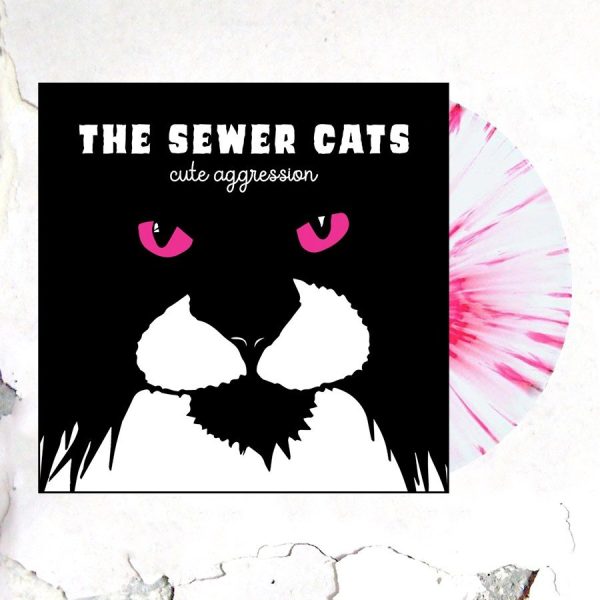 ‘What Do I Know About Men?’ is yet another highlight on a record that pushes more boundaries than you’d expect from the band. And, that is meant with no negative connotations. A fuzz-drenched, violent and Blues spun Post-Hardcore Punk soundtracks a bitter retort to institutional misogyny and behaviour you’d think we’d be passed by now. However, we aren’t and this song exists; defiantly.

It’s truly hard to keep track of The Sewer Cats on Cute Aggression. Despite their limited appearance, their musicianship is truly unleashed on this release. ‘Russian Doll’ spins their Garage Punk through more Post-Hardcore refrains lacing Punk-filtered Post-Rock together with all the rest. Limited? More like “limitless”.

‘Five Minutes’ is the evocative melodious ballad you never expected from The Sewer Cats and it’s an unequivocal high point on the release, despite its sombre lament. The band then close eponymously, motioning from an intense, cycling rhythm edged in a wild melodic lead twisting and contorting itself to the very same spasmodic energy that epitomises Cute Aggression as a whole.

‘We thought it would be a good title since our songs are always absolutely fuming, even if they happen to be about something pleasant!’