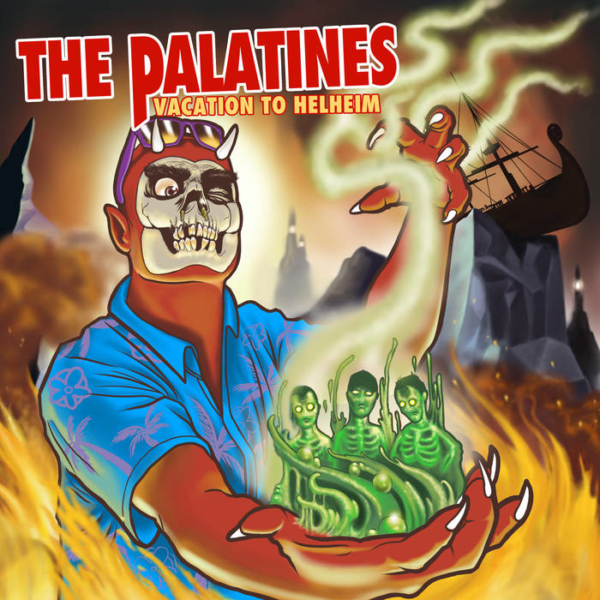 The Palatines – Vacation To Helheim is a collection of words that denote to some sort of meaning implying two possible outcomes. It clearly pertains some sort of Punk release, that much is obvious but beyond and within that, in what manner do they associate with such sonics?

With a band name, album name and artwork such as that, your ears are either about to be accosted by gritty ’77-style Punk that hasn’t moved on or melodic ’90s Punk overtly laden with the term “Pop-Punk” and all its playful connotations. Still with me? Good.

It’s the latter by the way and Vacation To Helheim is the second EP from a band capturing how the playful nature of Punk went full-circle. Punk-Rock was the late ’70s reaction and arguably emulation to the popular Garage Rock and Pop put forth by seminals such as The Beatles, The Who and many more. The Ramones were born from such and then Punk was born. More or less. ‘Too Poor’ very much takes this fast, simple, stripped and melodic sound in its ’90s form ala vintage Face To Face.

‘Too Poor’ is playful and yet the perfect ode to school days past and the divide money creates between us all. The Palatines are perhaps best described as Punk-Pop. Which is itself a far more befitting term. ‘Hikikomori’ tackles turbocharged “Ramonescore” in a manner clearly purveyed by fans of Teenage Bottlerocket and The Lillingtons. ‘Hikikomori’ is Punk-anthem of perpetual isolation, loneliness and ostracisation in the tried and tested fast-punk-shout-feelings-fast-punk formula.

‘All I Need’ slows the Ramones-appreciation down but only in pace and marginally at that. The Palatines in many ways should be viewed in the same way as the Descendents, they are either playing Pop-Punk as it should be played or rather playing Punk-Rock in it’s classic most form. ‘All I Need’ is a release highlight, find it in one of our house playlists – Here.

Fans of Face To Face and Teenage Bottlerocket will enjoy the charged, hook-laden, tributary Punk sound in ‘You’ll Remember Me’. On that note, it’s with this fourth track that both Richard’s and Javi’s vocals truly reach the peak of their Trevor Keith, Kody Templeman, Ray Carlisle hybridisations.

The three-piece are embodying much of what made Punk-Rock so accessible to them and doing the same. I’m not going to lie and say its groundbreaking and contrastingly different, because it absolutely is not. It does, however, very much “work”. See ‘The Cleaner’, a track that boasts band’s lyrical prowess at some of it’s best.

Chances are that if you knew the band prior to hearing this release, you probably saw or heard this next one. That was the case for myself and the band chose to market it for good reason. The eponymous ‘Vacation To Helheim’ closes the band’s holiday to four-walls-hell. The track pushes boundaries towards vintage Skate Punk with melodic lines in the manner seen throughout the band’s discography but not pursued fully until now. ‘Vacation To Helheim’ embodies much of the EPs themes through the same honest yet playful delivery in a manner, at least to me, resemblant of Denver’s Over Time or Filthy Hearts. Reviews on whom you can find – Here and Here.

The Palatines are for lack of a longer description; brilliant.