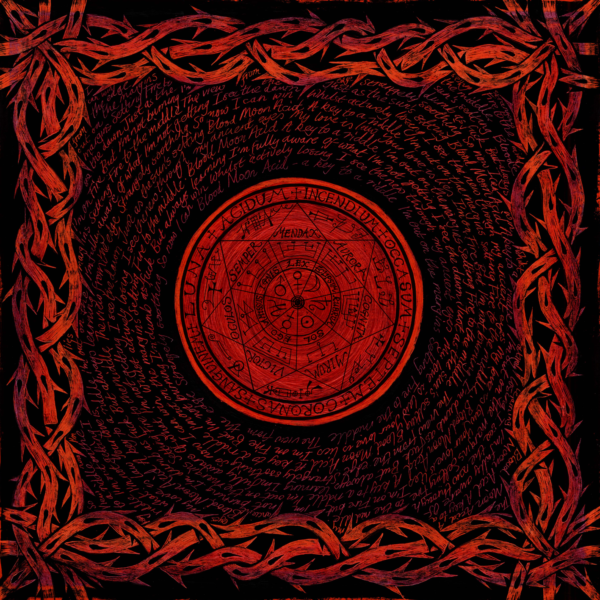 Seven Crowns and Blood Moon Acid. These are words capable of inciting a lot of eye-brow raising and ear-twitching within the south-west UK Punk scene. The broodingly dark, damp, yet sonically vibrant locale of cider and broad-accents is a tenacious hub of underground music. Within this and denoting to Punk-Rock, Seven Crowns have been an elusive yet ubiquitous moniker for what feels like an eternity. Located specifically in and around the city of Bath, the band’s history of live shows in the locale and across the region have never garnered anything less than the regular use of the words, relentless, tenacious and sonically eviscerating.

Despite a huge and varied history, for public consumption, the band’s three albums crash through reverberating groove-laden Hardcore Punk denoting and tributing to the sweaty blueprints of the trailblazers. Seven Crowns then duly apply uncompromising latter timeline rhythms, quickfire power chord progressions and unsettlingly-adrenalised and tightly-wound drumming finished with consistent vocal disdain. Seven Crown’s progression up until this very day has been permeated with outside influence to varying degrees. Warped, contrasting, yet intrinsic Psychedelic Hardcore Punk would finally take shape on the 2017 Lightning Rod and set the new creative benchmark. Until now of course.

Seven Crowns are releasing no teases this time around. However, EN to had Blood Moon Acid early and this how it went.

Seven Crowns choose to elude to these complexities with the opening 1:28 of ‘Custom Of The Sea’. The band’s refinement at this stage of their career is evident in a track that again, tributes the music that inspired them while still leaving you wondering on the legacy of the former. ‘Custom Of The Sea’ is the safety prior to the impending plunge. ‘North Sentinel’, on the other hand, is an uncharted and volatile verticle drop.

Opening via the guitar-strings that owned Lightning Rod so seamlessly, Seven Crowns forebodingly build toward a blast of cathartic “standardised” Hardcore and then seemingly discard it. The band’s stark, quick-drop contrast in tempo falls into rhythmic Stoner-groove before a vintage Post-Hardcore-ism infects the verses led by an eerily alluring and warped guitar-line. This new-found hybrid interchanges as you’re sat there fearing an eventual rush of adrenaline. A rush you then get entirely on this hybrid’s terms. As ‘North Sentinel’ begins to echo Hardcore Punk once more, it does so near matching the exponentially more present vocal-interplay that is amidst its own frantic confrontation. ‘North Sentinel’ is a change to mission parameters rather than a statement and warrants a repeated immersion to comprehend. Blood Moon Acid is not an “easy” listen and wasn’t designed to be. 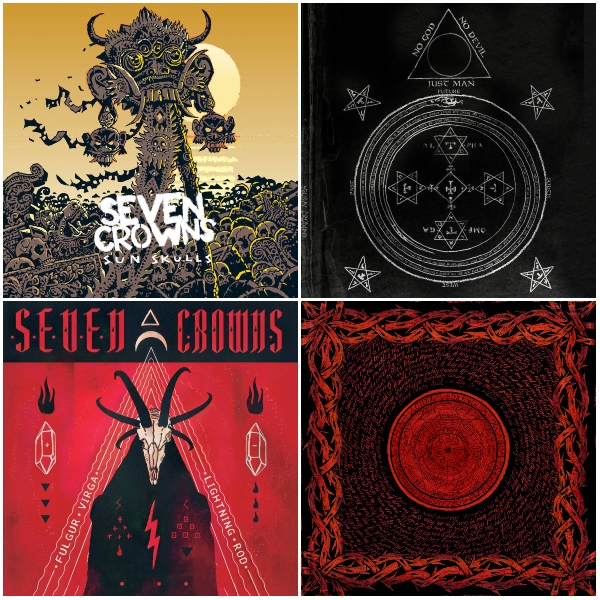 Akin to Seven Crowns previous effort, Blood Moon Acid is dramatic, raw and rife with spasmodic tempo and dynamic changes. Seven Crowns are clearly showing off but it isn’t that simple. The four-piece are showcasing their technical abilities and desire to twist their Hardcore foundation but thankfully avoid pontification. ‘Blood Shot Eye’ is another vintage tirade of their roots-sound but is still in line with the unsettling and unpredictable progressive energy this era of the band emanate. It is important to note two things here. The first being that the crisp production of this EP is a substantial part of its clout. And secondly, that despite all this time in a career spanning multiple styles and personnel, vocalist Monty is still an unequivocally terrifying force. In fact, given the increased vocal presence of both guitarist Liam Baker and bassist John Bainbridge, the band boast their best vocals yet.

Seven Crowns care little for your exhaustion and have near-completely nullified your resistance. The eponymous closer notably features one Stig C Miller of seminal ‘core-progressors, Ambeix. Stig lending his vocal and guitar tones respectively is unquestionably fitting to the EP. The four-piece intricately lather layer upon layer of haunting tones in ‘Blood Moon Acid’. Further vocal wailing and near-demonic chanting leave you uneasy as the only consistency in your life becomes the rumbling bass of John Bainbridge and the perpetual anticipation of Rob Clark’s drumming. In truth, even with the band’s previous albums and prior three tracks, ‘Blood Moon Acid’ is still comparatively unconventional.

This latest EP from Seven Crowns was challenging prior to the final blast yet still in some sort of discernable check. The above layering, warped Psychedelic-Crust tone and Post-Hardcore-esque dirge perpetually approaches cataclysm. The permeating warped and discordant melody that has led to this final maelstrom of terror is the master of the aforementioned consistency. ‘Blood Moon Acid’ is its own master.

The track ends with violent imagery following a strained ‘Nooooooooooooo!’ acting as a precursor to further violent blast of Hardcore Punk in another fundamental statement of foundational inspiration. Their Hardcore is serenaded by a cacophony of layered, competing vocals that finalise the mortality of your resistance. This closing blast washes over your husk after a four-track EP that punches with the combined force of the band’s career to date.

That was Seven Crowns and Blood Moon Acid via exhausting, challenging and ambitious Hardcore Punk that I implore you to try.