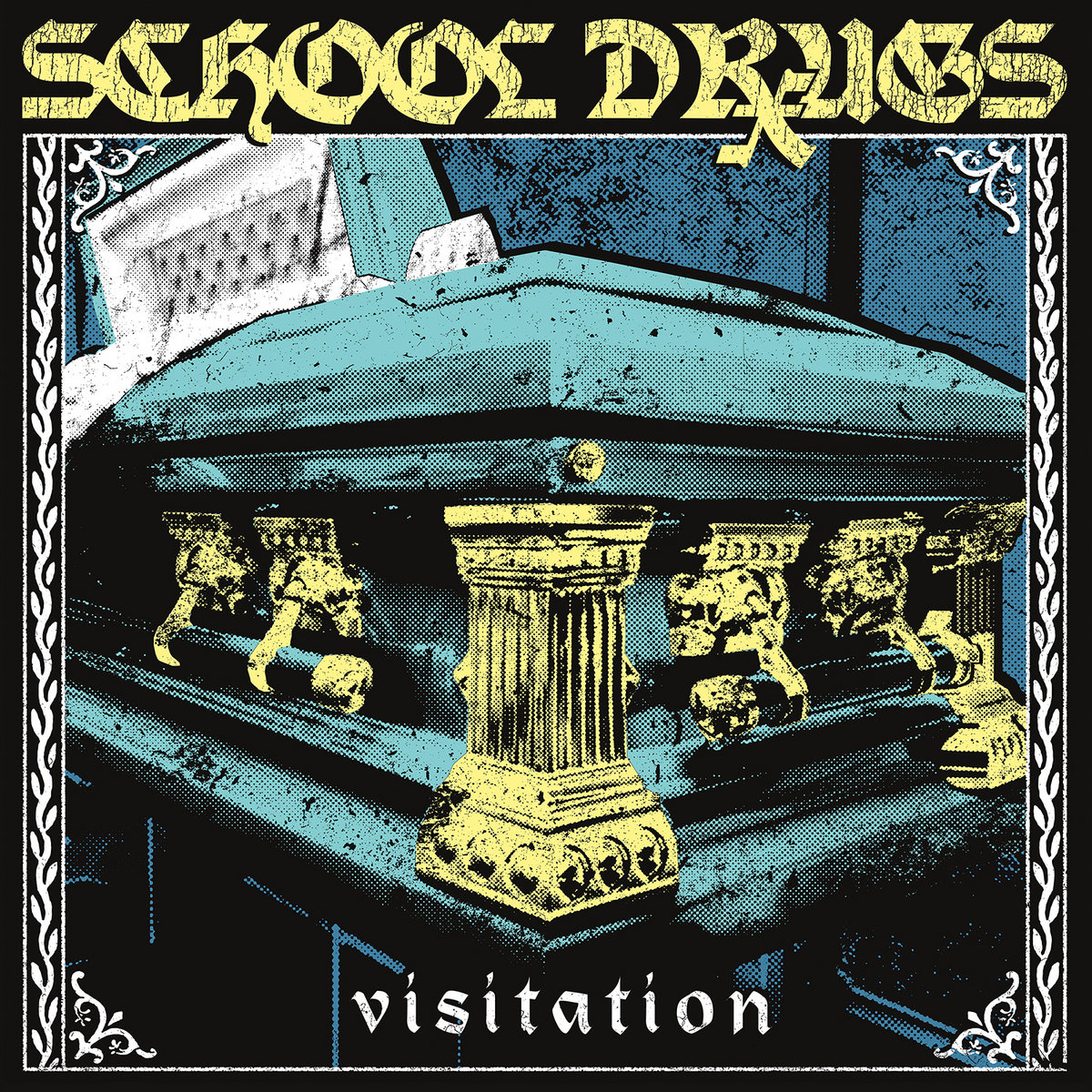 School Drugs and Visitation // #1. Today’s topic. School Drugs are a Hardcore Punk band from New Jersey that, as a result of contemporary existentialism and the manner in which this earth is hurtling and quite sardonically spiralling uncontrollably into the abyss, can be said to be quite joyless. That, at least, is relevant to their 2019 full-length of which a full review can be found – Here. But, what of School Drugs and Visitation // #1 ? What does that “#1” denote? Well!

That would be some four-stage Funeral Arrangements. School Drugs are set to release their new full-length in four parts via Indecision Records across four 7″ records and Visitation is the first three-track run. Shall we?

Visitation begins with ‘Dead Vine’ as the first of the Funeral Arrangements. The band’s last release, at times, pushed a more refined, streamlined and melodic sound alongside the visceral Hardcore and track one does the same. ‘Dead Vine’ pushes a powerful yet stripped back stop-start Hardcore echoing the (west coast) early days as the foreboding Crust Punk-esque guitar tone of the previous record pervade it. Pervades, but then morphs and pushes School Drugs elsewhere. ‘Dead Vine’ is resoundingly melodic and precision clean-cut without losing its initial power. School Drugs then continue to expand via what can only be described as a gleaming but by no means gratuitous level production. ‘Dead Vine’ is a melodic Punk song filtered through an aggravated Hardcore gauze. 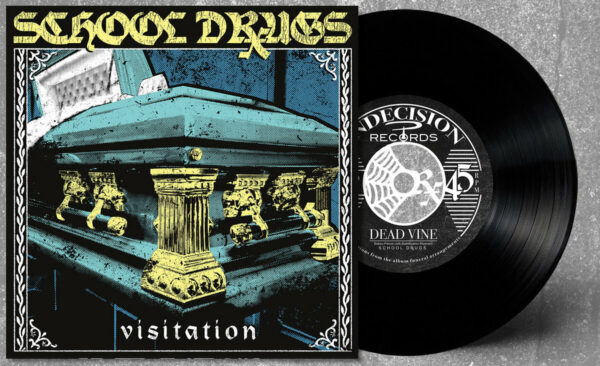 Are there hints of Brian Baker’s work in Dag Nasty and Bad Religion? Maybe. Could there also be a rendition of a turbo-charged Modern Life Is War? Perhaps. I’ll leave that with you to ponder as your listening progresses after reading. I’m also going to throw the name “Gorilla Biscuits” in there for their own melodic contributions to Hardcore.

‘Can’t Slow Down’ maintains this whirling melodic Crust Punk aesthetic after an intro subtly toasting the band’s roots. Melodic leads, lines, licks and loquacious melodic choruses are no alien to Hardcore. This is the case in track two. School Drugs can’t slow down as more breakneck stop-starts and meandering strings lace throughout a stripped-back east coast ‘core akin to and audibly tributing Minor Threat. School Drugs are either playing Hardcore that is melodiously inclined or Melodic Hardcore that knows its origin. You decide, but what I can say is that it’s more than sufficient in sequestering your attention. Again, despite this more streamlined polished sound, School Drugs lose none of their urgency. Even with the way ‘Can’t Slow Down’ glides forward, there is no lack of it as the track is nuanced with odes to the band’s harder material. ‘Play it faster’.

‘Plastic Promise’ was the first single from this forthcoming four-stage mourning parade. It is true Josh Jurk’s vocals forgo their modern Hardcore throaty gargle and refreshed OG Punk snarl in tracks one and two. That much is obvious and yet, completely symbiotically so when cut with the whirling melodic tirade. Is it possible that some fans in favour of a more raw Hardcore will find this dubious? I should think so but you can’t deny that this jaunt off the beaten track is skillfully-trod. So, when it is the time of ‘Plastic Promise’, are you to expect the same? No, no you are not.

Track three and the last of the first of four builds on the subtle hints to the past laid prior. ‘Plastic Promise’ embodies the rage found on Joyless and coats it in the brooding gloom of Visitation. The band’s Black Flag and OFF! inspirations merge with what came prior. Three takes the new melodic edge and allows it to run alongside. School Drugs trade all-out pace for angular abrasion. Again, akin to the Joyless, fans of UK Hardcore four-piece Incisions and Chicago natives UGLYBoNES will find something here but exponentially more so. School Drugs are notably more refined and resoundingly more confident. If there were any doubters after two-thirds of this release, this final third will alleviate the dissonance. How? Well, via a restless vitriolic mania from AM to PM trying to make it all work. Life, eh? Think of those tuning those cogs, we aren’t automatons.

There are more coming, don’t sleep. School Drugs have studied Hardcore and are capable of anything. Indecision Records are back to handle this one.