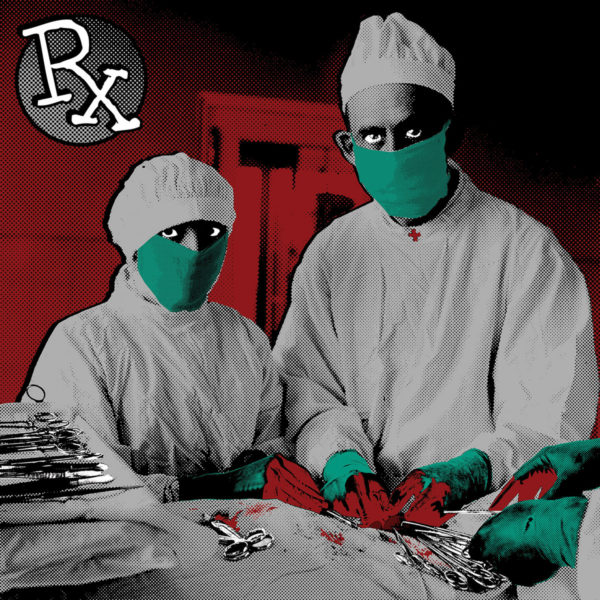 Hardcore Punk will always find a way. The influential early ’80s stylistic is a staple part of School Drugs and their Modern Medicine, alongside an apparent usage of prescription pills and an existence between that initial high and impending purge.

And so, who are School Drugs? Hailing from New Jersey, the band channel the aforementioned dirge and adrenalized variation of ’77 Punk-Rock into something worth dipping into their back catalogue for. However, for now, Modern Medicine opens via its eponymous number and rage against the medicated state that is the US. – ‘I took the pill from my doctor, now the night’s getting darker, now the night’s getting longer, and I’m not feeling better’.

School Drugs match old-school stripped-down Hardcore to the rage of the contemporary issues plaguing the modern human. Hardcore classicism and those oh-so seminal blueprints are poured through a modern, rage-filled and barely structurally sound filter. ‘Pathetic. Desperate’ increases the rage ten-fold. School Drugs let-loose fully before the elements of the Hardcore that would eventually become Skate Punk creep-in rhythmically in ‘Nervous Eyes’.

‘Nothing Grows’ employs a subtle groove and an increasingly more melodic sound. School Drugs alter their dynamic and temperament as they paint desolate pictures in a manner only as successful due to this change in output. ‘Nothing Grows’ is still a sweat-covered Punk track but it partitions the record to avoid all-too-easy repetition. If this album is at all pleasing thus far, indulge in a UK band by the name of Incisions and one of US named UGLYBoNES.

‘Overrated Life’ teases an interlude but instead opts for a shift towards Crust-inclined Punk beset with a warped and haunting Garage-tone. Modern Medicine has shifted away from usual ‘core. The album may have foundationally learnt from such a blueprint but said confines can now barely hold it. The derivative stylistics that are Crust, Post-Hardcore and D-Beat are now forcibly infused into the School Drugs repertoire. See ‘Validation’.

The foundational base of the School Drugs sound is not entirely gone, however. ‘Destined Days’ re-introduces such conditions with the band’s previous deviations. It is at this point of the record that fans of PEARS may well find something pleasing. ‘Gimmie Doubt’ again motions towards Modern Medicine going full-circle as they incite now more than ever to question everything.

‘Wash Away’ carries the stripped-groove of OFF! combined with warped Black Flag-esque Rock n’ Roll leads of the ear-worming variety. The penultimate blast of classic Hardcore Punk is the last-stop before the full-circle completion of School Drugs and their Modern Medicine. ‘Wash Away’ seamlessly ebbs into the closing ‘Joyless’.

The final foray concerns the bitter feeling of its namesake. School Drugs represent what Hardcore was founded on lyrically. The band indulge in the expected political rants but absolutely across aboard stand at their best in the most emotive releases. ‘Joyless’ is both crucially relatable and dark in its naked-emotion and epitomises this fully.  – ‘But please try your hardest to wade through the garbage and if you don’t make it, I’ll see you at the finish’. You can find it and other tracks from Modern Medicine in the EN Hardcore playlist – Here.

In short, Modern Medicine is a Hardcore Punk release that should be required listening in these times. Out now via Indecision Records.

The Sewer Cats and The ‘Zelda’ EP