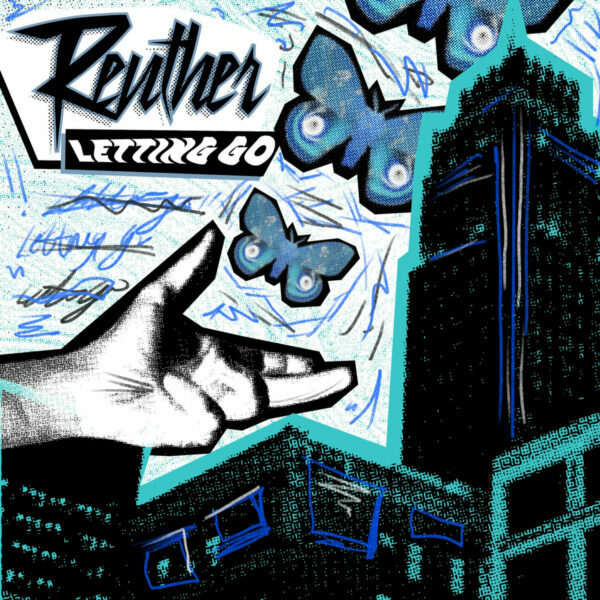 Ah yes, the indomitable and ubiquitous presence of Pop-Punk. This where we find Reuther and Letting Go amongst a genre that like many offshoots of Punk, has morphed, reverted and held on. The genre often gets considerable shade, flak and disregard for a multitude of reasons. This can range from over-production, lyricism and more but in reality, although occasionally founded, it’s a mistake to cast off the genre entirely. This is again where we find Reuther, a band the product of the Pop-Punk environment using the very stylistic to cathartically release. I could be wrong, but I once heard that was music. To Detriot.

The band’s 2018 Like A Ghost alternated between the slow, thick chug of ’90s Pop-Punk, its faster and choppier light drumbeat and then charged off in pursuit of its lineage from Skate Punk. Reuther captured the youthful exuberance of the genre. The band openly embodied its need to express honestly and bare all. They did this in a gritty, driven manner that was stylistically archetypical and rich with attitude without treading the waters of cliche. There was a growing maturity amongst it and that is where the Reuther of Letting Go enter in 2020.1.

‘Outgrown Overgrown’ carries an instantaneously better production as well as a honed voice box. Reuther open with a Home Grown-esque mid-pace edged with Pop-Punk strings over a more robust, rumbling Alt. Rock inclination. The band’s whirling lead into the chorus ties them to their Pop-Punk past in this cry for direction alongside notable and fellow Pop-Punk-led refrains. ‘Outgrown Overgrown’ depending on how you look at it, is either the Alternative Rock-inclined track on a straight-running, ’90s-esque Pop-Punk release or a band pushing the genre into a more rounded sound.

‘Let Go’ cycles into a heavy-set Alt. Rock rhythm on its reflective drive home with the backdrop of existential uncertainty. Letting Go was written with the contemporary US as its backdrop as well as that of the COVID period. Track two’s lyricism and it’s lockdown-centric and contemporary uncertainty echoes the feeling of many and resonates with an eerie ease. ‘Can You Hear Me?’ falls back on Reuther’s Pop-Punk foundation in questionably stark contrast, at least at first. Despite this, the notably heavier-set lows and aggressive jabbing guitars interchange with the callback as the band’s citations of The Loved Ones and latter-timeline (The) Flatliners make more sense.

‘Can You Hear Me?’ I would wager is the intentional meeting point of the band’s now dichotomy sound. Track three is a case for the flexible versatility of Pop-Punk and you’ll play it again and again until you decide. It is also here between 2:42 and the tracks end that the Hot Water Music and The Draft-esque-isms you may have thought you heard very much play out.

The penultimate ‘Spindles’ continues the “Pop-Punk but not really” sound of Letting Go without losing the charm of the genre that drew the band in all those years ago. ‘Spindles’ bluntly boasts more of the same, maintaining the flow of the EP and doesn’t exceed said mandate. That is until the post-1:50. Reuther further their comparatively complex drum patterns warped-leads and general Post-Hardcore-attributing approach before rolling back into their now refreshed norm.

Letting Go represents a band amidst the very process of change. Reuther can be argued to be having some teething issues here but only to the slightest degree. Such an argument can be flipped on its head however as Letting Go is an exciting era for the band. ‘While We Wait’ marks the most coherent sound on the EP and favours the band’s Alternative Rock in a notable comfort. The band’s closer boasts the best and most emotive of the EPs vocal-work and also their most immersive guitar-work quite symbiotically.

Reuther and Letting Go are a testament to what Pop-Punk can become and they’ve only just begun.