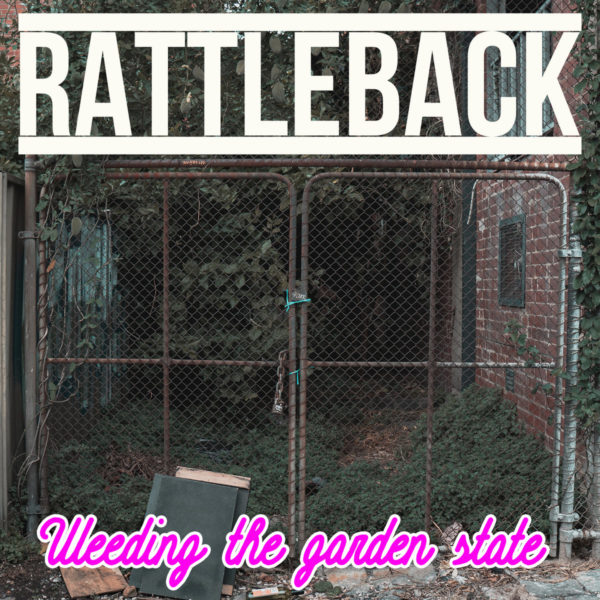 Despite its numerous derivatives, the far-from dulcet sounds of Hardcore Punk are yet to be quelled. Rattleback and Weeding The Garden State are both a collection of cognitive organisms and their respective craft that very much subsist on the voraciously, viscous vitality that is the apparently indomitable genre. The OG tempo of Minor Threat and Bad Brains. The chaotic dirge of Black Flag and the warped maniacal nature of the Dead Kennedys or the rage of fellow Melbournians Outright, the genre’s longevity and legacy is hard to argue against. However, that does beg the question, where does the Rattleback-brand dirge reside?

Despite the genre’s evolution, the vintage approach is never far from whatever apple is chosen. This is something key to the Rattleback sound. Weeding The Garden State is the debut from ‘[…] three dirty frustrated lefties residing in Melbourne‘ and at this stage, its a month old. The bass, drums, vocal-chord tirade begins atop spasmodic Blues-core after a misleading intro. Furthering this, contemporary renditions of inherent Hardcore rage occupy and interchange with warped, lost Blues-esque tones before cycling-grooved OG Hardcore owns the following proceedings. Rattleback embodies the blueprint, but it’s been drawn with a modern pen. And so passes ‘YIP’.

The terrifying trip to the Bottleo is fuelled by booze-filled rage. Rattleback reverberate around their own abject panic and anxiety. The band scrabble for cash and shake with adrenaline to make a cut not fated. ‘Late Night Bottleo Run’ builds into a Black Flag-core filled with a warped, Post-Hardcore-esque rumble as Rattleback filter the older blueprint through another modern scope. The onset chaos that Hardcore lent to heavy and Punk-rooted music is reflected back at what inspired it, resulting in an overclocked blast of Punk that obliterates any opposition in a modest 1:33.

The prospect of having Spiders adorning your penis is not something preferable but it is indeed a combusting situation. This is entirely what is given to us in ‘Spiders (On My Cock)’. The band’s Hardcore reaches a sort of chaotic apex where its inspirations of both vintage and modern collide. Rattleback again, and I can’t keep saying this enough, capture the seminal chaos, insanity and exuberant rage and simply blend it with its latter-timeline compadres. It is here specifically, that drummer Rob also makes his most notable mark thus far, perpetually persisting to propel the maelstrom forward.

‘Juxtaposition’ marks a deviation to the band’s OG US-west-coast centric Hardcore. The genres inherent groove is something that united it but in this case, it leans toward the NYC-Metal-infused core of likes of Sick Of It All, Madball and many others who enjoy a good stomp. ‘Juxtaposition’ maintains warped discordance. However, rather than enveloping you in further spasmodic adrenalised rage, Rattleback imbues their craft with a looming foreboding sense of unstable and volatile dread. Track three, ebbs, broods and builds to a terrifying tantrum you’d be a fool to do anymore to that observe at a safe distance. If this uncertainty is in anyway transfixing to you, I implore you to click – Here.

‘Street Fighting Lipizzaner Girl’ marks a return what can be considered regular for Rattleback. Firstly, track five pushes further and further away from its confines. Secondly, via its position on the record, five brilliantly lays precedent for the explosive 0:47 of ‘Pond Scum’. Rattleback may be devotees to OG Hardcore but yet again extend and branch out. ‘Pond Scum’ looms, lurks and lingers in the window in its damp-Crust Punk and then swiftly departs after enduring the linguistic magnum opus that is the word “Cunt”.

Rattleback despite their abandon and audio-disregard, have more than a serious side. The band’s onset rage on Weeding The Garden State is far beyond its front-facing epidermis. ‘Blame’ exposes the haunting reality too many ignore. Domestic violence is a plague and has been for too long and this exactly what track seven lambasts and sadly has to address. ‘Blame’ interchanges in and out of Powerviolence-leaning Hardcore but only in its self-combusting anger at an issue that shouldn’t be. This is a song that shouldn’t need to exist. – ‘Get it through ya neanderthaline skull – No means, no means no, fuck off’.

As we progress, we regress and lose control. ‘My House (Is No Longer In The Middle Of My Street)’ is a haunting depiction of self-destructive existentialism sponsored by the sardonically playful intro. Rattleback are in a sorry state in the penultimate blast of their violently-cathartic Punk-Rock. Despite a literal plague currently gripping the globe, the lingering, opportunistic mainstays of the modern world squeeze us harder. Mental Health is serious, look after each other. – ‘Depression follows anxiety, anxiety follows depression’.

Rattleback’s Post-Hardcore twisted chaotic crusty-core culminates in their best and last. ‘Disco Biccy Test Kit’ like much of Weeding The Garden State is very personal to Rattleback. However, that is not to say these songs won’t resonate to non-millennial-Melbournians, but the strength of this unabated release is because of its personal conviction. ‘Disco Biccy Test Kit’ combines the varying branches of Hardcore Punk the band have approached into an amalgamative whole. This is a band whose music is not simply heavy as per their chosen stylistic base, but an intrinsic metamorphosis of said base into what is necessary for them to display themselves. This band aren’t one to romanticise.

Or something like that. Rattleback and Weeding The Garden, out now via Headstone Records.