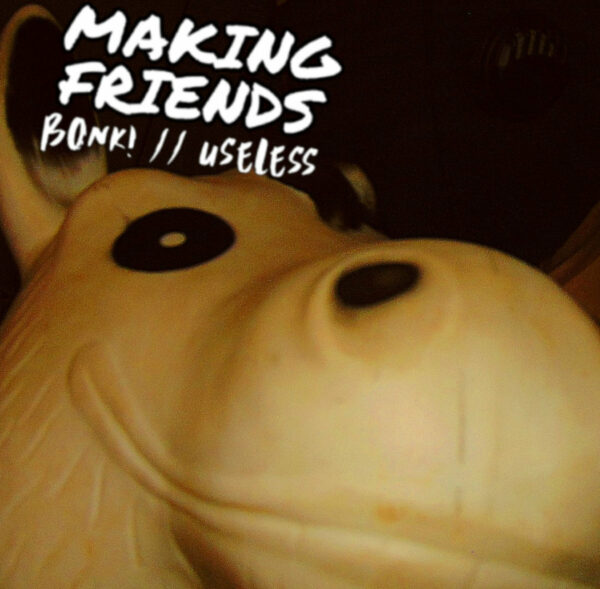 ’90s style Skate Punk. Will it ever cease its indomitable advance? Making Friends and ‘BONK’ // ‘USELESS’ are very much of the opinion of “fuck that”. The Brighton four-piece have something to do with small house-like structures, used to fade away fast on command and likely more. Perhaps my pun-waffle will push further into the band’s history next time but that’s all for now. For now 2.0, I am here to bonk, be useless and make friends – or something like that. Context is a powerful thing.

Making Friends, but a few tempo-ridden days ago, released two of their forthcoming five tracks early on bandcamp ahead of the mainline release on the 19th February. However, the four-piece decided to forsake the norm and unleash their debut noise as one single 1:54 with but a brief serrated-chug separating the existential discombobulation. Shall we?

‘BONK’ is but 0:29 in duration and that’s if you count 0:12 sample. Introduction aside, ‘BONK’ epitomises the very “play fast to clear your head” mantra of the now distant ’90s Punk-stylistic. Making Friends are feeling fed up and their adrenalised catapult-propelled slice of frustration is a brief but strongly-resonating respite seeking its own rest-stop amidst a perpetual cycle. There is no bullshit with the ‘BONK’. The band’s discordant whirling melodic lead and vintage harmonic “woah-ohs” are simply there to give the determined beat something to chase. Think of them as a ray of positivity that may or may not be a mirage.

And so passes ‘Bonk’. Making Friends, as if they are playing live, instantaneously push and segue into the main event. ‘Useless’ rides on a choppy-drumbeat as the band’s rough-cut Skate Punk guitars are now noticeably more melodic. The band are sharp yet melodic ala the anthemic nature of the genre as whole but specifically the proto-Tech-Punk sound of the late ’90s. Making Friends alternate tempo between a fast-choppy beat and that of their resident breakneck norm. Moreover, the four-piece opt for an increasingly layered sound leaving prospective hints on how the EP will follow.

Making Friends have been clever with this early release. ‘BONK’ very much pushed an archetypical sound that was brash, honest and vintage but with ‘USELESS’ they hint at later work while also showing their twist on the blueprint. The efforts between 1:21 and 1:36 ahead of one final heavy-set blast to the slow ebbing revelation only leave you in want of more.

‘USELESS’ treads on the era where the genre was changing. Making Friend’s jabbing precision is disguised as and set between salvos of brash vigour and captures this era wholly. If this double single is anything to go by, the band’s debut is going to be short, fast, cathartic and a bonafide twist.

Making Friends and ‘BONK’ // ‘USELESS’. Out now. Play it loud and prepare. There’s more on the way before the 19th.