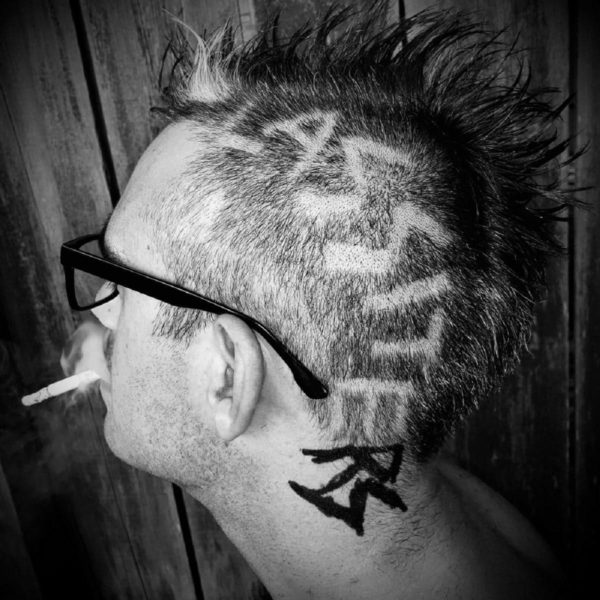 The words “LASSITERS and Their Self-Titled” have (not particularly gracefully) graced Ear Nutrition before. This was back in the now near-mythical, comparatively utopian (but not really) time of 2018 where things were still decidedly shit, but less so. This was a time where their now Demo debut EP was LASSITERS’ only foray into the Punk-a-verse. However, now, in 2020, which quite frankly is going terribly, LASSITERS have returned with an actual eponymous release. Punk bands, eh? *sigh*.

For a comprehensive breakdown, position your thumb or forefinger over – Here. For everyone else, I’ll provide a rapid and succinct description of the London three-piece. LASSITERS-brand Punk is rife with spasmodic time signatures born from either chaotic Noise Rock abandon or Post-Hardcore precision. Splice this with considerable homework within classically-toned Hardcore Punk and you will have a resultant mass of tempo-alternating cacophonic Punk. Objectively speaking, of course.

LASSITERS and their actual Self-Titled displays better production instantly. The three-piece were prone to lumbering groove on their previous release but in this second offering, embrace it and ride it begrudgingly low, dragging over the flow. LASSITERS’ inherent chaos is contained in a manner I had not expected but by the time the change is noticed, said chaos obliterates its confines. The band progress from Dead Kennedys-esque wails and Post-Punk/New Wave inclinations further and further into abject doom. Post-1:20 and then finally, eerie, whirling Crust-esque crescendos escort you unto a level of ferocity impressive even for LASSITERS. The Londoners resign to the extreme-end of where Hardcore can take them and then cut the power entirely. It is here that you remember that this was only ‘Horse Blinkered’; the first track.

The lingering, seminal influence of Jello Biafra does very much that. LASSITERS return to their markedly, insanity-filtered upbeat Punk thick with their inherent quirks. ‘Lollipop Jean’ is as close in proximity to classic Punk and Hardcore as the band get. However, such is completely contrasted by the Noise Rock “why nots” so key to their sound. The track contrastingly displays some of the band’s best work before it falls into relentlessly noisy-gratuitousness. Is that a criticism? Perhaps, but I’ll let you decide. However, I think I can safely ascertain that fun was indeed had on ‘Lollipop Jean’.

In ‘Thrown Wobbly (Rainbow Trout)’, despite their discordant warped and chaotic approach, LASSITERS contrast this facet of their being with further Hardcore Punk classicism. It is clear by this penultimate blast, why this second release differentiates from the first. LASSITERS have split their sound into an approximate dichotomy. Their prominently more “traditional” Punk and Hardcore tendencies are now more obvious and grounded, but it’s never that simple with LASSITERS. To match this improvement, their wild maniacally-charged Noise and Post-Hardcore has undergone a transformation of its own. Herein lies the selling point of the Self-Titled. LASSITERS, through creating a stark dichotomy, validate either side of this sonic separation BEFORE allowing it to symbiotically conjoin. “Throwing a wobbly” has never been so destructive.

The London band truly show off within the final foray of ‘Spinalonga’. LASSITERS despite their on the surface, unrefined chaos, as with their debut, know exactly what they are doing. ‘Spinalonga’ is in fact, emphatic proof of such and in its final 2:50, combines most the above while also boasting the best of this four-track ear-canal rupture. The band’s previous hints at straight-cut Hardcore are at their singular apex and abrasively create friction with their foundational Noise Rock and its own trajectory. ‘Spinalonga’ is at its best, a reverberating blast of wailing-Hardcore Punk that may well be the best of the band as a whole.

LASSITERS and their Self-Titled are exhausting, obnoxious and overt in the best way possible.