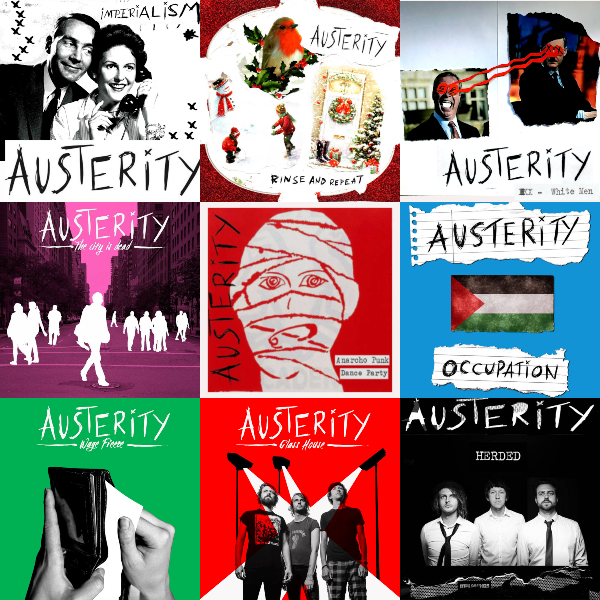 Introducing Austerity. Hmmm, well isn’t that a profundity rich topic in this age of the exponentially increasing Punk music cornucopia. However, despite the looming threat of my incessant waffle, I should think now, a few sentences in, it would be rude to stop and not very “Punk” to simply give up and go home.

Austerity, with both a name like that and the fact that they hail from Brighton, it would be reasonable to assume where they stand. Austerity are a Punk-Rock band, but not just another one. That’s not to say that all you “another ones” are to be negated but Austerity are certifiably going their own way. That said, for those wanting a reference point, perhaps IDLES, Fugazi, Gang Of Four, Wire and varying fellow trends of Post-Punk, Post-Hardcore and the raucousness of Garage Punk will satiate that. Oh, and how could I forget, humorously-toned, sardonically delivered leftist politics and a determined hope for better. That’s important.

After a consistent run of their progressive and warped-Punk stemming from 2016 and a reputation for cathartically expressive live shows, if you remember those, the band have crafted a sound no less than memorable. The band’s run of singles would eventually culminate into their debut, but we will get to that. Austerity subsists on the pain, via an onset and abject fall into the ultra-capitalist, proto-(but eventual)-Fascist clandestine (to some) dystopian hole of smiling despair. *cough* Brexit *cough*. The band indeed feed off it, but repurpose it’s ill-feeling into a defiant stand.

The lyrically short but conceptionally poignant point of ‘Glass Houses’ marks the rambunctious “question-everything” of the band’s collective mind. ‘Glass Houses’ is a blunt, fear-fulled microcosmic-existential gripe. This early-cut is a mass of warped Post-Hardcore-charged Post-Punk and is an absolute band staple. Not only is their sound and mantra forthwith emphatically displayed, but done so in such way that speaks of nothing but an indomitable conviction.

There is, of course, the fact that three-piece’s status as three white men will be seen as a point of contention, eye-roll or impair prospective enticement. But, as you may have guessed, this is something that Austerity own in ‘White Men’. The track can really only be described as a hybrid of Dance-Punk and Fugazi-esque guitar-work, ‘White Men’ stares at itself in the mirror while seeing the stark revelation of the privilege said pigmentation imbues. That, and how the Fascist state of mind is so prevalent. Austerity capture the terrifying comparison between now and the 1920s and 30s through a concise-commentary on its contemporary lineage.

Stylistically, Austerity, although foundationally in love with Post-Punk, infuse an onset Garage-Punk grit and dashes of cathartic OG-Hardcore. The latter is in fact at its best in the adrenalised spasmodic Punk-Rock of ‘We’re Not Evolved’. Moreover, despite this influence being present throughout 2019’s Anarcho Punk Dance Party, it is not always the case stylistically, but also as an onset politically-charged youthful exuberance.

Austerity swims in relevancy throughout their work. As well as Fascism and Capitalism, Austerity also address the now finally in question actions of the human male. ‘Nice Guy’ ousts undesirables through a humourous blast of comparatively melodic Punk-Rock, beset with further spasmodic drumming and outstanding general precision. Austerity ease their points into your cranium without negating their absolute importance and worth.

In a nutshell, the above denotes to Austerity well enough. However, what of 2020? Well, that saw ‘Imperialism’. The band’s 2020 input rolls, rumbles and reverberates with a looming, energetic, low-ridden bass-tone. Such a tone not only permeates the track but wholly infects and corrupts the band’s sharp and comparatively playful strings. Austerity’s message is one via the openness of which the COVID-19 period has presented within the capitalist system. Although we are still begrudgingly part of it all, the exposed nature of this hegemonic system is fostering the questions that will hopefully never cease. Change is more possible than ever and the hope is there.

Austerity created a lockdown-style video for ‘Imperialism’ with a little help and that’s my queue to exit.

Apologies, I appear to have lied. The location at which I will now take my leave is on the recommendation of one Austerity track above all. ‘Aaaaaaaaarrrrrghhh’ is the opening track of Anarcho Punk Dance Party and is of unambiguous importance to the three-piece’s ideology and an excellent break-down of the shit show of the now. Right, now I’m off. Bye.