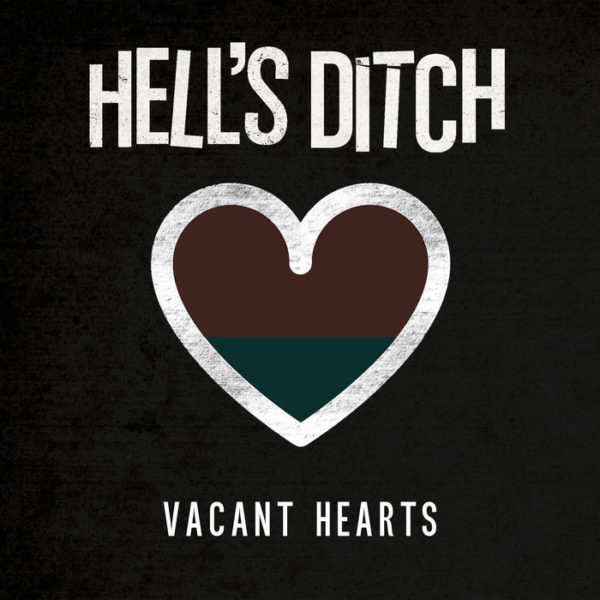 Supergroups. A concept that will likely outlive this stage of humanity and prosper in whatever is next. Enter, Hell’s Ditch and the ‘Vacant Hearts’ single. A band with some considerable pooled experience in the UK Punk and Alternative music scene and a song about admitting and dispensing with ill-feelings. That adds up well enough I’d say.

The band’s collective expertise sees their sonics genealogically comprised of the likes of River Jumpers, Bad Ideas, Dearist, Maycomb, Wisecrack and Knock Out Kaine. So, it goes without saying (but not typing apparently) that the words “infectious”, “heart-felt” and “infectious (but again)” are more than relevant.

The Punk supergroup’s debut single ‘Vacant Hearts’ is as expected, worthy of the above descriptions but also so much more. ‘Vacant Hearts’ is gleefully comfortable musically speaking. Sharp Indie-Punk strings open the way unto mid-tempo back-to-basics rhythms laced with subtle grit. This subsides as the layers build, threaded with a permeating Pop-Punk guitar-line and infectious melody that is going absolutely nowhere.

‘Vacant Hearts’ is an excellent Indie-laced Pop-Punk track that is as chock full of such sensibilities as much as it is a maturity from other walks of life and Punk. The latter point all the stronger as you look beneath the hegemonic harmonies, soaring melodies and collective credentials at the grit on offer.

Hell’s Ditch and the ‘Vacant Hearts’ single, there we have it. The single will be released digitally via all the usual places but more importantly, physically on 7″ Vinyl via the following labels and in various exciting bundles.

Disconnect Disconnect Records (UK), RoseColoured Records (UK) and Bypolar Records (US) have all taken up the mantle and will all be releasing ‘Vacant Hearts’ on vinyl. Each label is releasing a different bundle variation to accompany the single and you can them all linked below.

The Lincoln five-piece are also embarking on UK tour dates between the 7th March and 31st May, including Manchester Punk Festival in April.