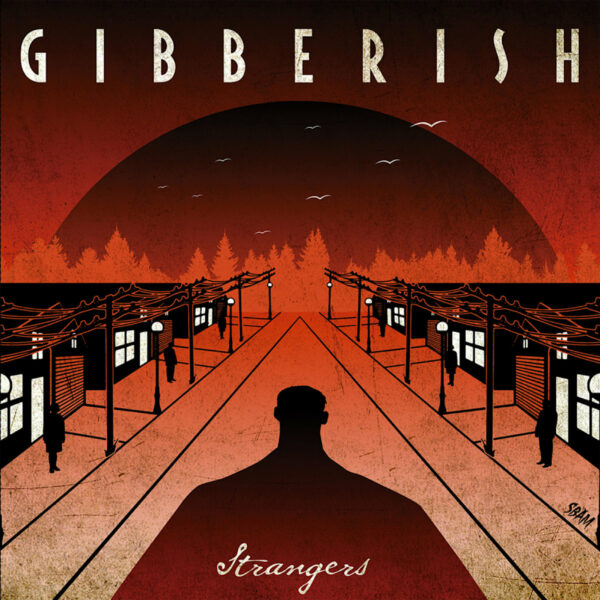 And yet more comes and it is indeed fast. Gibberish and Strangers are yet another band and collection of pandemic defying compositions that are set to appear this August via Thousand Islands Records in North America and Disconnect Disconnect handling distribution in the UK and Europe. But, who are Gibberish? Well, a band that spans borders and transcend sonic logistics. In short, Gibberish are a global band and the epitome of being so.

Alternatively, ‘Gibberish is an e-mail based Skate Punk band formed in 2015 with an American, an Italian, and two Japanese Skate Punk lovers’. Now, the band’s genealogy may well raise some eyebrows. For their four-piece stature isn’t simply comprised of Skate Punk nerds and geeks! The band are descended from the likes of US Pop-Punks Lamonta as well as the fast, relentless and technical Italian Skate Punk and Melodic Hardcore of both Jet Market! and Thousand Oaks. Context done, but fast, Gibberish and Strangers, shall we?

‘Sanctions’ wastes little time. The crisp, precise ease of Alex Gavazzi’s drumming is instantaneously recognisable. Quick-fire technical fills are met with fast Pop-Punk conditioned shreds as the band begin their comfortable straddle. This harmonic Pop-Skate Punk is bolstered and enriched by Chris McGrath’s effortless and seminal vocals joining Kyle Olson’s own intrinsic Pop-Punk tones. Track one is the arguable apex of where Pop and Skate Punk collide and is easily digestible for fans of Much The Same and MxPx. There is, however, despite my regular use of the moniker of “Pop-Punk” above, a pervading maturity.

‘Apathy’ opens on a set of jabbing classic ’94 riffs before falling into what they inspired. Gibberish’s ties to the Pop-Punk of Lamonta is clear and unashamed. That said, the band’s Skate Punk nerdery is never far from the crooning melodious revelations in ‘Apathy’ and its contrasting efforts provide the drive the track needs. Three then capitalises on the drive from its predecessor inspired by faster existentialism with one Hans Roofthooft of F.O.D lending his own life experience. ‘Yesterday’ is comfortable and warrants its use as a forerunner with ease.

Though Gibberish are a Skate Punk band in more ways than one, they ride that apex of fast-melodic collision with ease and again, provide a case for fans of both to singalong together. ‘One More Chance’ is another in this vein and in its way, odes to Quitters Never Win-era Much The Same. ‘Motivation’ either intentionally or not odes to the Sum 41 track of the same name briefly before boasting a technical-Pop-Skate Punk either side of slower refrains. ‘Motivation’ is rife with the tech-shreds, drum fills and exuberantly energetic displays found in Thousand Islands Records bands juxtaposed with harmonies and vocal lines of the post-Pop-Punk world. ‘Lifetime’ darts between ’90s Skate Punk and a cycling and low ridden brash catharsis as the themes of Gibberish and Strangers take hold.

Though adept at contrasting their faster to slower and then harder to more rounded Punk, at times Gibberish tease and leave you in want of tenacious and relentless tempo that doesn’t always arrive. That, however, quite importantly does not imply any loss in quality. ‘My Mistake’ boasts notable meandering guitar lines and more of the jabbing reconditioned classic Punk rhythms that drew us all to Pop-Punk in the first place paired with a determined Skate Punk presence. The band lace their popped-Punk with reminders of their accolades and avid penchants for all things fast.

‘Gnasty’ appears to be aware of any criticism prior. Alex Gavazzi is unleashed again on the best and foremost of the Skate Punk tracks on Strangers. In fact, eight easily sees the band run parallel to contemporaries such as Chaser or Krang. The manner in which Gibberish balance and nuance either side of their sound with the other is nothing but clever. Strangers’ ten-track stature was also the correct move. Gibberish remain consistent, induce no fatigue and avoid the ever-present risk of complacency so prevalent in the genre. ‘Don’t Turn Away’ then glides by consistently as a place holder spun with sharp-serrated edges and choppy ’90s drumming as it serves its purpose.

‘Vans and Floors’ as expected, saves the best until last. Track ten is a lamentation to the past and showcases an emotive guitar tone and set of wayfinding, intertwining and brilliant lines to match. The production on Strangers is so suited to the record that it almost requires no comment. This is what Gibberish are supposed to sound like on their debut full-length. Comfortable and confident.

Digression aside,’Vans and Floors’ is the track you will repeat again and again. The band’s guitar-work is enthralling, harmonies enveloping and precision-cut drums and rhythmic drive hypnotic. Track ten is yet again that perfect meeting point between the fast, melodic fist-pumping and emotive art of the Gibberish hybrid.

Gibberish and Strangers will release via Thousand Islands Records on the 20th August. Disconnect Disconnect Records are assisting with the UK and Europe. You can find all you need below.