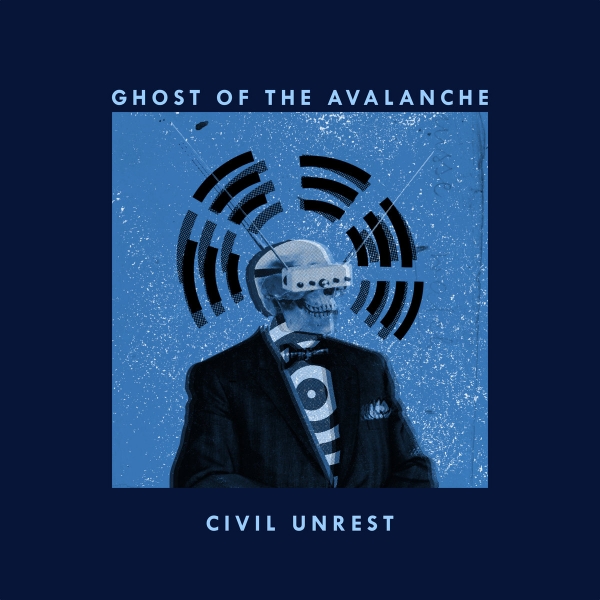 Ghost Of The Avalanche. Four words that are well-known to many around the Bath, Bristol and southwest UK Punk scene. The band’s two-piece formula of bass-guitar and drums produced four mainline releases of Garage Rock infused and melodically pop-ridden vintage Hardcore Punk; known as much for its ferocity as it was playfulness. This was between 2013-2017, during which the band gathered quite the reputation.

However, after the departure of the band’s original drummer, 2018 saw Rob Clark of Bath Hardcore Punk-lot Seven Crowns (Here) fill on drums with what would eventually become a full-time position.

Onward and we are now in 2019, so, shall we – Ghost Of The Avalanche and The Civil Unrest EP.

GOTA’s penchant for Noise-Rock tinted ‘core was always a staple part of their repertoire and in the 0:59 eponymous opener, you are aptly reminded. Following on and standing at a 2:16 duration, ‘Cloak and Dagger’ is the longest on this six-track blast and wants nothing more than to prove to you that its time is being used to the fullest. GOTA were always fast, but then again, the words “double-time” are thrown around a lot these days. This is especially the case when concerning stripped-down Hardcore Punk. ‘Cloak and Dagger’ stills carries those GOTA quirks though, specifically between 1.11 – 1:25 with a surprising refrain against the tempo before the rage incarnate returns.

There is a lot here for the Ghost Of The Avalanche fans of old. Nick Wilton(e)’s love of vintage Hardcore Punk is as strong as its always been and intrinsically fits with the new pace in ‘Vampire Bats’, the track itself simply filling-in but doing a good job of it in 0:51. Given the band’s formula and myself being a long-time listener, it’s the little things. GOTA are still the band many of us know but now employ far more noticeable penchants towards the harder side of their previous sound and with the way it’s being delivered are teasing us all.

‘Not Our War’ is key to this as it rages against privilege and ignorance in a release highlight adding further unexpected melody while still maintaining the razor-edge the band’s Punk-Rock has. It is until this point that the Civil Unrest stands as Ghost Of The Avalanche +.

Prior to five and six, Civil Unrest is simultaneously appeasing older and newer fans, it’s rejuvenated and fresh but still teasing in its increased Hardcore-focus. It’s an excellent EP up until the end of ‘Not Our War’ but still feels lacking, more than acceptably lacking and indeed very satisfying but lacking nonetheless. That’s prior to five and six, that is.

‘Walk With Me’ finally bursts from its confines, unleashing all the rage the band have been only allowing to comparatively seep thus far. Suddenly within mere seconds of the 0:43, Civil Unrest is substantiated. GOTA unleash at their most intense via a dangerous bass-tone and a sonic-fury you didn’t think possible. What makes this even more jaw-dropping is what follows. ‘They Live’ completely repurposes the comparatively playful blast of Noise-Punk-core of the title-track via rhythms far more inline with a vein of Hardcore I doubt anyone would expect the two-piece to attempt.

Find the infamous five and six in our ‘New Old Core!’ playlist – Here.

Civil Unrest was recorded straight to cassette tape, that can be found via DIE DAS DER and the band themselves.

Ghost Of The Avalanche and the Civil Unrest EP, definitely more than once.