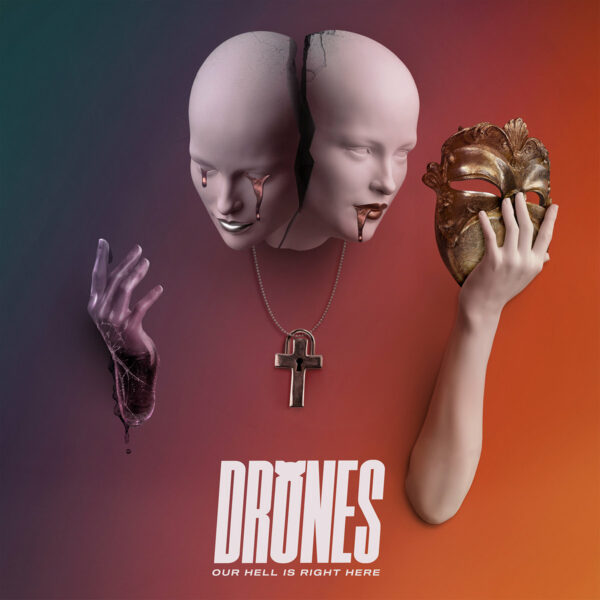 Drones and Our Hell Is Right Here stands as one of the forerunning titles of both Lockjaw Records and Thousand Islands Records to head label’s and the band’s own charge into the breach left behind by 2020 into 2021. The London band’s 2018 debut acted as the foundation from which their poignant and hybridised melodic Post-Hardcore Punk-Rock has been able to stew and mature. Drones have since absorbed this emotionally-evocative comestible conviction. They have redirected its inherent societal disdain into a critique driven forth by a hope for a positive directional change. All the while doing so against a backdrop of an openly personal display. Or am I reading modern Punk wrong? No? Good.

Exiled cut a path of mid-to-choppy tempo melodic Post-Hardcore-laced Punk existing in a state of consistently quotable resonation. Drones perpetually simmered away before bubbling over into both Skate Punk and Melodic Hardcore at the most opportune moments. Thus far, Drones and Our Hell Is Right Here has yielded four-singles and unveiled some forthcoming ‘Fresh Hell’. There will be more on that at the end. 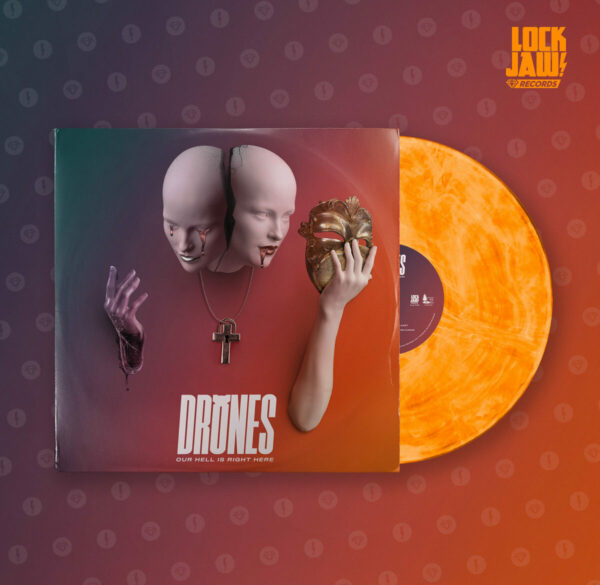 If the previous years have lent any lessons, it is the abject finality of our compromised longevity. Drones are not a shy band. There is no introduction to Our Hell Is Right Here. There is no easing in. Drones spillover from their confines soaked in the preemptive mourning of our black-clad visage, stood against the backdrop of our far from sustainable lives. Religious-esque themes both directly and indirectly, shape ‘Please Vacate The Planet’ while intense, jagged yet seamlessly gliding melancholic and melodic guitars guide the raged-rhythm section. – ‘We are leeches, yeah we are leeches – won’t stop until the blood’s dry‘.

The two-stage intro of ‘Live & Let Live’ odes to the low-lying harder bite of Drones before moving into melancholic self-examination flipped into defiance. Track two is on a bedrock of near-combustive power. The band very much keep this darker side under-wraps and ply their intensity into the release-notable melodic strings. This, combined with the determination of the track as a whole, is brilliantly conveyed by Lois McDougall’s intrinsic lyrical prowess. – ‘Break the mirror, don’t reflect’.

The eponymous ‘Our Hell Is Right Here’ is a forerunner of its very whole. Drones segue in and out of the faster Skate Punk so stand out on Exiled in testament to the now age-old formula matched and enriched by their modern approach. The band also recruit one Ren Aldridge of Petrol Girls to contribute her own tones over heavy-set chugging Hardcore into soaring melodies before charging off. Track three is a cathartic mass that shouldn’t need to be written but its existence is of crucial importance nonetheless in the fight against and in recognition of the abuse of power.

‘Manipulate’ is testament to Drones ability to match the intensity of contemporary Tech-Punk without treading nearer than they have too. Instead, the band move towards much of what inspired it via their penchant for emotionally-evocative Post-Hardcore. ‘Manipulate’ lists-off its grievances in an almost one-to-one honesty as musically the band constantly cycle on the precipice of further combustion. ‘Listen’ is the acoustic curveball and sonic respite but via its dulcet melodic approach doesn’t compromise the records lyrical punch. Our Hell Is Right Here is a societally and globally aware album but its comparatively more personal inspirations are of equal steading.

‘Learn’ is the most recent of the band’s singles. Six is beset with a personal confusion matched equally to the blurred dichotomy between heaven and hell. In ‘Learn’ specifically, Drones approach an almost ethereal-plain with their melodies and it does nothing but suit the emotional poignancy of the release and its own release therein.

‘Josephine’ was the albums main forerunner and further teases of the heavier-beast beneath the band’s cycling Punk hybrid. ‘Lost In Translation’ then injects Drones-brand Skate Punk into the mix just when it’s needed. Eight is Drones shortest track. However, its low-ridden classically toned-Punk-grit to threading lines marks some of their best. It is here that band’s underbelly of Mitchell Thomas and James Kerr are fittingly unleashed. For both Drones and Our Hell Is Right Here really went through it to get here.

Lyrically, much of this is reflected in the deeply personal display. However, in these year-old writings, it goes further. Due to both COVID-19, personnel changes and what I can imagine was an unhealthy amount of Zoom, Drones finished Our Hell Is Right Here the long way. It is no simple marvel then that the album is as cohesive as it is. This is not only an opinion but a sentiment shared by the band wholeheartedly.

‘Epitaph’ is the most musically reserved of the forerunning singles. That said, it is the polar opposite lyrically. Together with ‘Colourblind’, ‘Epitaph’ is a testament to the intense yet seamlessly ear-worming emotive Post-Hardcore-led sound the band now follow. Drones capture the spasmodic nature of the genre opportunely and in a subtle balance. ‘Grey Matter’ echoes the soaring melodies of Zach Blair-era Rise Against while matching the low-ridden jagged Post-Hardcore-Punk thud of Hot Water Music. Despite the band’s choice of singles for this release, I would argue that they missed a trick not unleashing ‘Grey Matter’ as such. For regarding its brooding aggression, bubbling rage, determined anthemic guitars and fantastically attitude rich bass tone, eleven is an unambiguous highlight.

‘Void’ is the releases most symbiotic and intrinsic blend of lyrical, vocal and musical intensity. Following on, the album’s closer is a pure to form early-2000s blast of existential woe. Our Hell Is Right Here is not an easy ride and it was never supposed to be. ‘Warning Signs’ is very much the slap in the face many need once they have finished enjoying the weather. ‘Warning Signs’ is the perfect societally necrotic slice to flank the ‘Please Vacate The Planet’ side of this cathartic sandwich. Our Hell Is Right Here and we need to wake up. 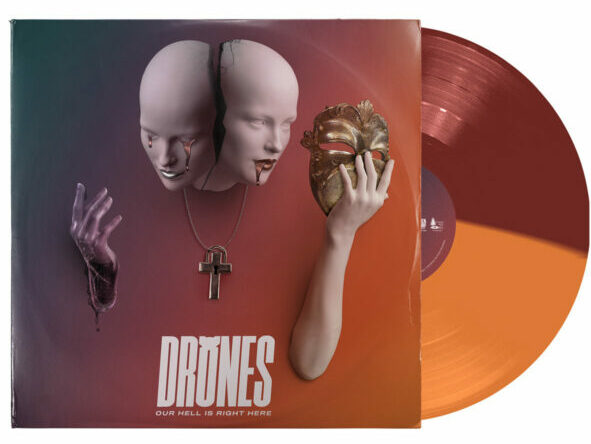 Drones have delivered. Our Hell Is Right Here is not a straight-cut tirade of fast-Punk. Whereas it is true that the band are at some of their most notable when pushing a quicker effort, the real strength of such is the contrast and accentuation it generates. Though immersive and comfortably enveloping, there isn’t a track on Our Hell Is Right Here that isn’t captivating and intense regardless of tempo or surface aggression. Contemporary Punk is still a punch in the face. It’s just rather calculated and pragmatic in the way it goes about it.

Lockjaw Records are handling Our Hell Is Right Here in the UK and Europe while Thousand Islands Records will do the same in North America, with both label pre-orders now live. Moreover, in the theme of Lockjaw being creative with their merch, separately and in tandem with any UK/EU pre-orders, you can procure the sweet, medium-bodied energy powder that is Drones-brand ‘Fresh Hell’ ground coffee.

‘Fresh Hell’ though intense via its name and although dark, is a medium-bodied and surprisingly smooth. Drones-brand energy liquid is bitter enough for those who prefer their coffee to pummel their taste buds but is resoundingly smooth, with a  stong-chocolate and nut-like finish. I could just say it tastes like soil, but that would be a big old lie. Find everything ‘Fresh Hell’ and Our Hell Is Right Here below.