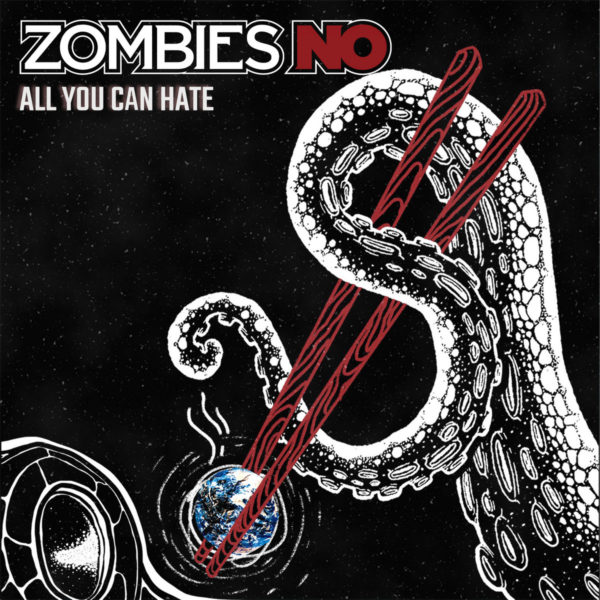 Zombies No are a band from everywhere. Well, Venezuela, France and Italy with a home in the city of Paris. Zombies No entered 2020 with ALL YOU CAN HATE. An EP acting as the latest of the band’s forays into the fast Punk scene with their brand of Skate Punk, Hardcore and an appreciation for Thrash. ALL YOU CAN HATE is the first with the band’s new vocalist and so sees a fresh start in another year. Shall we?

Wholly, one thing that Zombies No are unambiguously good at is achieving balance. ‘Never Surrender’ enters over the band’s refined Skate Punk-cut Thrash. The opener is melodic only but where it needs to be. The band constantly tease a break into fast melodic and jagged Skate Punk both in continuity AND contrast to its verses as the pre-chorus and eventual chorus pound away. ‘Never Surrender’ echoes the jagged European Punk scene on the one hand and North America on the other; with the names A Vulture Wake and Blacked Out cropping up topically. Blacked Out can be found – Here.

‘Into The Wild’ was a forerunning single and for good reason. The band’s Skate Punk sound is now jagged ala this very medium rather than Thrash. Latter timeline Pulley-isms are felt from both Claudio Balest’s vocal output and the late ’90s Skate Punk on offer. It is also here, that said vocalist’s new position in the band begins to feel far more intrinsically at home. I’ll wager that before long, you’ll hear a stark likeness to Bad Religion seep into your ears wholly so, but particularly vocally. Prove me wrong.

Track two is ear-worming and infectious as it moves towards a world that would be devoid without melody. The band’s near-constant stop-start chop and change in tempo adds a welcome variety. Notably, and likely just because, prior to a final melodically led but jagged and abrasive charge into this very wild, Zombies No, from 2:25 to 2:45, bridge us into this with a satisfying barrage of thrashy-Hardcore breakdowns. 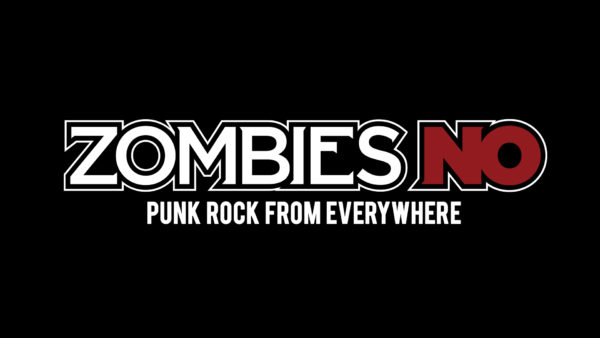 ‘Into The Wild’ was cleverly placed. Why? Well, the aforementioned changes in pace were the vanguard for further stylistic deviations away from an overarching fast tempo. ‘What Went Wrong’ is not a huge departure. In fact, overall, it isn’t really at all, rather only deceptively so prior to the 1:00 mark. ‘What Went Wrong’ not only shows off the technical ability of Zombies No but their ability to capture their audience and emphatically showcase their sound in its cathartically bare-all entirety. The band’s Skate Punk, Thrash and (overall) Melodic Hardcore are fantastic here, but in this new phase, owe a lot of their clout to the “crossed-Ts and dotted-Is” that Claudio Balest embodies.

‘Burn’ (and the record as a whole) is testament to the lasting influence of Propagandhi in a track that again relies not simply on overtly turbo-charged tempo. ‘Burn’ is lambasting greed from a distance as it watches those whose indulgences aren’t as hidden as they assume them to be. ‘Burn’ although admittedly not as attention-grabbing in the first half or at all on ALL YOU CAN HATE, does break into further vintage Skate Punk. I suppose what I am trying to poorly articulate is that this penultimate number takes the place as the “filler” on this release. Truthfully, it isn’t quite as captivating following on from ‘What Went Wrong’ but that in itself is a difficult mandate. ‘Burn’ is the “very good” track on a record that has been excellent thus far. Sample it below.

‘Falling Back’ completes the journey of ALL YOU CAN HATE. This is not just because it’s the closing song but also because it ends the sonic-journey. Zombies No have employed an exponentially more refined and melodic sound on this latest release. The band’s techy-Skate Punk is very much more inclined to such as well as to Melodic Hardcore rather than the prior Thrash. That’s not to say that said elements aren’t present, because they are, but ALL YOU CAN HATE is exponentially and fundamentally more comfortably melodic.

‘Falling Back’ is another addictive slice of anthemic Punk-Rock that just wants a better world. It is rare that I note an EP to be of perfect length, but ALL YOU CAN HATE has managed it. ‘Falling Back’ boasts the band’s best across the board with the melodic guitar and backing vocals making a crucial difference. You can find it in the EN Skate Punk and Melodic Hardcore playlist – Here.