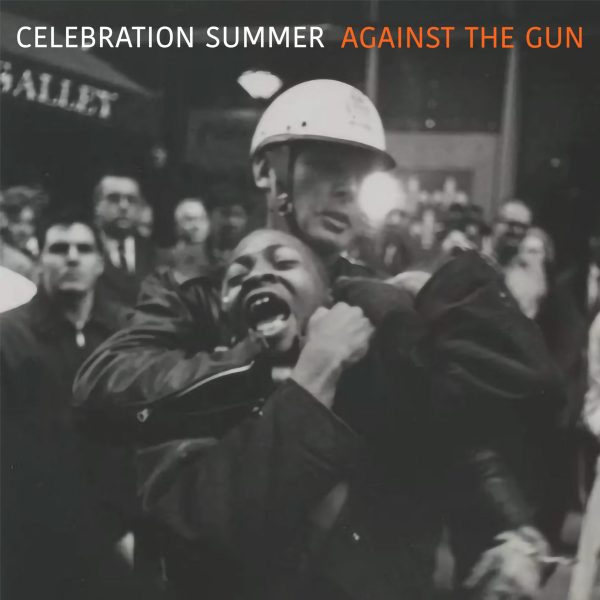 And today, enter Celebration Summer and Against The Gun. The ever-seminal influence of the Washington DC Punk and Hardcore scene and those who champion, propagate and proliferate the fruits of its progression elsewhere can be grouped together under the uncontestable term “ubiquitous”. It is truly hard to knock such a statement, no matter how needlessly verbose it is in this case. The legacy of the likes of Dischord Records and indeed DC Punk, Hardcore and Post-Hardcore, in general, has shaped modern music irrevocably and from trace amounts to full-frontal emulation and adoration. Whilst you can find global evidence of this without too much difficulty, the very beating heart of the movement still has a great deal to say.

Again, enter Celebration Summer and Against The Gun, their debut release. Within seconds of the energetic and fuzzed Punk of ‘Bitter End’, Celebration Summer ply you with the legacy of DC Punk-Rock. After all, the latter timeline but no less seminal sounds articulated as “gruff Punk” and “Orgcore” had to start somewhere. Consider the tones championed by the likes of Iron Chic, Hot Water Music, Gunmoll and countless more, for example. In ‘Bitter End’, the rough cut emotive Post-Hardcore Punk-Rock of Leatherface is echoed in Nate Falger’s vocals, with the inherent fuzz of the aforementioned Gunmoll equally so and not far behind. Pair that with the brash but melodic temperament for Dag Nasty and ‘Bitter End’ aerates its worry with an easy but steadfast bite.

A low melodic line threads through subtle discordance in ‘I Don’t Want To Be Burden’. Even at their most melodic, between the horse vocals and light yet robust rhythm section, CS exude power. Track two is a heartfelt journey of support beset with obstacles depicted through an emotive and indomitable style. The looming layers and alternating time signatures of Post-Hardcore are as subtle as they are obvious in ‘I Don’t Want To Be Burden’ as they fluidly cascade into the rumbling drum patterns of ‘My Devotion’.

Track three opens with a driven, simplistic yet pummeling display. This residing power then moves on to maintain an angular punch before it falls into a sombre, sardonic preoccupied jaunt. This drop into melancholy is something said drum patterns capture and reflect in their energetic, intricate cycle with seamless ease. Much of the “Revolution Summer” crop of Punk as well as the DC scene was a direct and combative movement. The bands of this era rechanneled the evocative power and rage of Punk allowing it to mature and diversify in a scene that needed to do the same. ‘My Devotion’ and Against The Gun in general, capture and embody this Punk realism that continues to pervade the scene to this day. Addictively so.

Against The Gun ends eponymously. Nate Folger offers the best of a best bunch lyrically. With seamless ease, the track’s journey is experienced through its protagonist’s eyes. As far as realistically it can be, that is and to a greater and indisputably problematic backdrop. All the while, a deep, sentient bass rumbles and meaders at floor level, grounding and entrenching the severity of both the tracks catharsis and the melodious but powerful Punk on display. It is also here, that with such a robust and impregnable rhythm section, that both Falger’s and Dan Hauser’s guitars are free to reach their collaborative apex.

This band’s only heinous crime is that their masterful and poignantly powerful Punk is presently confined to these four tracks. Currently, that is, there is a full-length looming.

I may have been late to this one, but Against The Gun is out now via Shield Recordings. Do yourself a favour and press play as persistently as this EP hammers home its craft.