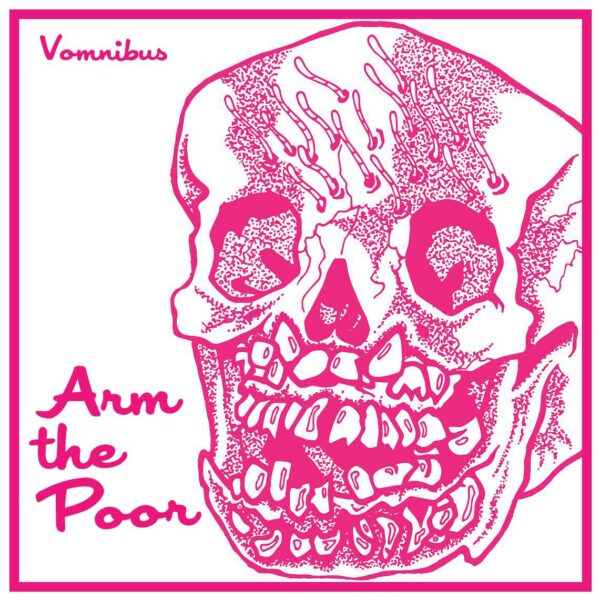 Arm The Poor and Vomnibus collectively mark a band and series of EPs once again unified and cast out into the world in a time where Punk-Rock is all the more required. That year was 2020 and that date was the 5th of December. However, the Tampa band indeed exist further back in the timeline. What is now Vomnibus was originally birthed as From America and Scream & Defecate recorded in 2005 and 2006 respectively. However, that is the past. Now, in this hear modern age of woe the band have got back at and released Vomnibus as a full LP. Onward!

Arm The Poor capture a time where Skate Punk was entrenched, Pop-Punk was just as bonafide and jabbing discordant North American guitar-Ska was omnipresent. Has it ever been that far away from anything really? ‘My Father’s Words’ is an anthem of determination riding a breakneck drumbeat and a warped, suggestive line. Track one is an explosive entry and sets the albums energy requirements.

The discordant suggestive tone of that very meandering lead-line suddenly makes more sense within seconds of ‘Black Widow’. Track two plies an intermittent discordant Ska-jaunt ala Operation Ivy while capturing the grit of early ’90s melodic Punk. Track two keeps the Punk low and the Ska in reserve in a tale of love gone wrong. ‘Ballad Of The Dammed’ then treads on this guitar-ska-ism in its intro before falling into the genre-archetype with ease. Arm The Poor’s inherently fuzzed aesthetic is a key selling point and allows their flirtations discordant-Ska to contrast as much as it does suit.

‘Blood On Your Hands’ is a sardonic jab at American politics that’s as fresh now as I’m sure it was when it was written. Now, those who know me personally will tell you that my taste in Ska and Ska-esque Punk is something I am incredibly picky and strict over. It’s something I openly admit and yet it’s proving to be a valid point outside of myself here. ‘Blood On Your Hands’ is a song for people, who like me, prefer their Ska-Punk as an exuberant yet grit-encrusted punch in the face. Which, is also the perfect segue into making the statement that if you like The Suicide Machines, you’ll likely have bonafide field-day with track four.

‘American Youth’ pushes an early NOFX-esque crash through the halfway point before the instrumental ‘Speakeasy’ does its thing. It is past this halfway point that despite a remix and remaster of the original cuts, that Arm The Poor maintain the charm of early-to-mid 2000s production.

‘Eat Shit’ was forerunning single and another full-throttle display from a relentless rhythm section. Which, is no surprise considering the track’s need to exit the maelstrom of negativity its caught in. Vomnibus is a raucous and fun record but that doesn’t mean it isn’t pissed-off. ‘It’s Not A Tumour’ desists and relaxes. Track eight is Arm The Poor’s greatest foray into Ska. The band near-fully-embody the very flutter that has been supplementing their voracious blasts of Skate Punk with its a welcome and well-placed reprieve. Of course, eventually, the band return to their grounded Punk once again but it’s welcomely more melodic and reserved.

‘Homesick’ is a half-flung return to the snappy, snotty brash-Punk of the former but occupies a space in time far more inclined to Rancid‘s vocal interplay, as well as and the same mid-weight jabbing classic Punk. That said, it is another where Arm The Poor’s rhythm section shines. This is particularly the case post-1:35 where the track drives low in excellent contrast to its melodic earlier self. Arm The Poor may have deviated on Vomnibus, but the aforementioned closing vocal contrast will remind you of how they began.

‘Martyrs & Murderers’ closes an album of incredible flow. Arm The Poor’s splicing of two-previous releases has unambiguously paid off. The very act of doing so is precarious by default but again, Arm The Poor and Vomnibus rise triumphantly anew. Track ten completes the band’s reemergence. Harmonic vocals, an ear-worming melodic lead and a far more vibrant adoration of Ska across the board play-out and close a record now existing as it always should have.

Arm The Poor and Vomnibus. Find them digitally and on vinyl below.