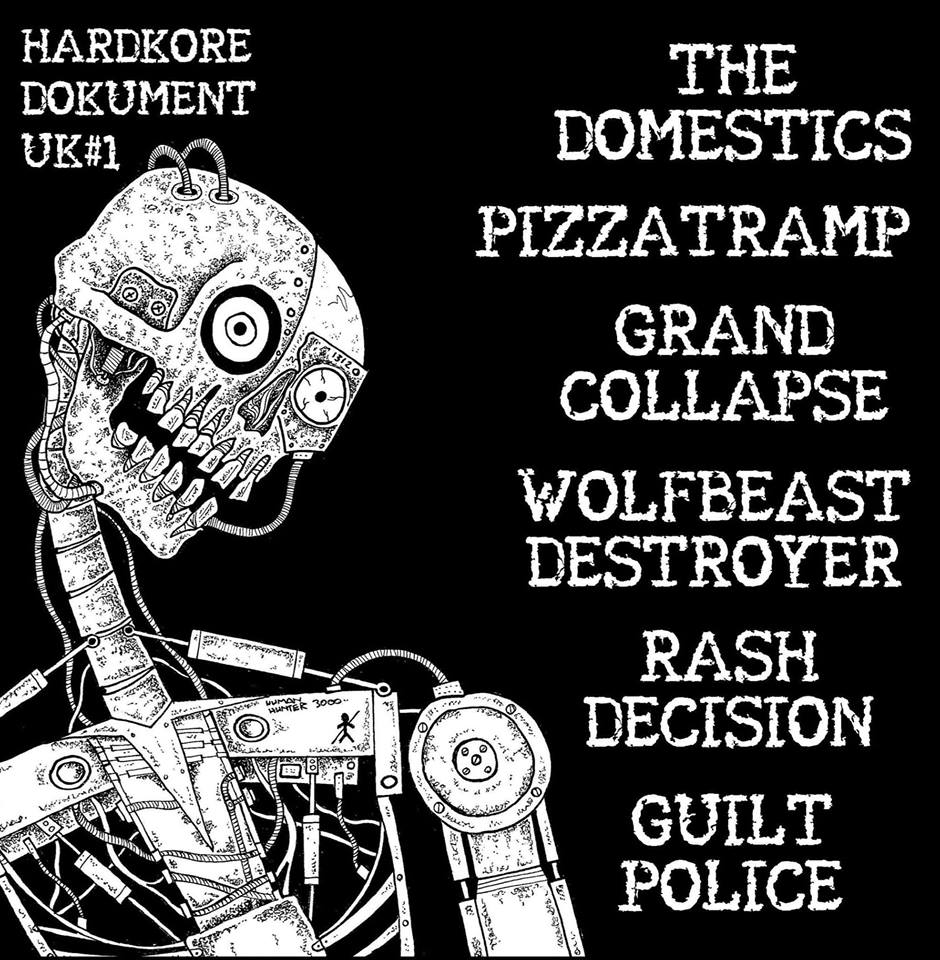 Ubiquitous, omnipresent and fucking impossible to extinguish and nullify. Those are the words I and I should many would use to describe the determined dirge that is United Kingdom Hardcore Punk-Rock. Since the genre’s inception our (not so) great nation has been creating its own variant as much as it has been borrowing others work and amalgamating the visceral noise. In short, what I’m about to try to do justice before release, contains an excellently loud and abrasive way to dust off the last of your hearing-thingies ability to hear things.

(01/02/19) is the day that the Hardcore Dokument 7″ EP will be unleashed via labels aplenty. Kibou Records (UK), Amok Records (Germany), TNSrecords (UK), Sick World Records (NZ) and Mangel Wax Records (Sweden) will be assisting in the carnage with pre-orders now live. 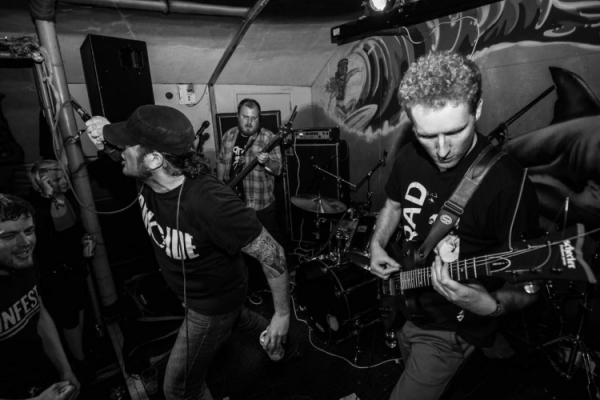 The Domestics are very much a band you wouldn’t want to fuck with – sonically at least. I’m sure they’re lovely humans but the visceral, relentlessly tight Hardcore they purvey is very much one of anger and catharsis. ‘Cherry Blossom Life’ is actually the title of their 2017 LP, which while you’re here, you should make note of post-haste. I digress, ‘Cherry Blossom Life’ the offering to this education 7″ showcases 1:21 of complacency hating Hardcore on point and explosive in a fashion so well associated with this UK Hardcore household name. 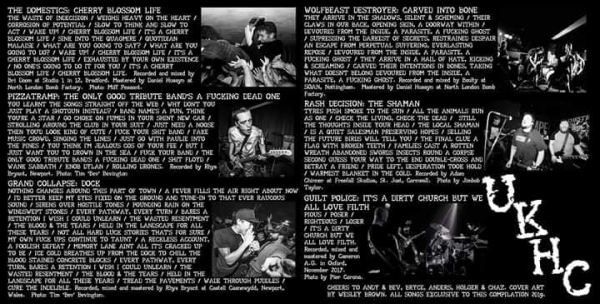 Tribute tracks? Covers? Maybe even sets? There are many dividing opinions on such but when it comes to full-blown weirdly visual resembling obsessives trying their utmost to emulate to the point of it being a little sad, Pizzatramp have an opinion and put forward in the only way they know-how. This is done in a very Welsh set of direct sardonic, sarcastic “fuck-yous”. The band do this via one part US ’80s Hardcore Punk, one part Thrash but via Cadicot instead; the latter being a most important ingredient. ‘The Only Good Tribute Band’s A Dead One’ is a choice cut from a bushel of choice cuts and I really can’t be arsed to describe it any other way. 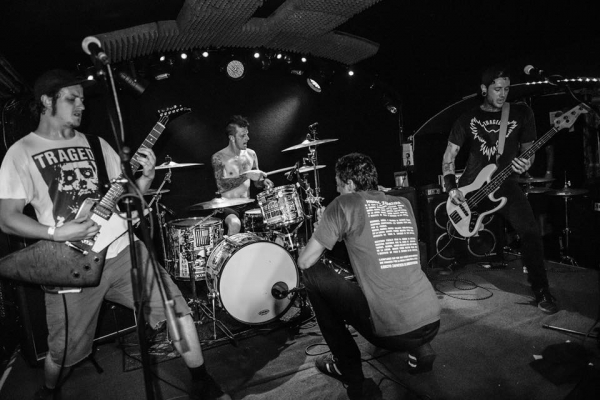 I like Cardiff, it’s a nice place to visit but also an excellent place for underground noise. Grand Collapse are known for their breakneck, Thrash-esque Hardcore Punk and you’d be wasting your time expecting anything else via their contribution to this 7″ inch of chaos. Grand Collapse have always said what they please and ‘Dock’ is very much that. The track’s intro coerces you into a false sense of Skate Punk security with ’80s-esque melodic guitars creating a pre-contrast to what you’re about to hear. ‘Dock’ has flashes of strings less visceral on their own but utterly corrupted by the time refreshed old-school Hardcore is given new life with the aforementioned (now even more) warped melodies allowing it to hit all the harder. 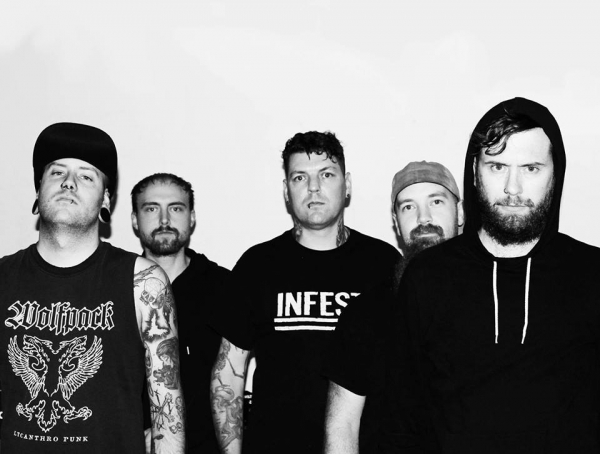 Now, when you are eventually listening to this, wherever you are, the amount you’ve been bobbing your head, jumping about or whatever will be in full swing by the time Wolfbeast Destroyer‘s contribution comes to pass. ‘Carved Into Bone’ is very much as visceral in sound as it would be had you taken its name into a literal action. The dark-melodic guitars are barely noticeable unless they choose to be and the gruff, screamed vocals may well be subdued by the crusty-D-beat on offer but they are also as they should be. The band may not be from the Boston people pretend to support via their headgear, but the Boston they are from should now be far more on your radar after this From Ashes Rise-esque track is over, each time you repeat it that is. ‘Carved Into Bone’ is the best of a best bunch. 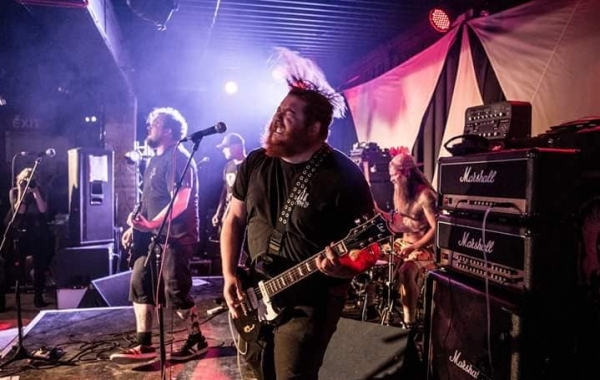 Ahh, Rash Decision. Whenever you hear of the prospect of new music by this collective, another well-established name in the UK Punk and Hardcore scene, you ponder on what vein of explosive unrelenting, ear-drum splitting variant of a chaotic at the very least genre you will encounter. Rash Decision are adept at a very sharp, neck-breaking, spine-shattering brand of fast dirgey Hardcore and are immensely satisfying in their delivery, be it straight forward vintage speed, Powerviolence insanity or strong metallic strings. ‘The Shaman’ is as playful as it gets within the context of contemporary and overt renditions of classic Hardcore. The band are as tight and well-produced as ever but this does nothing to negate the sheer rage they play with. ‘The Shaman’ transcends classic Hardcore and Thrash Metal so expertly matched to words speaking of what is effectively a monetarily controlled apocalypse.

Perhaps it is a dirty church but some people have made their peace with it. Guilt Police take Black Flag‘s blueprint of slow grooving riffs and pair it with more in the way of raspy, low-fi Crust Punk in ‘It’s A Dirty Church But We All Love Filth’. After listening #1 of Hardkore Dokument over and over again for the best part of an hour now, I am once again filled with a sense of hope – dark, angry, puking, sweaty-pit-hope. Guilt Police bring 2:05 of pure adrenaline, only relenting such a beat for a low-ridden groove to match the cathartic screams, before warped, twisting guitars add a melodic flair that scolds your by now hugely impaired but satisfied ears even more.

Do the thing and pre-order. Each of these tracks are exclusive to the release and available from all the bands and labels involved. I need to rest for a while. Perhaps Pizzatramp can write a song about it, for my ears are certifiably fucking fucked.